Annual week of the Italian language in the world: let's go!

The 19th edition of the annual week of the Italian language in the world is starting. The event will taka place from 21 to 27 October. It will be a way to celebrate Italian culture in all its essence. The initiative will be promoted by the Italian Cultural Institutes, Consulates and committees of Dante Alighieri society. The best excellences of our language will meet an international audience. Writers, theater companies and many others will be present.

The Thomas Mann Italian is the "Language of angels". According to a survey, it is the most romantic language in the world. In addition, data are clear. The “parlar nostrano” is extremely attractive for foreigners. Not surprisingly, in recent years there has been a boom in teaching outside our borders. Today it stands as the fourth most spoken language in the world. We have also bypassed French! The language week is a unique opportunity to celebrate Italianness in the world.

Brief history of the initiative

The event was born in 2001 from an idea of Francesco Sabatini. At the time he was president of the Bran Academy. 2001 was the European Year of Languages, and the president decided to celebrate the anniversary in some way. Thus established the initiative dedicated to our language. The organization of the event is managed by the aforementioned Academy in collaboration with the Ministry of Foreign Affairs and all those institutions mentioned a few lines above.

Now in its nineteenth edition, language week has achieved great success over time, involving more and more participants. One of the highlights of the event is a video conference attended by the various institutions around the world. The result is a cultural exchange characterized by a continuous contamination of knowledge and ideas. It is more and more dedicated to the youngestm and the writing competition "Write with me" is held. It is a way to convey the values ​​of our language to the new generations. Only middle and high school students can participate. From time to time, the competition is chaired by a leading figure in the world of Italian culture.

“Italian on the stage”, protagonist of the week of Italian language

The main theme of the XIX edition of the week of Italian language in the world will be "Italian on the stage". In fact, theater is one of the fundamental aspects of our culture. For a long time it was also the vehicle of our language abroad. During the Renaissance period, Italy reached the top of theatrical art in Europe. While the other countries still insisted on staging sacred representations, we began the epic of comedy.

Among the most important authors of the period we remember Niccolò Macchiavelli and Ludovico Ariosto. We could still mention many others. In this period the Italian language took on the appearance of the language of art. All European elites studied Italian. Theater was one of the highest social and socializing events. The emphasis that has always characterized Italian theater will return to pulse. It will be done with a new charge in every corner of the world. Many theater companies will cross the borders. The common goal will be to tell one's stories and passion in handing down the uniqueness of Italian culture. 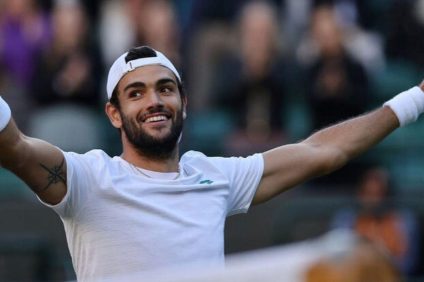 Berrettini in the second round: Italy rejoices at the Australian Open

The Italy of tennis rejoices. Matteo Berrettini accomplishes a feat and beats after four hours ...