“Dear Italy, you learned to dominate time and you infected me.” Natalie

Natalie Portman tells Vanity Fair about the charm of our country, the extraordinarily familiar atmosphere that enveloped her and her family for a whole month in Tuscany. Month he wished would never end.

Paolo Sorrentino, one of the most beautiful minds in our country, Oscar-winning director, writer, screenwriter, has directed the special May issue of Vanity Fair Italia. From the dreamlike cover (flamingos in the deserted night in Piazza di Spagna) announces phase 4 to the town, according to Sorrentino, a phase that could coincide with the return of an idea of possible and different beauty.

Inside the special issue pages of affection for Italy and first-person testimonials of many international film stars. Memories, suggestions that everyone brings with them after contact with our land. Who welcomed them, bewitched.

Testimonies that together are an act of love and a big good luck for the near future.

Really enchanted words are those of Oscar-winning actress Natalie Portman, an accustomed to our country, as she confesses, and unconditionally in love with Tuscany.

When I was 19 – Natalie says – I shot Star Wars: Episode II in Caserta, where the locals shouted love poems to my blond colleague [Hayden Christensen] when we walked to work. At 24, I went on a study trip with friends, visiting Rome, Florence and Venice and noting the different art and flavors between the cities. We ate fried artichokes in Rome, ice cream in Florence, spiced pasta in Venice. We saw the statue of David, Raphael, Michelangelo, Beato Angelico, Tiziano, Botticelli, Piero della Francesca

But the memory that warms the heart of the actress most is the holiday in Tuscany with her family in 2014. A one-month stay that really started not in the best way.

When we arrived at the house, the first thing that struck me was the heat: the damp, the direct sunlight, white, blinding. The streets were empty. “Look, even the Italians leave at this time of year, what was in your head?”, I scolded my husband. I spent the first day hidden in the bedroom with the clay walls, reading Elena Ferrante, stopping only to scold my husband again for not having rented an air-conditioned house.

But then Natalie tells of when, after nightfall, she pushed through the Tuscan villages, first shyly and then letting herself be involved in an unknown climate. Here they are, the Italians, going out into the streets, taking in the cool of the evening.

Time had equally stopped and expanded. We felt like we were transported to another era, where families still lived in the space of the same four blocks, the kids could play freely in the streets, and the grandmother was the most loved person in the family, together with the children. Unknown struck our son’s cheek, played ball with him, so that we could have dinner seated, and they said in Italian words that, I’m almost certain, meant: your son is the most beautiful, intelligent, fun child we have ever had known.

The magic of the place softened me, and I soon began to embrace my husband rather than scold him, admiring the volcano he had learned to make gnocchi, a mound of potatoes with an egg instead of lava.

As long as she persuades herself to play the role of the Italian.

We went to that square every evening for a month. Those evenings seemed to last an eternity, and I felt like we were in 1952. I kept reading The brilliant friend, with the face in the center of the fan that we had bought in a local shop, until I was forced to stop, with anguish, because the fourth novel in the series had not yet come out in English. Our son learned to wear the right team shirt to go to the square in the evening and became friends with children with whom he never exchanged a word, thanks only to football language.

The pages of Vanity Fair return the magic, the spell that our country has been able to exercise on a woman who is accustomed to being well received, pampered in ease, in luxury. But Italy has kidnapped her without pomp, with the enveloping breath of its unique normality. And Natalie’s last words explain it as best we could not.

I realize now that the Italians have learned to dominate time, our greatest resource and also the most threatening enemy. That month seemed like a whole life. And I never wanted to go home, even if we had air conditioning. 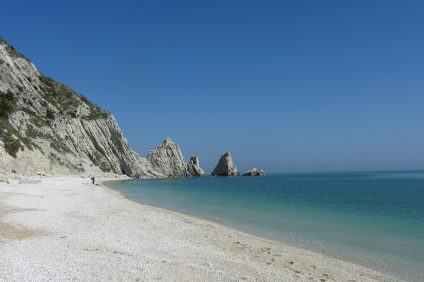 Due Sorelle beach, a real paradise