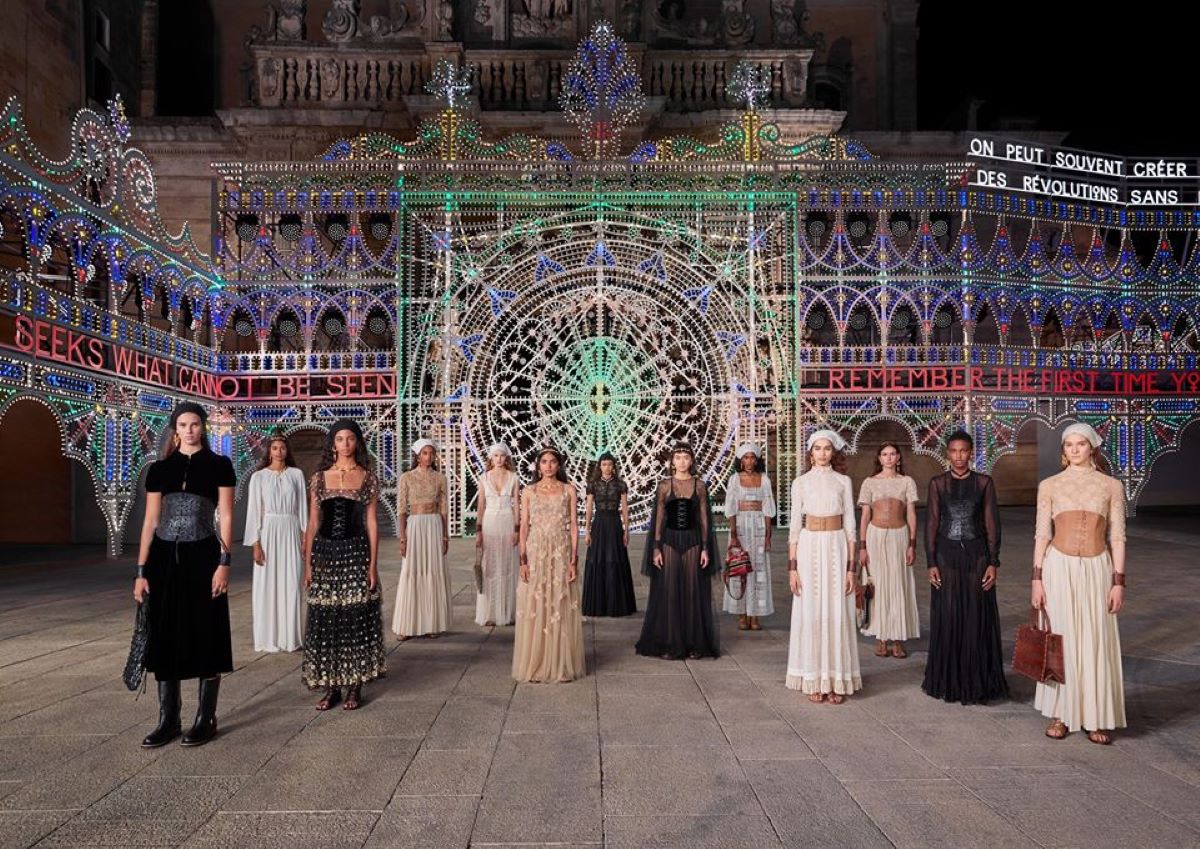 The great French fashion house Dior chose Lecce, in Puglia, to present the Cruise 2021 collection. Fashion show in Piazza Duomo, strictly behind closed doors to comply with anti-covid provisions, but broadcast online, recording dizzying numbers. Puglia was chosen on . The artistic director of the women’s collections, Maria Grazia Chiuri, wanted to pay homage to her father’s land. The one that gave her birth and where she cultivated the love for local craftsmanship. A very special show, therefore, that of July 22nd and not only because it took place under the traditional lights and with the rhythm of the ‘pizzica’ dance. (Dior’s video here).

This wonderful show has enclosed the heart of this magical land: Salento with its culture and craftsmanship. Skilled hands have designed and embroidered the maison’s fine fabrics. We don’t just talk about fashion but about art in its fullest sense. Art that has its roots in a land made of sea, sun, wind and magic. Chiuri was good at staging all this and giving us Dior in a new guise: no longer classic garden flowers but on the clothes the explosion of the wild Apulian nature. An enchanting tribute to Italy, a place of inexhaustible source of inspiration and ardent passion for Christian Dior since 1947.

Lecce is much more than just a tourist destination: it’s the city of Baroque architecture on a warm, sunny and typically summery background. This is where the Dior fashion show came to life. The event was a great success.

The live on social channels recorded 11 million views; 5.5 million saw it on demand with a strong following on the Asian continent. Great satisfaction of the mayor of Lecce, Carlo Salvemini. “Thanks go to our city which has shown that it can be home to a world-wide event.” Among the guests Chiara Ferragni with Fedez, the actress Stefania Rocca with her husband Carlo Capasa, president of the National Chamber of Fashion, as well as the magnate of the LVMH group, Bernard Arnault, who owns the Dior brand. All on the notes of the orchestra of the Notte della Taranta, conducted by Paolo Buonvino, accompanied by the voice of Giuliano Sangiorgi of the Negramaro band.

In Dior fabrics, the skill of craftsmen from Lecce

The collection is a tribute to local craftsmanship. The art of weaving, the splendor of the illuminations, the central role of dance between mysticism and magic.

The Dior maison paid homage to the nature and extraordinary landscapes of Puglia. The artistic director wanted to explore Dior values from a new point of view. To do this, says Chiuri, she asked the artist Pietro Ruffo “to see how the Dior woman could be reinterpreted with flowers other than those usually used by the French fashion house”.

Flowers in Puglia are the rural ones, very colorful. For the Cruise 2021 collection, Ruffo has created more than 250 illustrations in three months. His enchanting designs bloom on a series of models, enriched by the skill of the Dior ateliers. An invitation to travel that recalls the immortal beauty of the indomitable Apulian landscapes.

Bobbin and frames to reinterpret Dior

Chiuri says she was very fascinated by the age-old bobbin technique. Very common in the Lecce area. “It is a work of such beauty and rare fragility. More than an embroidery, I would call it a piece of art”.

The fabrics of the Le Costantine Foundation were used. “Amando e Cantando”, the singular motto of this extraordinary place, is embroidered on a series of skirts that recall its excellence. The headquarters of the Foundation houses the precious looms with which these fabrics come to life thanks to the use of ancestral techniques.

Maria Grazia Chiuri wanted to bring the famous illuminations “on stage” that enhance and sublimate the squares in patronal feasts.

Reinterpreted by Marinella Senatore who added to the work of local artisans, the Parisi Brothers, phrases in support of female empowerment that show how everyone’s work is needed to be able to aspire to a better result. An interesting dialogue between fashion, craftsmanship and contemporary militant art. “It’s important – concludes the artistic director Chiuri – to become aware of how much value there is in craftmanship in Puglia and how important it is, for the new generations, not to lose it, but to reinvest in all this”.