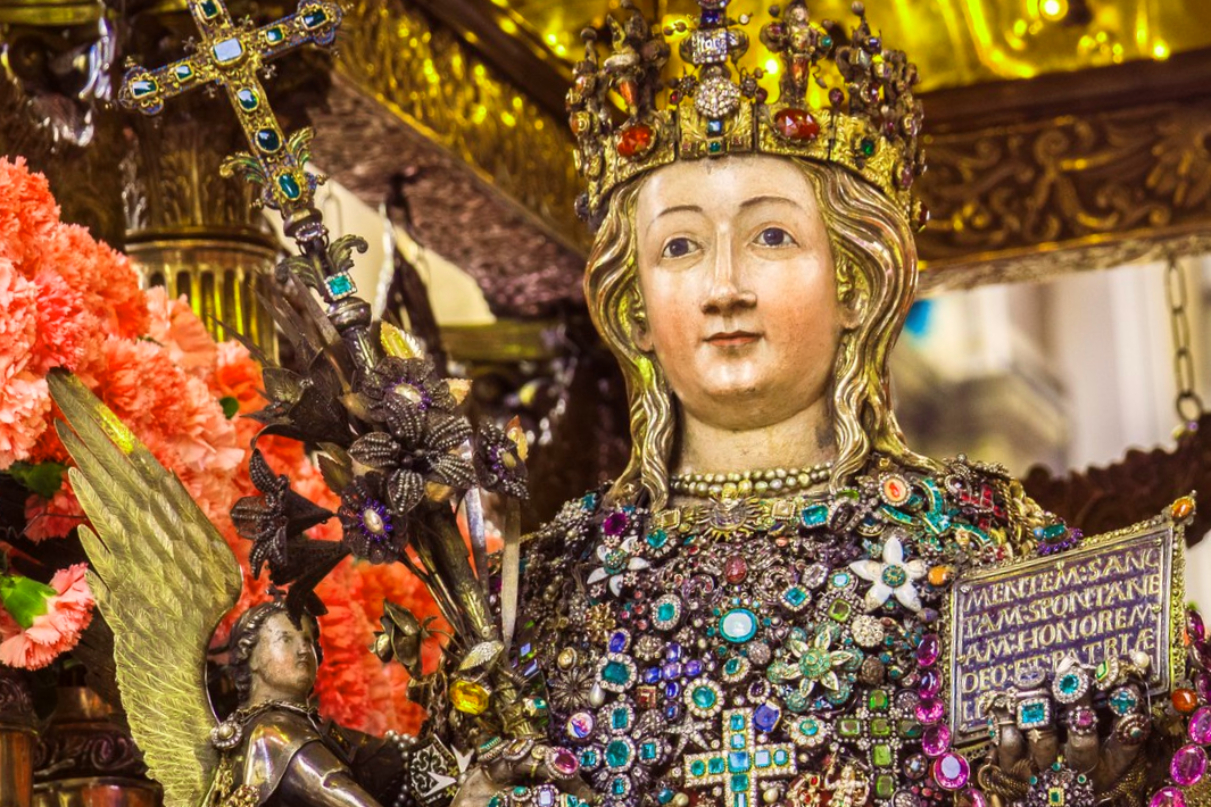 Feast of Saint Agatha: three days of worship in Catania

Feast of Saint Agatha. Three intense days of worship, passion and folklore. The most important religious festival in the city of Catania. The third most important in the world after Holy Week in Seville and the Corpus Christi Festival in Guzco in Peru. A feast that tells of the love of the people of Catania for the Saint, of the virgin and martyr tortured by Quinziano and of the splendid procession declared a UNESCO World Heritage Site.

Feast of Saint Agatha, from 3 to 5 February and on August 17

The feast dedicated to Agata is suggestion, mysticism and religious spectacle. The city of Catania lights up and honors the patroness. On February 3, 4, 5 and on August 17 for the summer celebrations everything is colored. In February the martyrdom by the Roman proconsul Quinziano is remembered. In August, however, the return to Catania of her remains (stolen and brought to Constantinople by the Byzantine general Giorgio Maniace as spoils of war). February 3 opens with the offer of wax procession, born from the relationship between the devotee and the Saint for the request for a grace. An ancient custom has it that the weight of the candle corresponds to that of the devotee. The highest religious and institutional offices of the city parade along Via Etnea, the main street up to the Church of San Biagio in Piazza Stesicoro.

The procession, again, ends with the two carriages of the Senate, with the mayor and other representatives of the Municipality of Catania. Conclusion takes place in Piazza Duomo. Evening, however, is the most loved moment by the people of Catania and tourists. At 8pm from Piazza Duomo, you can admire the fireworks show, followed by the concert in honor of the Patron Saint. Tradition has it that the fireworks serve to wake the Saint up, so that she can prepare to return to Catania. February 4th begins with the Aurora Mass and the blessing of the Archbishop of Catania. This is the most touching moment. The reliquary bust of the Saint, after a year of waiting, is taken out of the sacellum and presented to the devotees. The procession begins along an external route of the city which ends with the return to the Cathedral late at night.

February 5 and the whole day tour

February 5th begins with the Mass of the Pontifical. At 5pm, after the fireworks, the reliquary bust is carried in procession throughout the night. The Candelore (wooden works of art of various sizes and heights and each belonging to a category of craft, district or association) precede it. The procession, with the devotees pulling the feretory by ropes, winds through the main street. In this regard, it is good to talk about the clothing. The devotees, in fact, wear a white sack. According to tradition, it recalls the nightgown worn on August 17, 1126, when the relics of Sant’Agata returned to Catania.

Other key moments of February 5th are: the fireworks of the Borgo; a fireworks display that takes place late at night, in the early hours of February 6th. Sangiuliano climb; the feretory faces a long climb on a lava stone pavement that has large cracks between one slab and another. A suggestive song of the Benedictine nuns; the nuns sing a song in Latin and offer a floral tribute. Finally, the party ends with the return to the cathedral. On February 12, eight days from the whole day tour, the reliquary bust is exposed to give a last farewell to the Saint.

The feast of Saint Agatha is an act of faith, but also wonder and a way to know the traditions of a southern city. For the days of the celebrations, real culinary delights of Sicilian cuisine are prepared. Cassateddi di Sant’Aita and Olivette, desserts made with marzipan. The former, also called minnuzze, refer to the Saint’s breasts ripped out during martyrdom. The little olives, however, refer to an ancient legend. Agatha, while escaping from Quinziano’s men, stopped to rest. Just then an olive tree appeared out of nowhere to shelter and feed her. Another interesting aspect of the festival is that of the ‘Ntuppatedde, a claim for women’s freedom and emancipation.