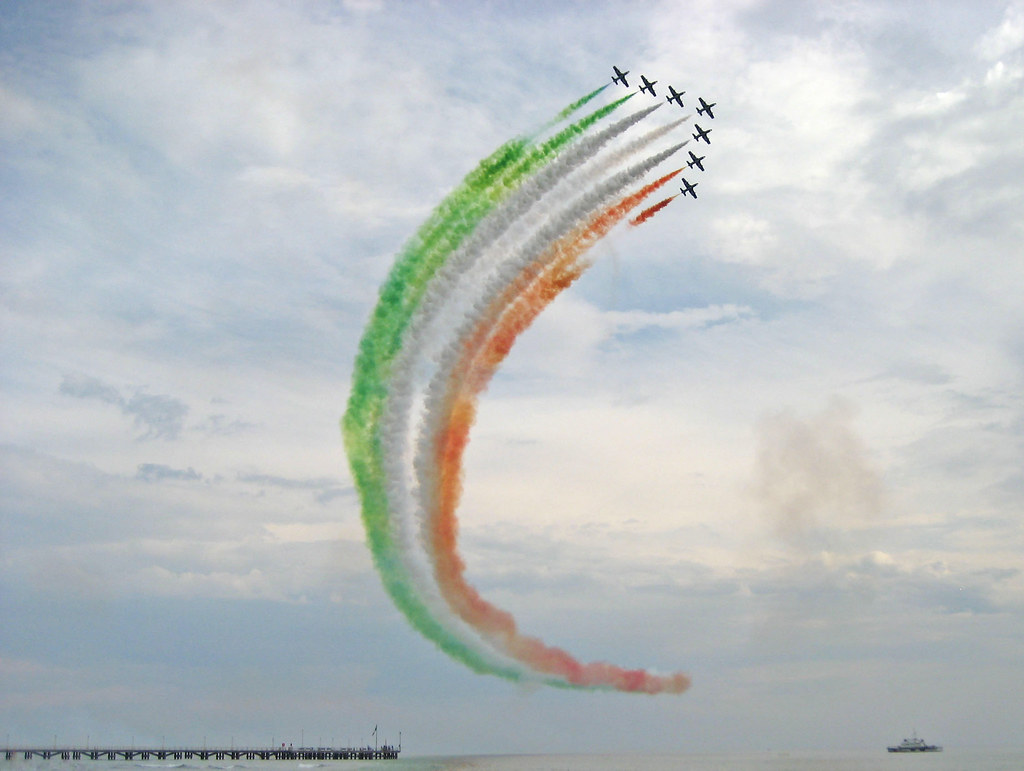 Frecce Tricolori: the world’s most famous tricks in the sky

The extended name of the Frecce Tricolori is National Acrobatic Patrol and they are made up of the 313th Acrobatic Training Group. They have been active since 1961 and color the skies with our tricolor and incredible tricks. The group consists of 10 planes: nine in formation and one soloist. The flight schedule includes around twenty stunts. And the duration of a show is approximately half an hour. Frecce Tricolori, for their extraordinary acrobatics, are indicated as the best national acrobatic patrol.

The first aerobatic flight school in Italy was born in Udine-Campoformido Airport in 1930 at the behest of Colonel Rino Corso Fougier. In June of the same year, the first air show of the Frecce Tricolori was held. During the years of the Second World War, the patrol was dissolved but re-founded immediately after the end of the conflict.

The team was at full speed in May 1957, and it began its activity at Turin-Caselle airport performing at the international aeronautics and space show in Paris-Le Bourget. For the first time, white smoke generators were used which highlighted the stunts even more. And was a success!

The birth of Frecce Tricolori

At the end of the 1960s plans were made to create a specific department as a national acrobatic patrol and not to continue to turn the various swarms. The best drivers in the various departments would have created the Frecce Tricolori team. Air Force General Staff commissioned Major Mario Squarcina to create the National Acrobatic Patrol. The 313th Acrobatic Training Group was born at Rivolto Airport in March 1961.

The Group’s first official appearance was held in May of the same year for a demonstration by the local Aero Club. Unfortunately, a few days later, during a training, there was a clash of two planes and two pilots died. The team with today’s number of drivers was created in 1963 and the possibility of using colored fumes was added in the same year. Aermacchi MB-339 A / PAN MLU, the planes that are also used now have started operation in 1982.

There are three execution programs: high (clouds above 100m and only vertical performaces), low (clouds on 500/600 meters and non-vertical perfomances) and flat (provides for low-altitude aircraft passages). These differences depend on the weather conditions and the area of the performance.

In recent years, when possible, all the performances of the Frecce Tricolori end with the entire group that creates a tricolor in the sky about five kilometers long with “Nessun dorma” by Luciano Pavarotti as background. For this reason, on the day of the artist’s funeral, the patrol paid him homage by passing through Modena sky.
Only the best drivers manage to pass the selections. Each year only one or two pilots, with at least one thousand flying hours, are chosen to participate in the program.

Curiosity about the Frecce Tricolori

Frecce Tricolori are a flagship of Italy and the Air Force. In 2005 the Aprilia motorcycle family created a partnership with the aeronautics to promote its business through the Frecce Tricolori. To celebrate the team’s twenty years in 2010, Pagani Automobili created three models of the supercar Zonda called Pagani Zonda Tricolori. In New York, at the air and naval museum, a plane of the Frecce Tricolori is positioned on the aircraft carrier USS Intrepid.

You can find out more about which cookies we are using or switch them off in settings.

This website uses cookies so that we can provide you with the best user experience possible. Cookie information is stored in your browser and performs functions such as recognising you when you return to our website and helping our team to understand which sections of the website you find most interesting and useful.

Strictly Necessary Cookie should be enabled at all times so that we can save your preferences for cookie settings.

If you disable this cookie, we will not be able to save your preferences. This means that every time you visit this website you will need to enable or disable cookies again.

This website uses Google Analytics to collect anonymous information such as the number of visitors to the site, and the most popular pages.

Please enable Strictly Necessary Cookies first so that we can save your preferences!