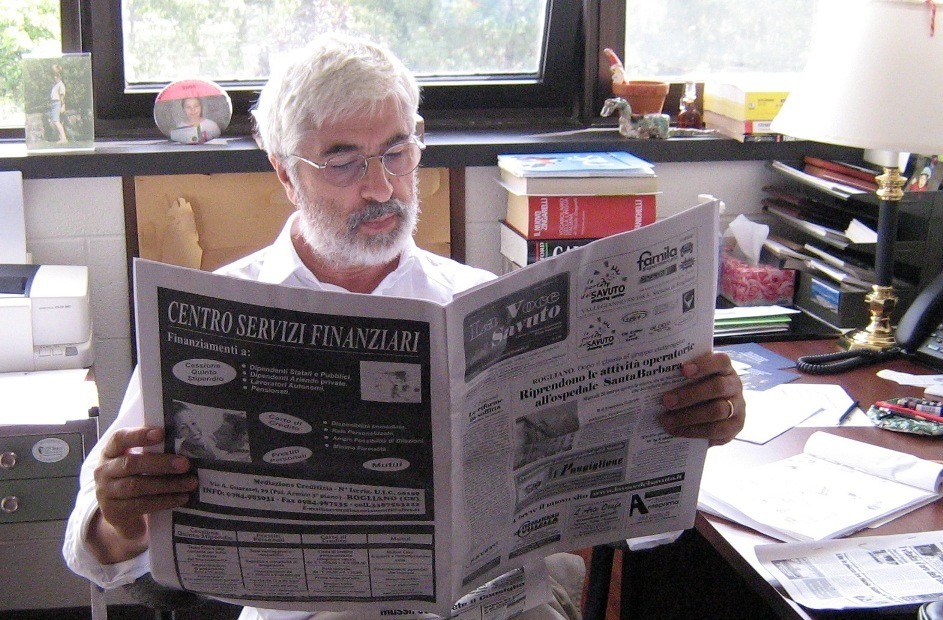 He is a lover of Italian literature and promotes it in Canada and around the world, through teaching and cultural exchanges that he has had for years with some of the most prestigious universities. Gabriel Niccoli is an appreciated university teacher of Italian origins. He has left his native land for several years, but has never severed the umbilical cord that binds him to Calabria and, as soon as he can, never misses an opportunity to return.

A life spent on knowledge

He left in the 1960s from Grimaldi, his village in the province of Cosenza. He was just fifteen when, together with his family, he moved to Vancouver (Canada). Then he holds a PhD in comparative literature from the University of British Columbia. And he teaches Italian language, culture and literature at Victoria and Washington universities. He marries Francesca, a doctor, Italian like him, from his own country of origin, and moves with her to Waterloo (Ontario, Canada), in 1984. They have two children: Pascal and Flora, to whom they transmit their love for knowledge . He teaches at the University of St. Jerome, then at that of Waterloo, where he is now professor, now emeritus, of Italian and French studies and president of the department. He always maintains the bond with his land, also through the lessons he periodically holds at the University of Calabria.

Gabriel Niccoli, emigration and the dear concept of "nostos"

Author of several publications, he also writes essays on Italian-Canadian immigration, a field dear to him, as is the concept of “nostos” (from the Greek, “return”). Recipient of several awards, in Italy and Canada, in 2018, he receives the “Dante Alighieri” Culture Award in Cosenza. He is part of various editorial committees of literary magazines both in Canada and in Italy, and participates in a myriad of conferences from Vancouver to Venice, to Hangzhou (China). At the University of Florence he founded, with his Italian colleagues Concetta Bianca and Enzo D'Angelo, the International Conference on Conservation and Preservation. For his academic and social commitment, he is appointed honorary vice-consul of Italy in Canada, a position he holds for several years. In this interview he tells us more about his work and love for his land.

Professor, what interest does Italian culture arouse in Canadian students?

"Italian culture in Canada, highly appreciated in its most varied facets, be it literature, language, fine arts, music and so on, and not only in the university environment, continues to arouse a great deal of interest. It is considered, by the most educated, mother culture as regards the western humanistic advent. As for Canadian students, it remains a driving force for greater learning of the two official cultures (in addition to the indigenous ones) in Canada: the English and the French ones ".

Italian language is too often mistreated and invaded by neologisms. Language deficiencies are increasingly evident and this is shown by social networks. Do you think it is still possible to “save” it and in what way?

"For university professors who operate in the field of Italian studies abroad, this babelic linguistic barbarity arouses a certain chuckle suffused with irritation. I believe a possible salvation lies in the emulation, by the competent Italian and governmental institutions (Cultural heritage and acrtivities, for example) and academic (I think of the Bran), of the serious and effective measures taken to protect the purity of the French language by not only the Académie française, but also, in a context that is even more familiar to us Canadians, of the government of Quebec. "

Gabriel Niccoli, is the author, among others, of a book dedicated to the writers of the Italian Renaissance. What was, in your opinion, the most representative of that period and why?

"Our sixteenth century has given us a great flowering of female literature, and also protofeminist. In this context, although Vittoria Colonna is commonly held up by most critics as one of the most representative (it was well triggered in the editorial market), I think that Veronica Franco (much studied in North America by young doctoral students) and Gaspara Stampa , are among the most original voices, after which there is always the question of access to cultural centers which, for well known reasons, were minor in the south of Italy. Writers such as Isabella Di Morra and Lucrezia della Valle remain among the voices with the highest poetic resonance ".

In Italy young people continue to leave. You have experienced this phenomenon firsthand, what differences do you see between yesterday's and today's emigration?

"Well, let's say right away that today's young emigrants are mostly graduates, or at least graduated, and therefore leaving Italy for them is a choice, most of the time motivated by the greatest opportunities to enhance their particular abilities and professions. Of course, it is no longer the emigration of the past. Now they are adults who make a thoughtful, forward-looking choice. They are very prepared, and not only linguistically, to face the new challenges. In my particular case, having emigrated very young, I must say that it was a stimulating adventure for me. Not so much, however, for my parents and for many others, who emigrated decades ago, which I have been able to observe over the years ".

The return to the roots. How much are you anchored in the concept of nostos?

“I am completing the editing of a volume with twenty contributors (Canadian and Italian scholars) precisely on nostos in Italian-Canadian literature. There is no doubt that the idea of ​​the return is a supporting structure of the migratory phenomenon. Many studies converge on the fundamental importance of nostos (real or imagined) as regards the construction or evolution of one's own identity, healthy and proactive, in a "foreign land." Personally, I must say that for me, to return, and with a certain frequency, it assumes a value, I would say, vital. It is finding the ego and not its shadow ".

You collaborate with several Italian universities, including that of Calabria. What is your contribution in these cultural exchanges?

"I have been coordinating the exchange agreement at all levels between the University of Waterloo and the University of Calabria for a couple of decades, as well as the" Waterloo in Calabria "program, which I founded. I have also drawn up agreements and letters of intent during my period of representation of the rectors of the University of Waterloo with other Italian universities and institutes, such as Florence, Bologna, Magna Graecia and others. I continue to be privileged by the excellent collaboration of the many dear colleagues of Unical, where often I am at various conferences or lectures. I would like to take this opportunity to thank the former rector of the University of Calabria and dear friend, Giovanni Latorre, for strongly wanting this agreement. "

You have been honorary vice consul of Italy in Canada. What satisfactions has this assignment given you?

“Now that I have left the position for reached age limits, I say that one of the honors of my life has been to represent Italy in an official capacity. In the six years of my service to the homeland, I could really mention many opportunities to great satisfaction: from the great official meetings that the office has given me the opportunity to experience, to the great and precious humility of some users who have greatly enriched my sense of Christian Humanitas. Particular satisfactions were: having made the purchase possible of Italian citizenship to young athletes, who have thus been able to play professionally in Italian hockey and soccer teams, living in the places of their ancestors ".

Grimaldi is your home country. What are the most cherished memories of your land?

"The soul of the place, the sense of the place Grimaldi, its flavors, its colors, the view of the village from the top of its mountains, the scent of broom, and violets in spring. But also the solitary walk in the quiet of the cemetery, along its paths, a prece to negotiate a dialogue with our dear departed. And I could go on. It would take the words of our great anthropologist Vito Teti, words that I unfortunately do not have. And then, of course, the memories of childhood, when the "Grimaldi world" was ancient and fabulous ".