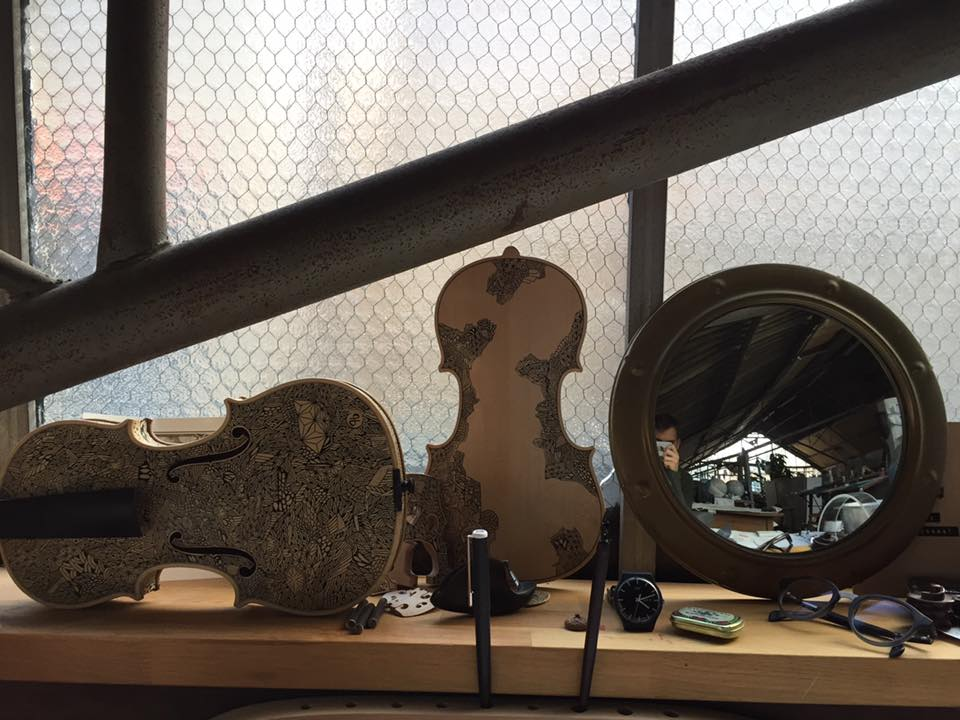 Leonardo Frigo presents the Inferno of the Divine Comedy painted on violins. According to the artist, Dante’s masterpiece taught him to dream. In the same way today Frigo realizes a project that combines music, literature, design and craftsmanship in a single piece of art. In fact, art is something ineffable, which we cannot explain in words. But it is also something we need in our life, as we need dreams.

Leonardo Frigo and his project

There are many artistic projects under construction for the celebrations of Dante 2021. Leonardo Frigo, an artist of Venetian origin who lives in London, succeeds in his project to combine music, literature, design and craftsmanship. In this way Leonardo combines his dream of painting with his passion for music. According to Frigo, it is possible to combine music and art, his greatest passions. The artist explains that he loves listening to music while painting. In the same way, Frigo starts from the love for classical and traditional music to start painting on violins and cellos. This was the beginning from which the idea that inspired the artist was born four years ago. In fact, from his love for Dante Alighieri‘s masterpiece, in particular Dante’s Inferno, he began to create a colossal artistic work.

In short, Leonardo Frigo has been painting 33 violins and a cello, on which he creates the illustrations of the Cantos of Inferno. Each violin is dedicated to a specific canto. Above all, the artist showcases symbols, scenes and key characters of the work. Leonardo loves to think that in this way his art is read like a book. On the other hand, his work comes from a deep study that has roots in his passion for reading, for art. In particular, he has a passion for Dante’s masterpiece. In fact, Dante’s Inferno has been inspired him since he was a child.

Leonardo Frigo dreams of bringing Italian culture into the world

In addition to the study and inspiration, each violin has a descriptive text, both in Italian and in English. This serves in particular to highlight and analyze everything in detail. In fact, the goal of Frigo is to be able to share the project with many people. In fact, many people followed his example starting painting on violins. And they send photos and ask for advice following Frigo’s work on social media. Leonardo’s project is also on Instagram where it has over one hundred thousand followers. In addition to social media, his work was previewed in London. In fact, Leonardo has created his own exhibition at the Royal Institution of Great Britain museum in Harrods. Above all, Leonardo dedicated the Piccadilly “Bond Street Awards” event to celebrate the seven hundred years of Dante’s death, which will fall in 2021.

The whole collection is not a simple result of a creative work. In fact, it stems from Leonardo’s desire to share, promote and spread Italian culture all over the world. We often talk about innovation. In particular, we refer to avant-garde means and technologies with which the contents are offered to the public. But innovation, according to Frigo, is also sought in our ability to create new experiences capable of involving and presenting something through a different point of view. The idea of the artist is to create a traveling exhibition. In fact, his desire is to start from Italy and then share our culture abroad. In recent months he has been organizing and collecting proposals to exhibit the project in Ravenna.

The contemporaneity of Dante Alighieri

Leonardo Frigo’s project embraces the memory of the Italian Great Poet. In fact, in 1321, between September 13 and 14, Dante Alighieri died. In 2021 Italy wants to remember this important anniversary. It is a dutiful tribute, above all.

For the celebrations of the seventh centenary of Dante Alighieri’s death in Ravenna, Frigo dreams of bringing his violins there. Ravenna as the first stop on a national and international tour. In fact, we still read the Comedy today. First of all because it is a perfect work of art. Then also because Dante created a fantastic world that is entirely plausible and coherent in its functioning. But we still read it also because the Comedy has a profound message that still interests us. Divine Comedy is not art for art, it is art for life.