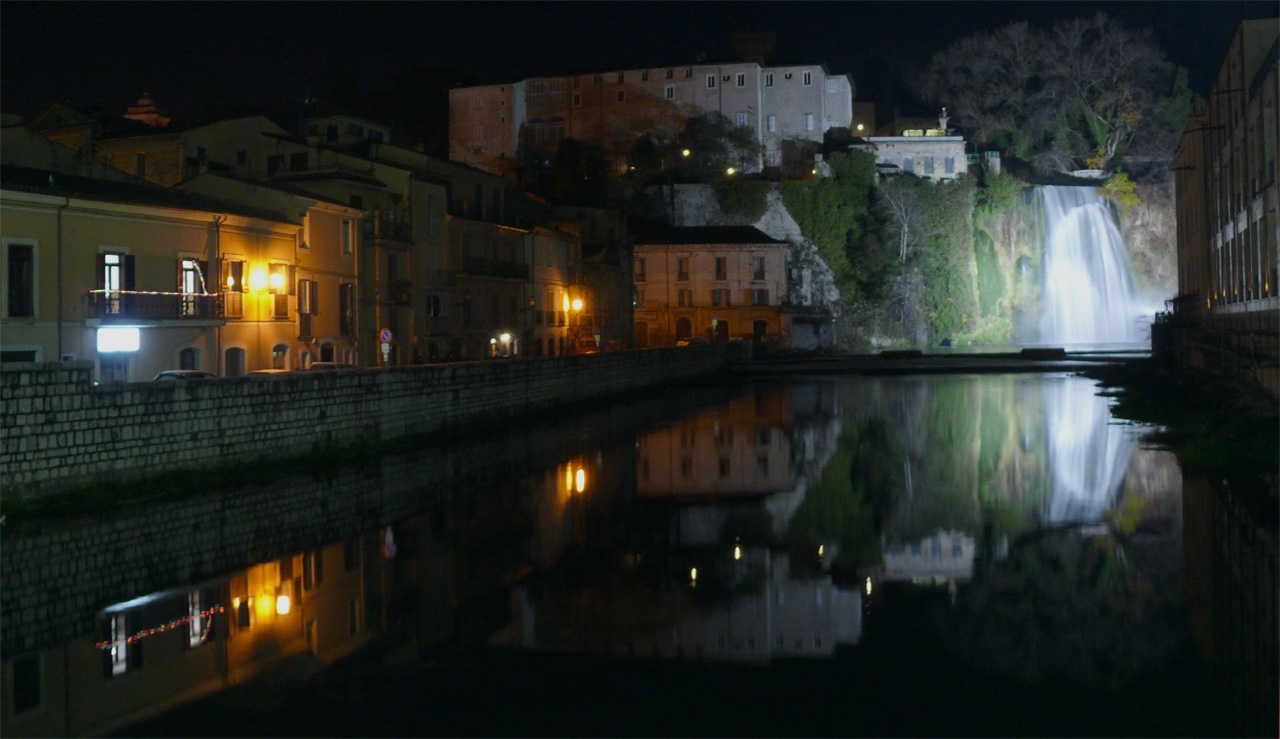 Liri Island waterfall is extremely representative of the frusinate city. It is a unique city in Italy, characterized by a natural waterfall in the town center.

The waterfall of Island is a suggestive place, which is really worth visiting. It is one of the most fascinating places in a Ciociaria itinerary, to discover the most interesting places in Lazio. In this small town, the Liri river creates a natural setting, forming a real Iceland.

Tourist can see the Great, or Vertical, Waterfall which, when it is full, has an unrestrained flow, and the Valcatoio waterfall, twenty-seven meters high. This is possible because the river is divided into two arms where the Boncompagni Viscogliosi castle is strategically located, giving rise to two natural jumps. The left arm flows into the Great waterfall, imposing and much more scenic, compared to the waterfall that is formed by the right arm. Valcatoio waterfall is less spectacular because the waters are captured to feed an electricity production plant; the jump is not perfectly vertical, but a little inclined.

The river that originates and descends sinuously from the plain of Sora, creates a sort of island in the city center known for its waters. The historic center of Liri Island is one of the most photographed places in the surrounding area, and it is really worth admiring it at sunset; when the colors and the lights form an indescribable spectacle on the waters. Because of the abundance of water, in this territory there were power stations and paper mills that left a trace of modern archeology. Recently, an old Béranger-Coste paper mill has also been brought to light, the ideal site of the “Museum of the Civilization of Paper and Telecommunications”. Reliving and rediscovering what was an important paper tradition of Liri Island means touching the history of the Ciociaria area. Suggestive and pleasant is a walk towards the River Park.

The Island waterfall at the Louvre

With a pleasant walk from Corso Roma to the Fluvial Park, among the remains of ancient paper machines; until you gain one step after the other at the Cascata del Valcatoio. A day is more than enough to admire this Ciociaria town located between Sora and a stone's throw from the Abruzzo border. Typical restaurants can make your stay very pleasant with the typical Ciociarian cuisine. Many artists also entertained themselves in these areas, painting the famous waterfall, such as Philipp Hackert for example, who painted it when returning from Abruzzo. Gold I. Bidault, whose painting depicting Liri Island, is exhibited in the Louvre Museum in Paris. In Liri Island you can visit the Boncompagni Viscogliosi Castle, which was a medieval fortress, once dominating the whole plain. The castle once protected the valley, and today it shows beautiful frescoes, with a splendid park.

How to reach Liri Island

The tower of the fortress that dates back to the fifteenth century is very impressive. The castle is private and can be visited only on certain occasions. Why not pay a visit to the Church of Santa Maria della Forma, to the Church of the Madonna delle Grazie, to the collegiate church of San Lorenzo Martire. To reach Isola del Liri just take a bus departing from Rome Anagnina direct to Sora, or take the train to Frosinone. From the capital ciociaro you can take a bus to Sora. There is also the Avezzano-Roccasecca railway, starting from Roma Termini, changing at Roccasecca. The station is located in Upper Isle, not the Lower Isle. Those traveling by car and departing from Rome, can take the A1 motorway, Frosinone exit. You can take the SS of the Lepini Mountains towards Sora and, after covering the Frosinone-Sora highway, exit at Liri Island Ovest.