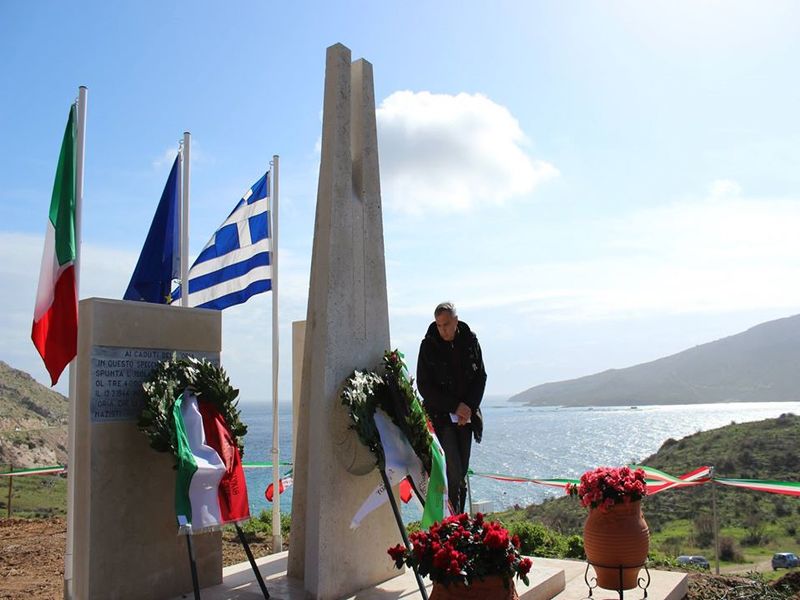 On February 9, 2020, the Italian Embassy in Athens organized a ceremony on the site of the Monument to the fallen of the Oria in front of the island of Patroklos. The first trees of what will be a memorial park have been planted on this occasion. Participants included religious, civil and military representatives from various countries as well as Italy and Greece. We will tell you about the spirit of generosity and brotherhood of Italians and Greeks together, and we will do it from the voice of some of the protagonists. Three men who organized an underwater expedition on the site of the Shipwreck of the Oria to pay tribute to the victims and their families.

The story of the shipwreck of the Oria

It was February 11, 1944 when the Oria steamship sailed from Rhodes. The boat – weighing two thousand tons – heads towards Piraeus. Over 4000 Italians are on board, together with ninety Germans and a Norwegian crew, in complex circumstances. In fact, these are Italians who have refused to join Nazism. The steamship sails towards its course and the sky seems to metaphorically put itself in symbiosis with this sad circumstance. A storm begins, the waves were slapping. The sea sways against the rocks, there is only the rumble of deaf waters. There is a shipwreck. We do not know what the over 4000 brave men on board thought, but we do know that their memories rest on that seabed.

Citing Neruda “look for what the sea has broken up with unnecessary insistence, what has broken and shaken and abandoned“. It is February 12, 1944 and the steamer sinks at Cape Sounion. It gets stuck in the seabed in front of the island of Patroklos and begins to take on water. Due to the difficult weather conditions resues come late, more than two days later. So only Commander Rasmussen, the first engineer officer, thirty-seven Italians, six Germans, a Greek and five crewmen manage to escape. Ten years later, two hundred and fifty bodies were dragged to the coast and later hosted at the Shrine of the fallen of Bari overseas. The joint generosity of Italians and Greeks will make it possible to obtain a commemorative site. A generosity that begins with the collaboration of three men we tell you about.

Inauguration of the Monument to the fallen of Oria

On February 9, 2014 a monument to the fallen of the Oria was inaugurated in Greece. “The memorial was a great idea and it endorsed the great relationships between our people, trying to forget the wounds of the past. It is nice to see it there to remind people of situations and events that it is difficult to understand today “- Aristotelis Zervoudis tells us. In June 2018 Zervoudis – a Greek diver – received the honor of Knight of the Order of the Star of Italy for his crutial contribution in searching the the shipwreck of the Oria steamship. “Although during that war Italy and Greece were enemy nations, our people were always similar in behavior and attitudes and shared common interests. I hope we will not face similar situations in the future. Personally, Oria gave me a ‘new’ family, I met people who respect each other “- he continues.

Michele Ghirardelli – spokesman for the network of missing persons’ relatives – agreed with him: “The story of the Oria Network has shown that it still exists (or perhaps exists today in the globalized world), a strong way of feeling, of communicating, of being together. The most striking thing, in a network that now gathers thousands of people, is precisely the speed and spontaneity with which true and strong ties are created. Just communicating, or seeing each other a few times in a year. It would not be an exaggeration to say that a family has been created. With a level of affection, confidence, trust that sometimes I don’t even have with the company i keep every day “.

“I found the name of Aristotelis Zervoudis, who had found the wreck of the steamship Oria by searching and I contacted him”, said Luciano De Donno. He is an historical researcher, – Federal Instructor F.I. P. S. A. S. – has organized and participated in numerous underwater expeditions. “Zervoudis brought introduced me to Michele Ghirardelli, exponent of the network of family members of those missing in that shipwreck”.

“We went to the place with Aristotelis, after obtaining the necessary permits, and there we saw mess kits, bones, remains, everyday items of those people. We stopped at 20-25 meters deep”. In 2011 Luciano De Donno joins the research. Together with Michele and Aristotelis they lived an experience that they will forever remember: “The relationship with Luciano and Aristotelis was the first indication of an irreplaceable and unique human experience”, Ghirardelli states.

“We did something extraordinary, its difficulties seemed insurmountable until a few minutes before. Then, everything got stuck in the right place and at the right time. If I think about how much Luciano and Aristotelis have already spent on time, money, energy, sometimes I feel almost guilty. None of them has family or institutional involvement. They have done all that out of pure generosity” he continues.

“I remember our preparations even before Luciano and Michele arrived in Athens, their emotions when we were ready to dive – cliams Zervoudis. Since those dives were the first to be made by the Italians, I will always remember their desire to let Italian people know this story and motivate the Government. It has been very exciting, but the greatest emotion was to put the plate on the bottom to honor the fallen and put the Italian flag on the top “.

The shipwreck of the Oria steamer: a face to the fallen

Faces and events of over three hundred missing have been reconstructed; to be exact 343 up to January 31, 2020. By now the thread of memory is reconstituted and the important thing is to continue unraveling it. We tell you of one of them who can symbolically represent them all in this article. So ask Michele who his grandfather was. “My grandfather was a 29 year old guy. He had already completed his military service in 1937, but as the war intensified, he was called again. He was reinserted in the engineering departments, as a “militarized craftsman”, also for his profession as a carpenter. I think he thought about anything but war. I still wonder how he smiled in that only photo that portrays him, with his wife and daughter, about to leave for the front. Maybe that’s true heroism. “