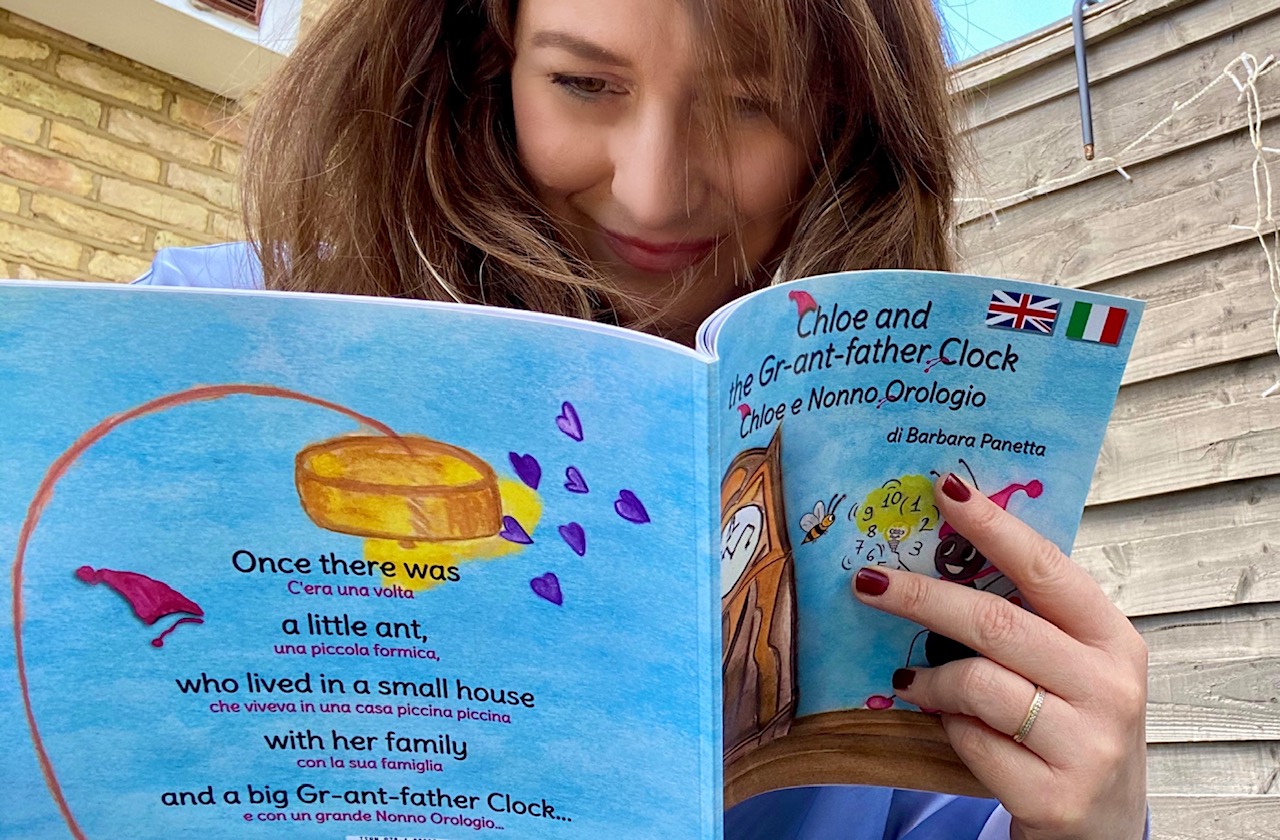 Barbara Panetta is a young Italian author, originally from Reggio Calabria, who has lived in London for years with her husband and daughters Emily and Lucy, aged 15 and 12. A few days ago, his second bilingual book (English and Italian) for children is available, which is also a video: "Chloe and the Gr-ant-father Clock" (Chloe and Grandfather Clock), the continuation of the successful "Chloe's Promise", released last year. Proceeds from sales will be donated to charity.

Barbara Panetta's fairy tale is aimed at children aged three and over and has as its protagonist the little ant Chloe, who lives with her large family (mom, dad and 10 brothers and sisters) in a small house with a large pendulum clock. One day, a strong storm makes all the numbers of the old "Grandfather Clock" fly out of the window. The whole family participates in their recovery, each putting their skills into practice.

Drawings and music, a perfect combination

The book is enriched with beautiful illustrations made by the writer herself, who preferred to use watercolor to digital processing, to keep it as simple as possible. In addition to the print version, a video book is available on Ant Chloe's YouTube channel, voiced by the actress Sally phillips (known for starring in the films "Bridget Jones's Diary" and "Notting Hill"). The music is written by Alessandro Viale, composer and pianist, and performed together with Laura Marzadori, first violin at the Scala in Milan. By reading and listening, children can have fun and learn the English language.

Barbara Panetta has cultivated a passion for writing since she was a young girl. He does this through the numerous letters he sends to his peers he met on the trips he makes with his parents. Together they travel around Europe in a camper and this gives her a great interest in different cultures. Barbara travels the world, graduates in languages ​​and achieves a master's degree in experimental linguistics (she speaks perfect English and Spanish). He goes to live first in Spain, then in Argentina (in Buenos Aires), until he moves to London. To devote himself to his daughters, he quits his job in international marketing and begins studying music with them, considering it a common language for all. Emily and Lucy play the piano and the cello respectively. They have recently finished attending the conservatory and will soon enter one of the most prestigious performing arts schools in the world: the “Guildhall School of Music & Drama”.

"Proud to be Italian"

Barbara, despite her many travels and the fact that she lives abroad, is "viscerally linked to Italy", in particular to her Calabria, and "proud to be Italian". Another passion of his is food: he loves Calabrian cuisine in particular. Before starting to write fairy tales, he published a novel in 2015 which was followed by a series of short stories. In this interview he talks about his latest work, which already promises to be a success.

Barbara, how did the idea of ​​giving voice to an ant come about?

“For several reasons. The ant is a very small insect and children are easily identified with it. As an insect he is not the most beautiful - when compared to the butterfly or the bee, for example - but he is hardworking and determined. In an age in which the canons of beauty tend more and more towards absolute perfection, it is good for children not to focus only on the exterior but that, from an early age, they also appreciate other qualities ».

Who does Chloe represent?

«The little ant Chloe is the representation of a disciplined, educated and determined child. With many initiatives and a spirit of adventure and collaboration. He has many friends and a beautiful large family ».

In the book there are several educational messages to be grasped. What is the one that is most dear to you?

«Each book has a different moral but in both the fundamental message is:“ unity is strength ”. Another message is that music is a pleasant and important discipline at the same time, which can accompany and support the child as he grows up. Little Chloe plays the piano and one of the ants plays the violin. For this reason I involved in the project two internationally renowned musicians such as the pianist Alessandro Viale, who also composed the music, and the violinist Laura Marzadori, first violin on the back of the Orchestra of the Teatro alla Scala in Milan ».

Even the revenues from this work (as happened for the previous one, ed) will be donated to charity for children in need. Which institution will they be intended for?

“The proceeds from every book sold are donated to a charity that supports children with cancer and helps their families. The association is called Momentum Children's Charity ».

You started your career with the novel "Memories in motion", 2015, followed by some short stories. When and how did the idea of ​​writing fairy tales come about?

«I am a mother of two little girls, now grown up. I have always read them many fairy tales, sometimes I invented them completely and accompanied them with drawings of my own hand. Chloe is one of them. Only after a long time did I decide to share it with children from all over the world. Fiction is a completely different approach from fairy tales. For this project, I entrusted myself to a child psychologist, who evaluated the plot and the moral ».

What are the components that attract the attention of children?

«Music, as I already explained, is a very important component. A child exposed to music from an early age learns an international language. For this reason, each book is embellished with a video book available on Ant Chloe's YouTube channel, narrated by famous English speakers. The child, therefore, to make good use of the book and learn English, can associate reading it with listening to the video. I've always loved drawing and decided to create the illustrations for these books. I chose the watercolor because it allows you to create a poorly defined and soft drawing, and I think it helps the child to develop the imagination ».

What is your favorite fairy tale?

"They are a lot. Thinking about it, one of my favorites is “The Ugly Duckling” ».

What do you miss about Calabria?

«The sun, the warmth of the people, the scent of the sea and the chili pepper, that of Diamante! I love to cook only and exclusively Calabrian dishes, therefore spicy ».

Would you like to write a story set in your land?

"Why not? I would certainly set it on via Marina di Reggio Calabria. I've already written a horror story set there… certainly a little different from a fairy tale! ». 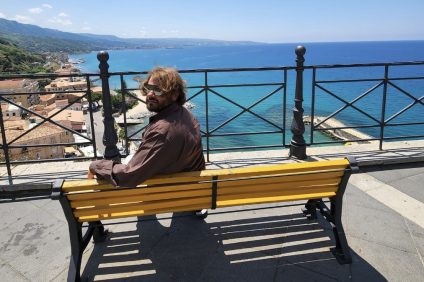 Influencer Piero Armenti in Pizzo Calabro: "The village is beautiful, visit it" 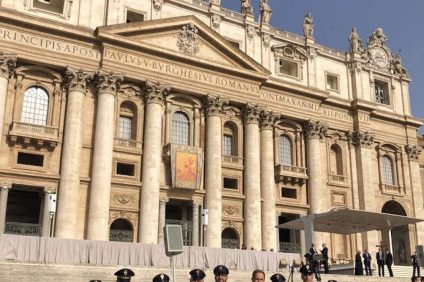 The San Michele Arcangelo Choir of the Oristano Police Headquarters 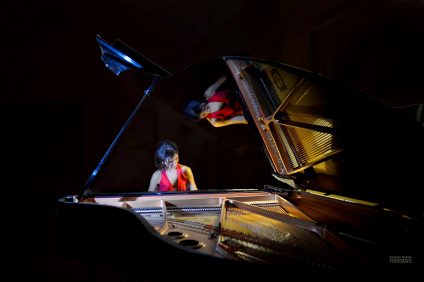 Spal, Tacopina: “2 purchases closed. We are interested in Mantia "

In the Corriere dello Sport, Joe Tacopina, president of Spal expressed himself: “We are ...