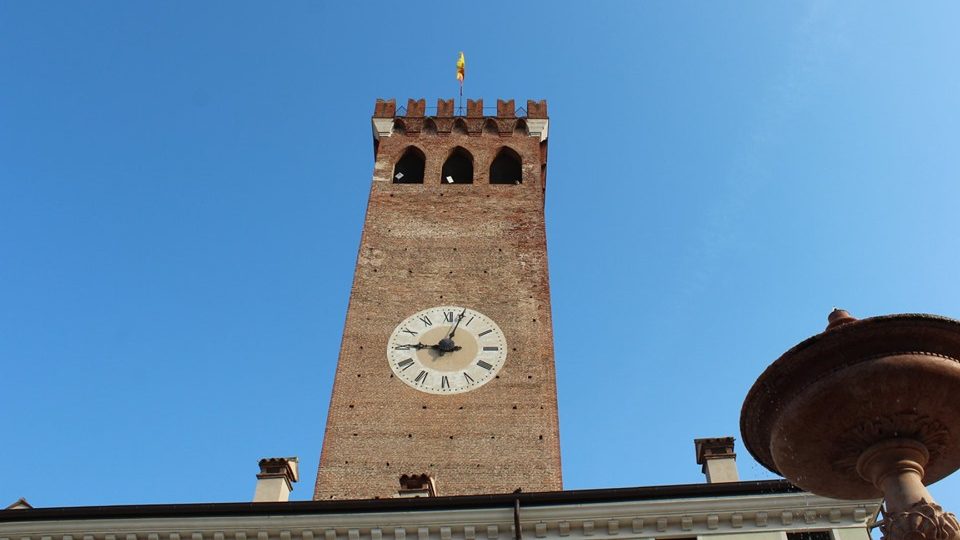 As Goethe suggested, it’s always a good idea to look at a city from above to learn about it. That’s why if you go to Bassano we suggest you climb the Civic Tower! From its top you will be able to enjoy a breathtaking view very appreciated also by the Bassanese doc!

We are not yet sure of when and why the Bassano Civic Tower was built but the documents attest to its existence already in 1349, when the first bell was placed on its top. The most likely hypothesis is that the abbey was built with the extension of the city walls in 1312.

Over the centuries the tower underwent several transformations, some of which were structural to allow the torresano (tower guardian) and his family to live inside it. Each floor of the tower (there are eight, including the panoramic terrace) offers explanatory panels, photographs and models to be observed to discover step by step some more information on the tower but also on the history of Bassano. In one of the floors it is also possible to admire the historic gear of the first watch of which the tower was equipped, even in 1799!

The view from the civic tower

After 213 steps you will finally reach the top of the Tower! This panoramic terrace was also built some centuries after the tower was built. It is in fact a project by the architect Giuseppe Gaidon built in 1823 that deprives the tower of its original roof.

Even today, the 43 meters high Civic Tower can only promise a spectacular view. In front of your eyes, the Monte Grappa massif and the nearby mountains will open up majestically, you will be able to follow the winding course of the Brenta and sharpening the view you will be able to recognize one by one the main monuments of the city, from the Church of San Francesco to the column with the sculpture of the lion . The panorama flows southward into the open plain, where you will be able to see the profiles of the Euganean Hills and the Berici Hills. A small challenge to conclude: can you also see the Alpini bridge? I guarantee you see!

With the same access times to the Civic Tower you can also access the Ezzelini walkway. Its entrance is right in the square of the Castle and runs along it creating a beautiful path in the green. The natural element moves well with the brick and stone construction of the walls and from there you can admire the view of the Monte Grappa massif. At the end of the walkway there is a view of the famous Ponte degli Alpini, one of the most famous symbols of Bassano. The ideal walk for a bit of family relaxation but also the ideal place to do some jogging!

If you want to learn more about the tower, which is intertwined with the history of the city of Bassano, we advise you to take advantage of free guided tours. They take place every first and third Sunday of the month at 3.30 pm and are free with the purchase of the entrance ticket to the tower. Follow the social media of the Tower to receive more information and … good climb!