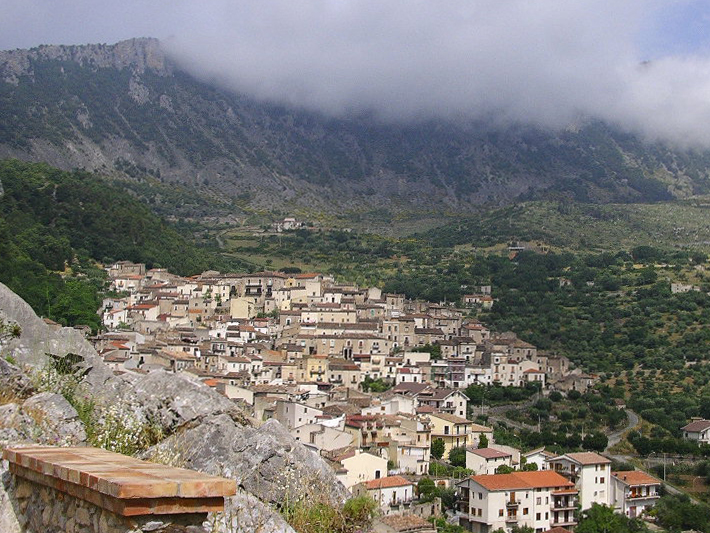 Civita is a town in the province of Cosenza, included in the circuit of the most beautiful villages in Italy. It’s a small jewel set in the green mountains that surround it. It’s part of the Albanian community of Italy, of which it preserves the ancient traditions of the Arbëreshë people.

Civita today has about 870 inhabitants. It’s a small mountain village, surrounded by the lush and rugged nature of the Pollino Natural Park. The origins of the name are uncertain. It mey have been derived from the Latin civitas but accoding to some scholars it may have Albanian origins. Hence the name may derive from qifti which means eagle. Its position among the rocks, in fact, may indicate the eagles’ nest, therefore a hidden and safe place. And from which it’s easy to see but not to be seen.

ts origins, however, go back to distant times. Thanks to the permission granted by Ferrante d’Aragona to Giorgio Castriota Scanderberg, a group of Albanian families fleeing from the Turks settled in a ruined center. The castrum Sancti Salvatoris, devastated by the earthquake of 1456 which, between 1467 and 1471 became Civita. Its origins are therefore Albanian, or rather arbëreshë and even today its inhabitants keep intact many traditions of their ancestors and speak the language of their native land fluently.

Byzantine rites and traditions in Civita

Arbëreshë is a priceless cultural heritage, which has a very strong presence in the Cosenza hinterland. Many are the centers which have origins or have been colonized by the Albanians who arrived over time. However, all of them retain traditions and language. So much so that its inhabitants are rightfully among the ethnic and linguistic minorities defended and protected by the state. It’s not the only characteristic of these territories. In fact, there’s also an oriental influence, a Byzantine one, that is very present in religious architecture, and in rituals, which are Greek Orthodox and, in the decorations.

For more than half a century in Calabria, in the Albanian villages and in Civita, Byzantine liturgical functions have been celebrated, the gestures are ancient. The chants are in Greek and Albanian, the sacred vestments are very rich and the churches are adorned with mosaics, sacred icons and the altar area has a rich inlaid wooden iconostasis. In the center of Civita there’s the parish church of Santa Maria Assunta, built in the sixteenth century.

A delightful village to discover

The architecture of the village recalls that of the medieval towns with two-level stone houses and all with a decorated chimney of different shapes. Characteristic are the so-called Kodra houses, or “talking houses“. They are buildings that have anthropomorphic features. The windows are the eyes, the door the mouth and the chimneys become the nose. They are named after the Albanian painter Ibrahim Kodra.

He was a friend of Picasso and the houses seem to re-propose his poetics and his provocative message. Interesting to visit is the “Arbëreshë Ethnic Museum”, where testimonies and traditions of the Albanian and Byzantine culture are preserved. And, the “Museum of the spinning mill”, which houses the tools for spinning natural fibers and which were powered by the water of the Raganello river. The river and its gorges dominate the valley below the town. Dizzying rock faces that reach a height of about 900 meters.

Raganello gorges and the Devil’s bridge

Its derives from the Greek ragas which means crack in the rock. The Raganello gorges are a very suggestive place from a naturalistic point of view. They are the habitat for many animal species and, until a few years ago, they were half of a tourism linked to hiking and trekking. Overlooking the gorges, the evocative Devil’s Bridge. An ancient and daring architecture. It’s said that the owner of the land asked the devil to help him build a bridge in an inaccessible place. The devil accepted only on the condition that he could have the soul of the first person who had crossed it.

And the man accepted too but, at the moment of respecting the pact, he had a sheep cross the bridge. The angry devil tried to destroy the bridge but fell tumbling into the gorges. According to the anthropologist Luigi Lombardi Satriani, the link between construction and the devil refers to folkloric themes that are found in many Italian and European traditions and which are closely connected to the great courage in creating such courageous works that defy the laws of gravity. Civita deserves to be discovered while visiting Calabria.