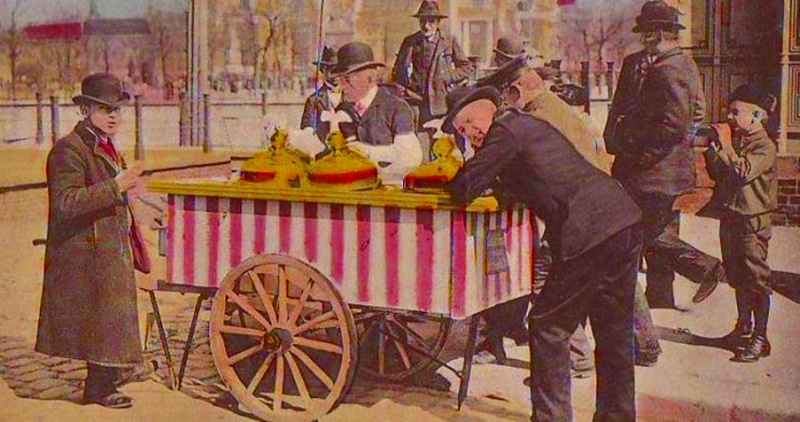 Did you know that ice cream is a delicious Italian invention?

Ice cream is Italian, and it is undoubtedly an Italian invention! The patricians tradition to bring snow from the mountains with carts, which were then kept in the cellars, the famous “snowfields”, goes back to the ancient Romans. The snow, despite the heat wave, was very well preserved in the summer, and the well-to-do classes did not give up those delicious sorbets.

It is an italian and starts from antiquity. The wealthy classes put the snow in the cups, flavoring it with fresh fruit, spices, nuts, pine nuts, or honey. Later on, sugar cane was also used.

The very consolidated Roman tradition is also found in Sardinia with the carapigna; in which snow or ice, were flavored with sheep’s milk, and always dried fruit, such as almonds and walnuts. However, it was only during the Middle Ages that the first fruit juices were frozen; however, the great leap occurred in 1686. Francesco Procopio dei Coltelli, a Sicilian chef, invented the perfect recipe to make real ice-cream!

Francesco Procopio also developed a machine for preparing it. The Sicilian chef emigrated to Paris, where he opened a café called Café Procope. At the legendary Café Procope you could taste the famous “frozen waters”, or granite; fruit ice creams and sorbets.

However, it was probably in Paris that the Italian chef added milk to the recipe as an ingredient. Its success tasted at the Café Procope, was sensational, to the point of attracting famous intellectuals of the time; Voltaire, George Sand, Balzac, Victor Hugo, Diderot, D’Alembert, De Musset, Dr. Guillotin seem to have gone mad for Italian invention.

It seems that even the emperor Napoleon Bonaparte himself, one evening he left his bicorn in the Italian ice cream shop as a pawn; his famous hat. That evening the emperor of Italian origins did not have enough money to pay for the ice cream offered to his friends! The Café Procope quickly became the most famous restaurant in the city. Francesco Procopio in a short time had taught Parisians to taste flavors like pistachio, almonds, lemons, oranges, but also chocolate and coffee.

The rise of Francesco Procopio reached its peak with an official recognition from the hands of King Louis XIV.

Procopio went to Versailles to even withdraw the concession of the exclusive on the production of “frozen waters“, or granita, of “fruit ice creams”; and “anise and cinnamon flowers”, a cake prepared with cream, eggnog and fruit!

However, according to other scholars, it seems that another Italian was its inventor. Taking a nice leap forward, we know that the first ice cream shop in New York opened thanks to the Genoese, Giovanni Bosio. Bosio seems to have actually invented the cone, or the pod in which to put the “walking ice cream”. While according to other historians, the idea of putting it between two pasta wafers was born in Milan in 1906.

Giovanni Torre di Bussana is the depositary of the innovative idea. Then we owe the Bolognese Otello Cattabriga the invention in 1927 of the first automatic ice cream maker. Innovation changed everything, making the job much easier.

Even industrial ice cream is Italian!

The era of industrial ice-cream had begun, and packaged ice creams, which had great success. However, Italian artisanal gelato, as well as sorbets, or granitas, enliven Italian beaches and beyond. In two thousand years, from the ancient Romans, from the snowfields, it made the way. But one thing is certain, the freshness, the goodness of Italian artisanal is unbeatable. Let’s think, for example, of the mulberry ice-cream that can be found in Capri, the island of love. In short, ice cream is now part of the habits of Italians!