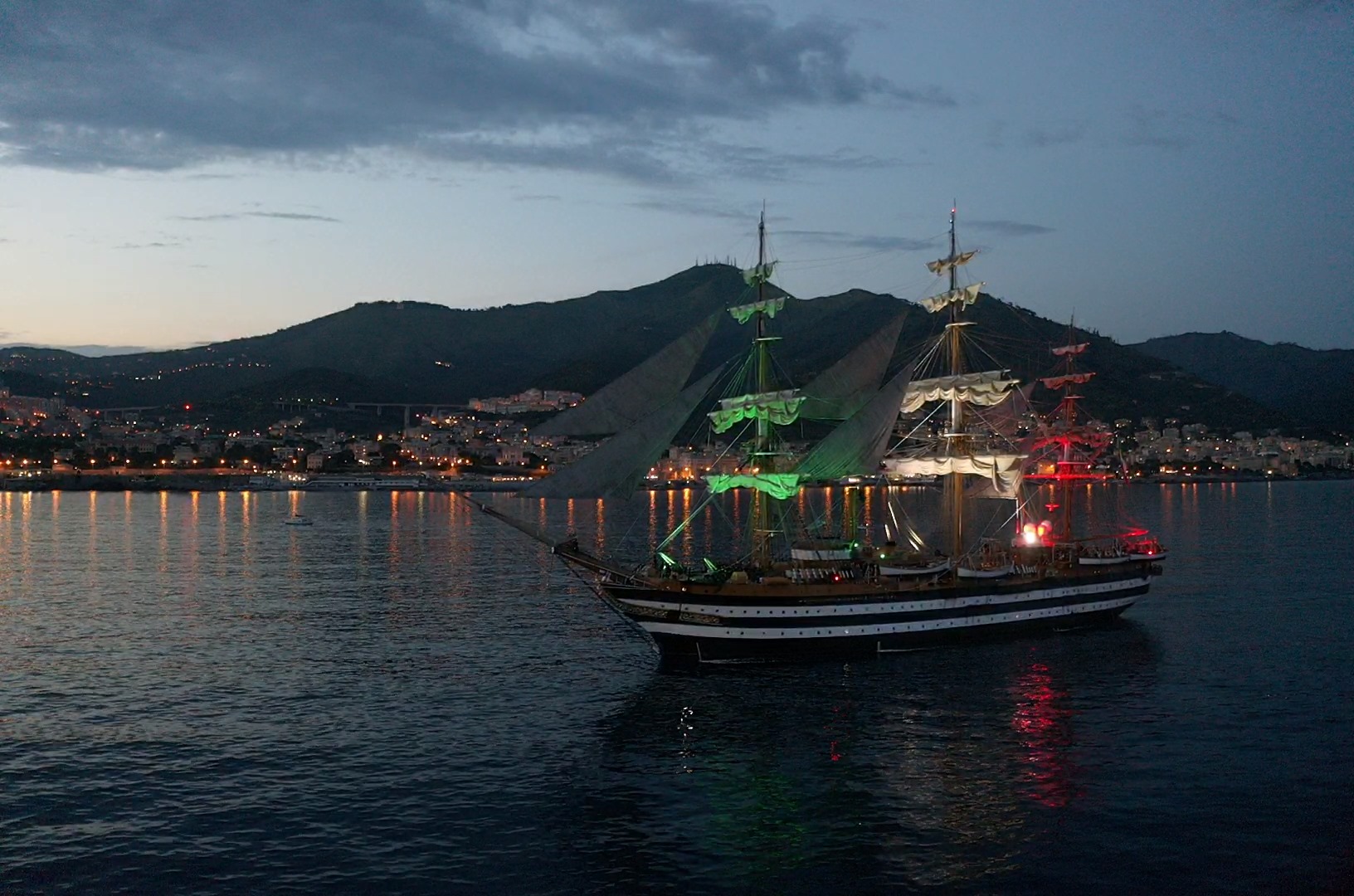 Since leaving the port of Livorno on 29 June, the Amerigo Vespucci, an imposing training ship of the Italian Navy, has been sailing the Italian seas. On board, considered the most beautiful sailing ship in the world, the 2020 education campaign is underway for the officers of the first class of the Naval Academy. Young people who are tested in sailing these days, in some of the most suggestive stretches of sea in the Mediterranean and the Tyrrhenian Sea.

From the day of its departure, and until 22 August, when the traditional education campaign ends in Taranto, the ship moors in various Italian ports, for short logistic stops. During these “breaks”, in respect of the tradition of the Navy, the 106 students (104 Italians and 2 foreigners) and the crew members, give life to the solemn ceremony of the holding of the flag. At dusk, the illumination of the sails with the tricolour follows. A real show for the eyes of those lucky enough to admire it.

The Amerigo Vespucci and the 2020 campaign dedicated to Italians

The education campaign on board Vespucci is essential for the training of official students. It is here that these young people develop the values of loyalty, discipline and sense of duty. In the formative moments they work together with the crew to become familiar with the wind, the current, the maneuver of the sails and the complexity of navigation.

These steps allow officers to learn how to deal with and overcome even the most difficult challenges that life on board a sailing ship entails. At the end of the first year of studies in the Naval Academy, they receive the “baptism of the sea”. This year, the activity of the students is dedicated to Italians who have experienced the coronavirus emergency. In order to greet the communities along the coasts, which are not allowed to approach the ship, the Navy takes every possible opportunity for close passage.

The Amerigo Vespucci this year is not accessible to the public

Due to the epidemic, the round-the-world trip that the sailing ship should have traveled was canceled. In compliance with the anti-contagion rules, for the first time in history, the ship is not open to the public during port stops. Nor can students have contact with the outside world. However, the Navy allows its virtual visit by means of a special video uploaded to its Youtube channel.

The commander of Vespucci, Gianfranco Bacchi, guides visitors directly in this unmissable web experience. The video allows you to discover many curiosities about the ship and the history of its motto “Not who begins but what perseveres”, awarded in 1978. You can also admire the sails, the bridge, the marine equipment, the board room and much more. other.

The oldest ship in the Navy, still in service

The Amerigo Vespucci, designed together with the twin Cristoforo Colombo, by the engineer Francesco Rotundi, was built in 1925. While the Cristoforo Colombo entered service in 1928 and was a training ship until 1943. At the end of the Second World War, it was sold to the Soviet Union as compensation for damages. Amerigo Vespucci, launched on February 22, 1931 in the Castellammare di Stabia shipyards, has always had the main purpose of acting as a “floating school”.

The exceptions are the 1940s (due to the wartime events), 1964, 1973 and 1997 (for extraordinary works). Another characteristic of the sailing ship is that all the commands of the maneuvers that the crew must perform, are given with the whistle, called “the boatswain”.

In recent years, Amerigo Vespucci has also been entrusted with the role of ambassador on the sea of Italian art, culture and engineering. The ship has a long history of collaboration with Unicef. Furthermore, on important occasions, it has been present in many ports of the world. We remember the 31st edition of the America’s Cup in Auckland (2002) and the 2004 Olympics in Athens.

In the 2017 education campaign, the ship represented our country and Italian products abroad. Just think of the celebrations of the 150th anniversary of the Canadian Confederation and the Tall Ship Race, the competition for tall-masted sailing ships of school ships around the world. In short, the Amerigo Vespucci is not only the most beautiful ship in the world, but, for 89 years, it is the pride of our Navy.