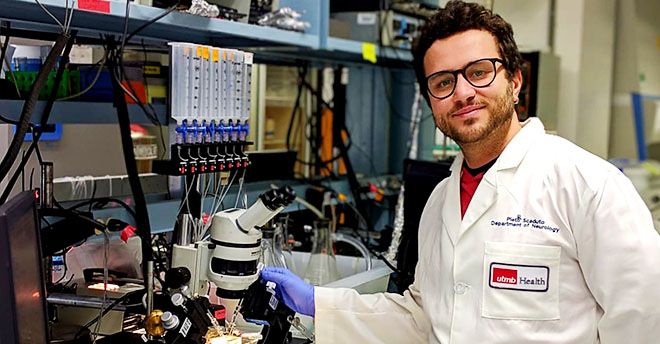 Pietro Scaduto is an Italian pride. He is 28 years old, a young biologist and is a researcher at the University of Texas. He received the “Mason Guest Scholar Program ‘cell physiology and molecular biophysics award for research on Alzheimer’s disease. An award that the University of Texas Medical Branch annually assigns to a graduate student who stands out for the results achieved in the fields of Biomedicine and Neurosciences. Another Italian abroad. Another southern excellence. Let’s find out who his research project is and what it consists of.

Pietro Scaduto: from Bagheria to Texas

Pietro was born in Bagheria, he earned a degree in Biological Sciences at the Faculty of Studies of Palermo and a post-graduate degree in Biomolecular and Cellular Sciences at the University of Ferrara. He has had work experience in Malta, Austria and Spain. He is currently pursuing a research doctorate in biomedicine and neuroscience at the University of Galveston in Texas. Here, thanks to a twinning between the Sicilian and Texan universities, he gave birth to an innovative study on Alzheimer’s disease. An interesting, unique project that won him a prestigious university award. The twinning between Sicily and the USA, moreover, is due to the figure of Francesco Cappello, professor of anatomy of the University of Medicine of Palermo and to that of Giulio Taglialatela, director of the American center of research of neurodegenerative diseases “Mitchell Center”.

The research project focuses on Alzheimer’s disease, a neurodegenerative disease of which neither the cause nor its origins is known. Pietro’s project is to extract the synapses of former Alzheimer’s patients (obviously deceased). The synapses are subsequently transplanted into frog eggs. The eggs, in this process, reactivate the synapses and give way to study them in the electrophysiological field (with the use of morphological and physiological techniques to characterize their morphofunctional differences). Despite not knowing the causes or even the origins of the disease, thanks to some studies and also to this research, it is clear that the Alzheimer’s problem is linked to the aggregation of some proteins present in the human body and to a hyper-excitability of the nervous system.

After winning his doctorate he moved to Galveston. He continued his studies and was followed by two academic tutors, by prof. Natale Belluardo and prof. Agenor Limon. Pietro was born in the beautiful Bagheria, but for almost two years he has lived in Texas. Here is good, the cost of living is in Palermo, but salaries are higher. For the researcher, Texas is a wonderful place, resembles the south and has found an open mind, typical of the people of the south. But coming home would be a dream. A small wish that could be achieved if he were offered a good position at the University of Palermo.