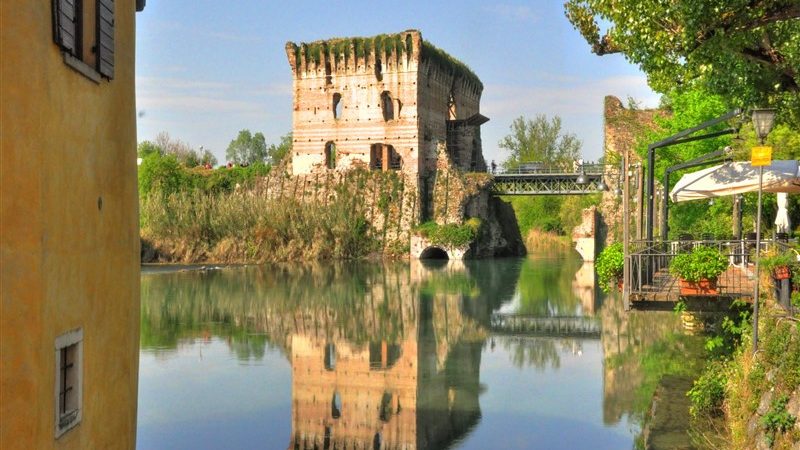 Borghetto sul Mincio: the village reflected in the water

About thirty kilometers from Verona, where the city gives way to the countryside, a small jewel is hidden which is reflected in the waters of its river: Borghetto sul Mincio.

If we really want to be precise, the correct name of the place would be simply Borghetto, a hamlet of Valeggio sul Mincio. However, toponymy is not very important. What attracts the visitor is undoubtedly its beauty that has allowed it to be counted among the most beautiful villages in Italy. The small village is a small brushstroke of an ancient world, where the history of ancient medieval knights is intertwined with the tireless arms of the millers.

Borghetto sul Mincio: the traces of an ancient past

Borghetto sul Mincio has very ancient origins. The first settlement dates back to the Lombard period. The traces of their passage are still clearly visible by observing the Curtis Regia erected around the seventh century after Christ. This fortification directly controlled the river Mincio, and it was in this structure that tolls were collected on the watercourse. After the Lombards, Borghetto sul Mincio entered the sights of many medieval families. First the Gonzaga, then the Serenissima of Venice, the Visconti and finally the Austrian and French armies. Its position was particularly strategic for the control of the Veneto area.

Even the medieval legacies are still present in the small village. Among these are undoubtedly the Ponte Visconteo and the Scaligero castle. The first was designed in the 16th century by Gian Galeazzo Visconti, Duke of Milan, and consisted of a fortified dam useful for controlling the borders of his duchy. Scaligero castle was active between the 10th and 15th centuries. From up there it was possible to keep an eye on the entire Mincio Valley. Today only a small portion of it remains, represented by the Torre Tonda and one of the surviving drawbridges.

A village of water and mills

At the end of the Venetian domination Borghetto sul Mincio lost its military functions and was converted to agriculture. A mill after another began to rise, and the life of the small village seemed to enter deeply into symbiosis with the river Mincio. Indeed the mills represented the main livelihood activity of the village. Today their shovels have stopped spinning, and have turned into bed and breakfasts and craft shops. However, this does not break the magical atmosphere that hovers around Borghetto sul Mincio. The few remaining houses that are still reflected in the river continue to offer suggestive views.

Borghetto sul Mincio is an unmissable destination for all those tourists who visit the areas around Lake Garda for the first time. To fully enjoy the charm of this timeless destination it is advisable to take a walk along the river at evening until you reach the wooden bridge. From here the red of the sunset will descend to the valley to then mix with the waters of the river, and finally enchant the visitor’s eyes. Although you need little time to visit Borghetto sul Mincio, let yourself be carried away by this enchanted place. The gurgling of the water will be a constant background. So let yourself be carried away by the current in the beauty of this timeless place.