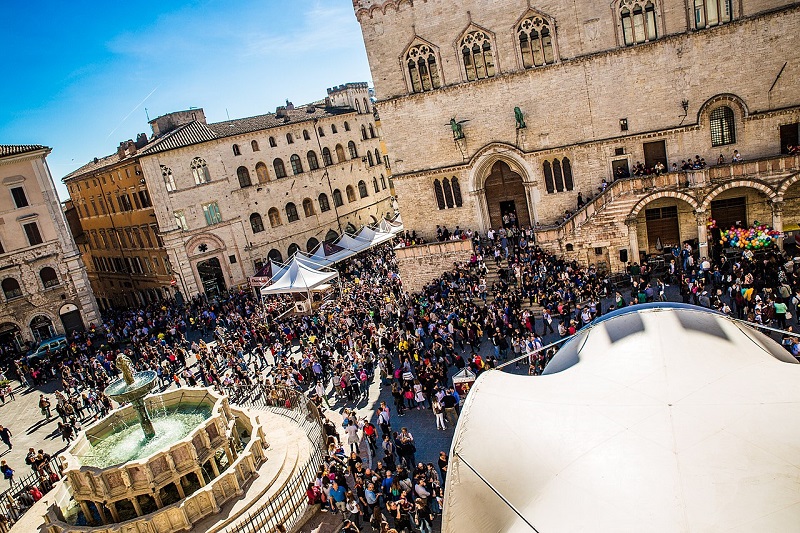 Anyone who loves chocolate in all its forms cannot miss this appointment. Starting from October 18th in Perugia, considered the real homeland of chocolate in Italy, Eurochocolate. The event dedicated to chocolate has reached its twenty-sixth edition this year.

An exhibition that involves the whole population and that sees thousands of visitors arriving in Umbria. Not only chocolate lovers, but also experts in the field. It will be a week full of initiatives, to learn about the news of the chocolate world and above all to have fun. All this until October 27th when the curtain will come down on this edition.

The project designed by Eugenio Guarducci became a reality in 1994. Over the years there have been many developments, but it remains the most significant appointment to bring together the cocoa-producing countries, which present their cocoa-based uses, customs, traditions and products. The international summit, which takes place every year, will feature cocoa tastings and recreational-educational activities. In the scenario of the Loggia dei Lanari, in Matteotti Square, there will be comparisons between producers from Bolivia, Brazil, Colombia, Honduras, Mexico, Panama and Venezuela.

And the symbol of this year’s edition is a curious object. #attaccabottone is in fact the claim with which the International Chocolate Festival celebrates the event. And so that during the festival Matteotti Square will turn into a “buttons square”. This will be done in collaboration with Icam Ciocopasticceria, FBM, Cabrellon and Pavoni. It will be a sort of laboratory where visitors are allowed to make many sweet chocolate buttons with the silicone mold and then take them home. And there will also be a chocolate-themed “haberdashery” featuring the new products of the #attaccabottone line by Costruttori di Dolcezze. And so chocolate-based desserts, will be prepared which will be displayed on the stands. But also chocolate sculptures, as usual.

Buttons in many and tasty shapes

So curious the symbol of this edition. There will be colored, marbled, milk, gianduja, white chocolate and fondant buttons, arranged in imitation leather packaging and transparent glass, Plexiglas and PVC containers. Space also for the “Chocolate show”, the largest chocolate emporium. Over 6 thousand references are expected for products offered by over one hundred confectionery, artisan and industrial, national and international brands.

Chocolate exhibitions and activities for children

And there is no self-respecting event without exhibitions. The former Chiesa della Misericordia will host two exhibitions. “Buttons” is the exhibition created in collaboration with the Santarcangelo di Romagna Button Museum. And “Bottonarte” which will propose an original creative path in which the buttons transform from a common everyday accessory into an artistic object. In the same space there will be a button-shaped table, ready to welcome thematic games for children and their families. The little ones can also make some chocolate-based desserts.

The brands that accompany this edition

There are many industry partners participating in the event. Everyone will have a special space dedicated to their new products and also to traditional productions. From Callebaut, Pan di Stelle, Icam, Lindt Italia, Caffarel, Pernigotti, Eraclea, Perugina®. The side initiatives will be in addition to exhibitions, show cooking and guided tastings, book presentations and activities reserved for schools.

As explained by the organization, in the press release during the presentation, for those who reach Perugia there will be a special service card. It will entitle to special gifts and discounts during the event, such as the purchase of products at the Chocolate Show stands, discounts at hotels, restaurants, shops, museums and other affiliated facilities. Among the gadgets, the original 100-gram tablet “Born with the shirt” signed Costruttori di Dolcezze. Appointment then in Perugia for a week full of taste and flavors.