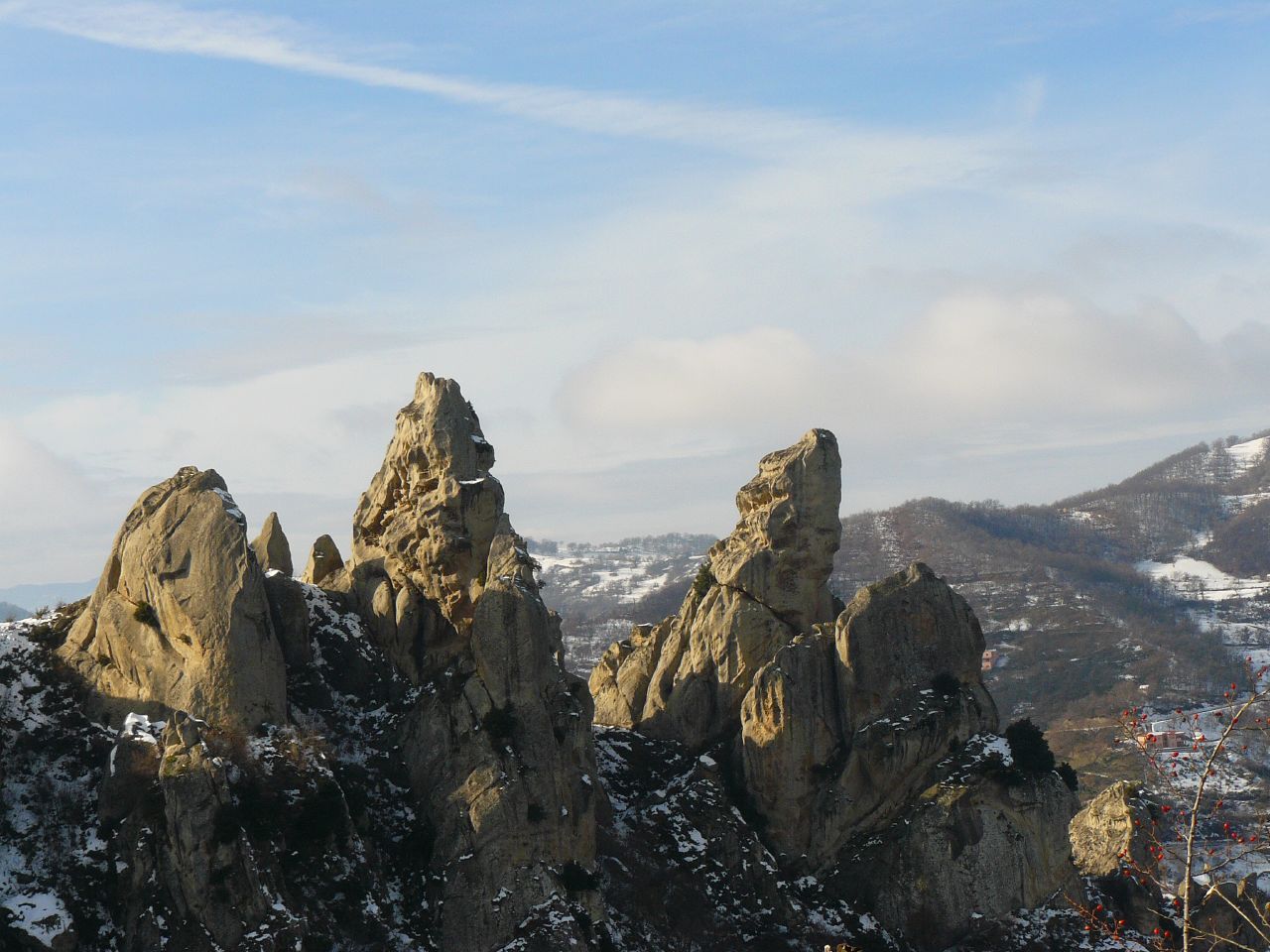 Man has proven he can be a very skilled craftsman. So it was for the masters of all those mother arts of important masterpieces. But it is not only the human being, with his know-how, that has succeeded in these results. First and foremost Nature, which by chance has created real works of art during an “indefinite” temporal quantity. Basilicata is undoubtedly one of the places of this spontaneous production. With its “Little Lucanian Dolomites”, rich in figurative allusions, it is fully included among the scenarios worthy of admiration.

To fully appreciate something sometimes it is necessary to “arm yourself” with a deep look. Observe from different perspectives, pay attention to details and stimulate the imagination. This is the spirit with which you can taste the Lucanian Dolomites. Imposing and vain they are there, still, waiting to be looked at. “Aware” of a beauty whose forms are the result of a great deal of work. Fifteen million years ago rocks that still constitute them from the sea were born. Slowly sculpted and shaped by a Carthusian craftsman and endowed with patience. Some look like spiers, giving us the idea that they are taller than they are. Others indulge in animal figures, faces and inanimate objects. And it here is where the deepest eye of the most imaginative observer is activated.

Sometimes you will see clouds in the sky in the shape of a dog’s head, dragons and much more. This attitude in seeing “what is not there” is called pareidolia, an instinctive phenomenon that when it occurs, leaves us pleasantly surprised! If you want to train in this “discipline” the Little Lucanian Dolomites will certainly be a good gym! Here you can see the golden eagle, the anvil, the owl and many other allusions. Nicknames born from the unusual shapes drawn in the profile of the rock. The singular names of the pinnacles are joined by the more generic one of the “Little Dolomites”. Originally baptized Costa di San Martino, they are however better known by the name that associates them with the Trentines.

A good point of observation are the villages that overlook this creative landscape. Near the Little Lucanian Dolomites there are the towns of Castelmezzano and Pietrapertosa. Placed on the frontal peaks, they could symbolically interpret the part of those who curiously “spy” their neighbors. And here a window through which to admire the imposing peaks is opened. Inserted among the most beautiful villages in Italy, from these two places paths that lead up to the Lucanian Dolomites start.

What to observe “from within”? Fauna and vegetation. Different animal species live in the most hidden and apparently less hospitable corners. The red kite, the peregrine falcon and the kestrel. Specimens with a great view! Even the flora finds here and there places to dwell. This may seems something great compared to the life force of a nature that makes space between the rocks! Among the best-known plants the red valerian stands out. However, another point of view is lacking. The one that widens the field of observation and allows us to contextualize.

Going beyond the main subject you will notice that, as a backdrop, there is a sinuous landscape. Gentle slopes that contrast and break the harsh tones of the spiers. More details are given by the Rio di Caperrino. A stream that has carved a deep furrow to divide the highest peaks of Castelmezzano, the so-called “Murge” from the Little Dolomites. But if all this is not enough and you are looking for a strong emotion, then it is time to try “the angel’s flight“! Suspended by a steel cable, it travels for a kilometer and a half between Castelmezzano and Pietrapertosa to a thousand kilometers of height. An alternative point of view that completes the previous observations giving dynamism and thrill.