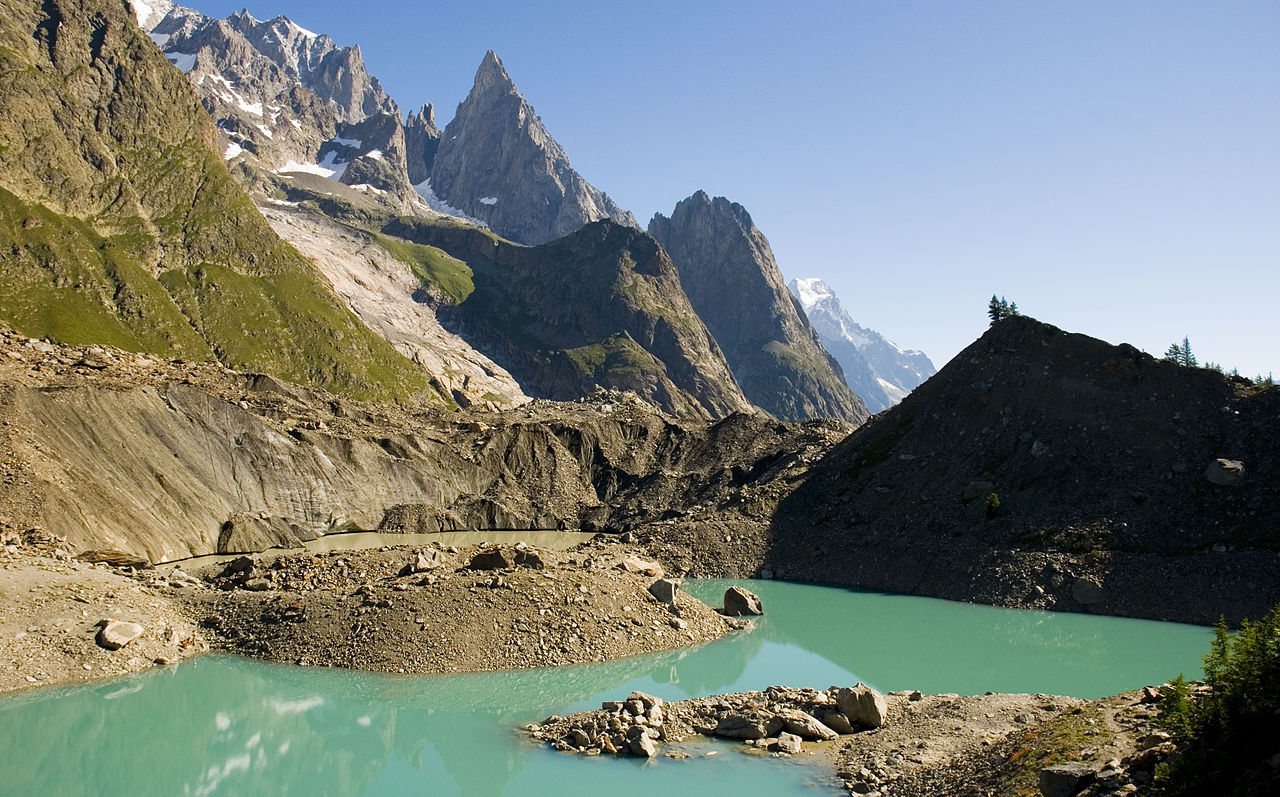 A suggestive stretch of water lies at the foot of the homonymous glacier. Able to amaze us with its shades of color. But also take us by surprise when, visiting it at different times of the year, we find it “empty”. The Miage Lake spends its life at 2000 meters above sea level. Ready to welcome, in its silent action, tourists who liven up the quiet Valdostan paths.

The uniqueness of this natural protagonist has been the subject of numerous observations. As recently as in the past. Man has captured the peculiar “behaviors” over time. The small basin is located at the foot of Mont Blanc. Son of the Val Veny glacier inevitably suffers the consequences. And so the Miage lake becomes the stage for a spectacular act. The one who sees the same glacier as the first actor. Manufacturer of icebergs where it comes into contact with water. Here then the exhibition of the glacial blocks begins. As spring arrives, the Miage Lake comes to life. Frosty fragments sail by attracting the eyes of visitors.

But that is not all. Something else has aroused human interest. Looking at the place at different times of the year the scenario changes. Moving from a basin full of water to an almost empty one. A phenomenon that prompted the observations of various intellectuals of the past. From scholars of the subject to painters. It appears that at the end of the 1800s these changes were the subject of artistic representation. At the head of all this there would be just the glacier which also constitutes half of the lake’s pavement. We are therefore faced with a partly epiglacial basin, partly in contact with the cliff.

The best season to visit the Miage Lake varies according to what you want to observe. Perhaps the ideal would be to make excursions at different times of the year. So as to have a complete picture of the changes affecting the basin. But let’s see how to proceed to reach the area. Already established routes recommend leaving the car in the La Visaille car park. From this moment on, continue on foot, along paved roads and nature trails. From the beginning it is possible to opt for a double solution. A road route, easy also because it is closed to traffic. Or a shortcut to take the turn of the first bend.

In this second case you will find yourself crossing the coniferous forest whose needles are the carpet of the walkway. A few minutes later you will come out again on the road at the sides of which are larches and some broadleaf trees. At this point you can start enjoying the landscape around you. The steep and rocky Morena del Miage on which moves the frozen river that originates from the Mont Blanc. A stream that goes from more than 4000 meters to the 1800s of La Visaille. And it is here that the rocks begin to feed the stream of the Miage.

Continuing it is possible to observe in the distance the Pyramides Calcaires. Limestone formations in the form of a pyramid clearly visible from Lake Combal. We proceed by ignoring the bridge and keeping the right. Soon you find yourself at a crossroads. We choose the indication “Val Combal” where a break at the homonymous bar will be possible. From this point the ascent to the Miage lake begins. Only fifteen minutes and here the goal is reached. A path that becomes an opportunity to discover the territory. But also a way to observe the landscape from a philosophizing perspective. The colors, the silence, the voice and the slow rhythm of nature.