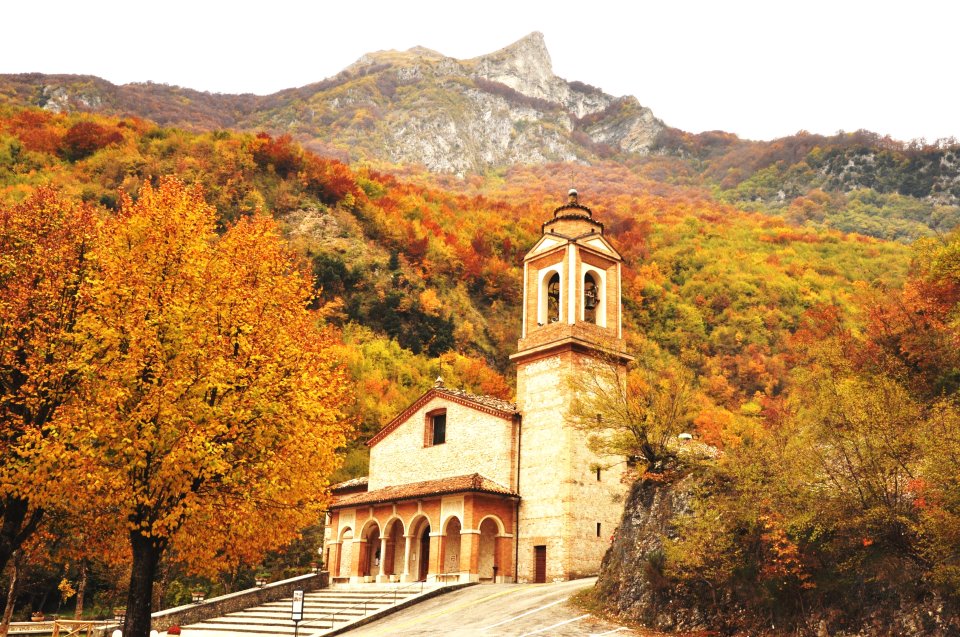 Montefortino: Sanctuary of the Madonna of Ambro

Surrounded by dense vegetation and at a height of over 600 meters above sea level stands the sanctuary of the Madonna of Ambro. We are in Montefortino, a small village on the slopes of the Sibillini mountains in the Marche region. Dedicated to the Madonna of Ambro, it takes its name from the homonymous stream.The Sanctuary preserves inside it delightful frescoes and paintings, twelve those that represent the Sibyls.

The Sanctuary of the Madonna and the earthquake of 2016

Unfortunately the recent history of the beautiful and characteristic church suffered a blow when one of the strong earthquakes that struck central Italy in 2016 literally breached its walls, was declared uninhabitable and consequently closed to the public.

Thanks to the constancy of the inhabitants of the nearby villages and the tenacity of the municipality of Montefortino, after just two years after the ruinous earthquake it was reopened. The faithful were thus able to celebrate the Holy Mass on the night of December 24th, 2018.

Given the peculiarity of the event and the notoriety of the Sanctuary, the news had national resonance, it also dedicated a few minutes to the RAI newscast. The little Lourdes, the faithful call it this way because of the many coincidences. The vicissitudes that unite the sanctuary and the far more famous church of the Alps, are really impressive.

As it happened for the French “cousin”, also the very Italian Church of the Madonna of the Ambro was built to celebrate the apparition of Maria. It was the eleventh century when Our Lady appeared to a young dumb shepherdess. Both buildings are located in the Apennines, and both churches are very close to a river. The church today more than ever a symbol of the rebirth of places brought to its knees by numerous earthquakes, is the destination of many pilgrims.

A beautiful mountain range between Umbria and Marche. As many as four municipalities compete for the territory, which offers one of the best preserved and protected wooded areas in all of Italy. Thanks to the Monti Sibillini National Park, the area is well guarded and the beautiful gorges of the valley floor are still intact today. The various rivers and streams that mark its face are buried, creating breathtaking caves and gorges. One above all the Gorge of the Infernaccio, a must see.

The only Italian region with a plural name. Beautiful, indeed wonderful. The Marche hills, which dress in bright colors, ranging from yellow to orange, during the flowering period of sunflowers and poppies manage to snatch a smile from anyone. The beauty of the region is not the only reason for its fame.

Marche in fact seem to have been blessed with a sort of magic. Some of the most famous among Italian painters and writers and personalities have been born in the beautiful region of central Italy. We are talking about characters of the caliber of Raffaello Sanzio, Giacomo Leopardi, Maria Montessori and Gioachino Rossini.

(Picture from Facebook Sanctuary of the Madonna of Ambro/ Montefortino)