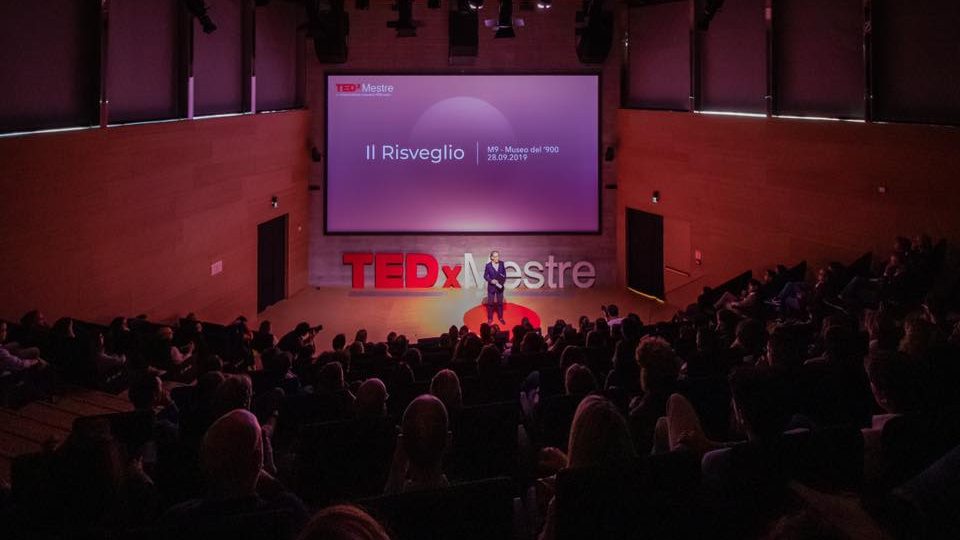 TEDx Mestre proposes an awakening of minds and consciences

The very first TEDx edition of the city of Mestre took place on Saturday 28 September. On the theme chosen, that of awakening, the public was able to learn interesting ideas and make new experiences thanks to the many activities proposed.

TEDx: ideas in a circle

The American TEDx model is now widespread all over the world. In fact, every day somewhere in our planet, one of these conferences is taking place. The motto is “ideas that deserve to be disseminated” and the organization, as well as the appearance of the day, is highly recognizable. For example, the red writing of TEDx and the white writing of the city, the red button on which the speakers alternate, 18 minutes each.

Speakers are always new (it is not possible to participate in more than one TEDx), they must adhere to the theme chosen by the organizers but telling their experience or expertise. Dealing with politics and religion is prohibited. Organizers and speakers lend their hard work totally free of charge. Here in Mestre the event was staged at the M9 Museum, in the auditorium and in its external courtyard, and involved about 800 people during the day. Soon on the YouTube channel you will find all the videos of the speeches, as per the established TEDx tradition, waiting for the 2020 edition.

The day at TEDx Mestre

Twelve side events including workshops, tastings, round tables and activities for children, saw numerous inscriptions and an enthusiastic audience, including architecture, hiking, yoga and writing. TEDx conference, on the other hand, began at 3 pm. The rich welcome kit offered to guests shows the quantity of collaborations and creative energy that has created such an innovative event. The auditorium filled up quickly and the master of ceremonies, storyteller Andrea Bettini, immediately started the conference explaining the theme. Awakening is that phase between inertia and activity that, as in the organizers’ intentions, coincides with an awareness raising. Even the contemporary dance of Venezia Balletto and Funkasin‘s revisited music in a modern key offered the public their own interpretation of awakening.

With the closing of the works at 7.30 pm the final aperitif was opened, offered by technical sponsors. A convivial moment to intercept the speakers and be able to interact with them.

From architecture to psychology, through drones

Filippo Ongaro, health and performance coach and former ESA doctor, opened the dances for the nine speeches of the day; with him we discussed how our choices determine successes and unhappiness. Following the architect Alessandro Melis described some visionary architectures of the cities of the future imagined by his students of the University of Portsmouth. The third speaker was also the youngest: the nineteen year old woman from Turin, Alessia Russo, told how the drones her American company deals with will be increasingly used in our daily lives. The professor of the Ca’ Foscari University of Venice and psychologist Ivana Padoan spoke about the epistemology of complexity and the difference between feeling and understanding; in closing with Giuseppe Riva, the uses of transformative technology for individual and social wellbeing were examined.

After the coffee break we came back to life with the school imagined by Lorenzo Busi of Big Rock (a computer graphics school), where we also teach virtual reality for kids who love to watch and learn more through videos . Following the story of the entrepreneur Serenella Antoniazzi and her mantra “I must not fail”, which also led to the establishment of a state fund to protect companies destroyed by their creditors. The last two speakers instead took us into the mountain world. Gianluca D’Inca Levis, creator of Dolomiti Contemporanee, told of abandoned mountain places and their revival projects through art and research. Finally, Andrea Bianchi explained the benefits of walking barefoot and how feet, always forced inside our shoes, deserve a real awakening.