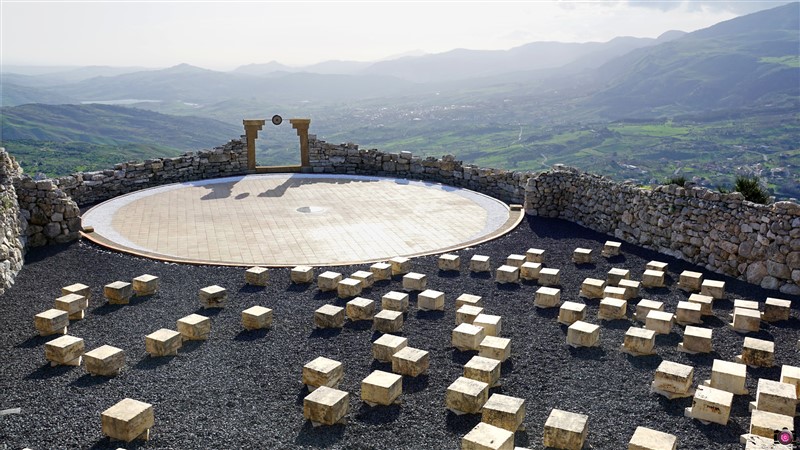 The Andromeda theater: a stage between the stars and the sea

In the darkest and most hidden recesses of our peninsula there are stories able to shine with a light of their own, like that of the evocative Andromeda theater. Born from the idea of a visionary shepherd named Lorenzo Reina, the theater rises on the heights of Santo Stefano Quisquina, a small village in the province of Agrigento. From here the spectator can do nothing but enjoy a breathtaking view, where the Sicani mountains run until they flatten themselves in the sea in front of the island of Pantelleria.

The Andromeda theater is a pearl of beauty. On the theater there remains a mythological halo handed down from the Greek culture that colonized the island. Like the beautiful and timid Andromeda, daughter of the superb Cassiopea, even the theater hides its magnificence in the eyes of many. It is necessary to climb a steep climb to reach it, but what you will find up there will reward your every effort.

Andromeda theater in the dreamy eyes of a shepherd

Lorenzo Reina has a great dowry. That of teaching something through simplicity, a characteristic that has marked all its existence. Born in 1960. He is the son of a Sicilian shepherd, and in the wake of the family tradition, since he was a child he dedicated himself to sheep farming.
Just to carry on his father’s activity, he is forced to give up his studies soon. Curiosity, however, is not just behind school desks. Thus the young Lorenzo began to steal his sister’s books to satisfy his hunger for culture.

In spite of everything, the desire to know does not just slip into the pages of a book, but the fantasy that those words light up, seeks a practical application in reality. Thus, always self-taught, the dreamy shepherd began to work first with wood, and then with stone. On the heights of Località Rocca, a hamlet of Santo Stefano Quisquina, it led to grazing its flock in the 1970s. As pervaded by a feeling of ecstasy, he remained up there until dusk, as if he wanted to enjoy the spectacle of the sunset. Lorenzo was convinced that there was something magical about it, and he imagined turning his sheep into stones that would shape his theater one after the other.

The Andromeda theater is made up of as many as 108 stones that are arranged around the central stage. Looking at it from above, it is possible to see how the installation by Lorenzo Reina faithfully reproduces the constellation of Andromeda.

A boundary wall revolves around all the space to open onto a portal, within which the setting sun will set. The summer solstice seen from the Andromeda Theater is a unique and unforgettable show. Spectators silently watch the horizon waiting for the sun to fall on the longest day of the year. What is created is a magical atmosphere. Everything seems to be suspended, and the long-awaited night will bring the stars of the Andromeda Theater to merge with those of the sky. However, its visitors were not only aware of the uniqueness of the theater: last year the project was also the protagonist of the Venice Biennale. Thus the dreams of a shepherd from the province of Agrigento conquered reality.