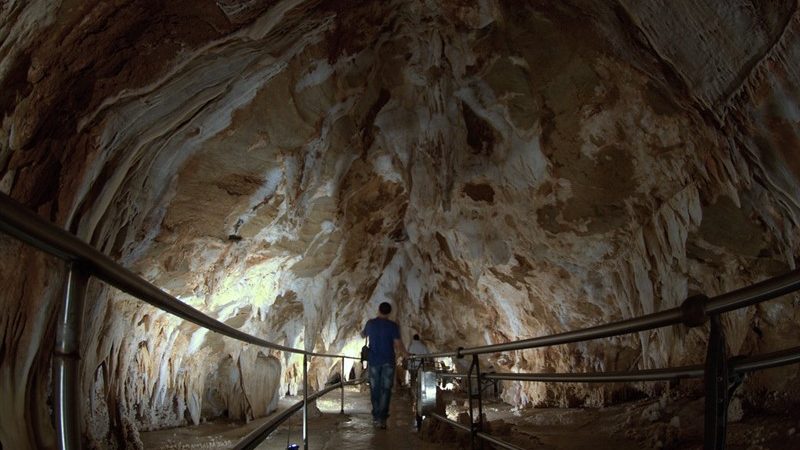 The caves of Toirano: discovering the depths of Liguria

Raise your hand if you have never heard of the Caves of Toirano. The homonymous village in the Ligurian hinterland is up there in the middle of the Varatella mountains in the province of Savona. Many would consider it a common agglomeration of houses, if inside it did not preserve the signs of even “prehistoric” past.

In fact, in the depths of the tunnels of the Toirano caves there is a trace of millenary populations. According to research by experts, some finds are referable to Neanderthals. Thus the visitor can immerse himself in stories that intertwine over the course of the centuries. As if this were not enough, he will be amazed by that fine architect called “nature” able to leave everyone stunned with the marvelous limestone composition that dominates the cavities.

The rooms of the Toirano caves: Bàsura, Colombo and Santa Lucia

The caves of Toirano rise on a promontory overlooking the Ligurian coast. To be precise, behind the seaside resorts of Ceriale, Borghetto Santo Spirito and Loano. It has always been a place of interest for the studies of speleologists, the different areas of the caves came to light at different times in history. The most “new” room is the Grotta di Bàsura discovered around the 1960s. According to studies and various surveys, he found refuge here for millennia, the now extinct “bear of the caves“. The exemplary brown loved to spend his hibernation period in the caves of Toirano. At the end of the 19th century the first excavations were carried out which led to the discovery of the Columbus cave. Located a little higher than that of Bàsura, the cave contains important rock traces of groups of hunter-gatherers dating back to the Paleolithic period.

Here footprints, hands, knees and even the so-called “room of mysteries” were found. In this place, the presence of numerous balls of clay attached to the walls suggests some ritual ceremonies typical of the era. Santa Lucia Cave is divided into a lower and a higher area. The first is undoubtedly the most evocative one to visit. The walls are covered with thin aragonite crystal formations. Many of the crystals present are arranged in curious “flower” formations. In some areas then, mammoth stalactites fill the surrounding space. In the cave of Santa Lucia Superiore you can see the remains of a medieval sanctuary dating back to the 15th and 16th centuries. Behind the altar there is a corridor of about 240 meters with numerous inscriptions on the walls. The faithful who went on pilgrimage to the sanctuary left such signs as a trace of their passage.

To discover the beauties of the Toirano caves it is possible to book one of the many guided tours carried out daily. First of all it is necessary to equip oneself with shoes suitable for the steep ground of the caves, and to have at least one sweatshirt (the temperature inside is 16 degrees). The route will start from the Bàsura cave and then go up towards the Columbus cave.

From here an artificial tunnel will lead us to the lower cave of Saint Lucia. The tour will end coming from the exit located in the cave of Santa Lucia Superiore. The Toirano caves are an unmissable journey to the rediscovery of lost populations and the wonders of nature in the depths of the subsoil. In short, an unmissable event for tourists on the western Ligurian Riviera!