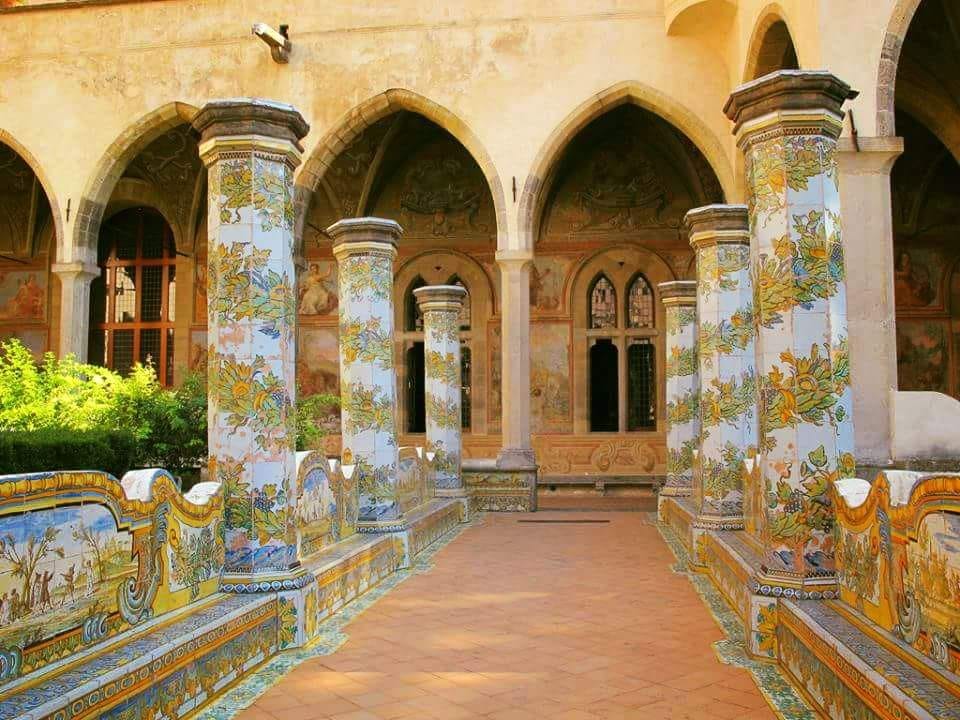 The Monastery of Santa Chiara, art and ancient history in the heart of Naples

The Monastery of Santa Chiara of Naples was born as a court chapel, a place dedicated to religious and civil manifestations during the Angevin domination. King Robert d’Anjou wanted to build the important building with his second wife, Queen Sancia of Majorca. In fact, the two sovereigns wanted a court chapel worthy of their rank to dedicate to the Blessed Sacrament. In addition to the chapel, a Franciscan convent was designed to accommodate the friars who took care of the liturgical functions and a monastery for the order of enclosure of the Poor Clares. The monumental complex composed of church, monastery, cloister and bell tower, took the name of Santa Chiara from the presence of the cloistered nuns.

The construction of the monumental complex began in 1310 and was completed in 1328. The church, built by Gagliardo Primario, has a single nave with ten chapels on each side. The rulers of the Angevin house and the most important court dignitaries are buried in the sacred building. The sepulcher of King Robert made by the Florentine artists Giovanni and Pacio Bertini, authors of the high altar and the pulpit is impressive.

Later the Bourbons were also buried within the walls of the sacred building. There is little evidence of the extraordinary frescoes by Giotto and the apprentices who are part of his Neapolitan workshop. For over four centuries the complex of Santa Chiara remains unchanged as the Angevins had conceived it. In 1742 Ferdinando Sanfelice and Domenico Vaccaro started working on it together with a group of decorators and architects. The medieval construction is enriched by Baroque embellishments. In 1943 the bombings of the Second World War destroyed the church which, at present, has recovered its original medieval appearance.

The cloister di Santa Chiara is an oasis of peace and tranquility in the heart of Naples. Of the original building remained the colonnade with 66 arches. The garden, as it appears today, was built by the abbess Ippolita Carmignano and was designed by Domenico Vaccaro.

The green area has four large flowerbeds, subdivided in turn by internal paths with 64 pillars embellished with hand-painted majolica. The majolica decoration is the work of the artisans Donato and Massa. These are polychrome majolica tiles that blend well with the surrounding nature. Part of the garden is Italian, with hedges and fountains; another area is dedicated to cultivation.

The Santa Chiara Museum has four exhibition halls: the Archaeological Hall with the finds found during the excavations; the Sala della Storia where all the artistic changes experienced by the monumental complex are explained; the Sala dei Marmi and the Sala dei Reliquiari where prized sacred urns are exhibited.

The Museum, opened in 1995, exhibits many finds from the various constructions of the whole monumental complex. Among the many works the fourteenth-century Fregio di Santa Caterina by the Bertini brothers and the Ecce Homo by Giovanni da Nola, one of the most renowned sculptors of the Neapolitan sixteenth century.

The archaeological area and the crib of the eighteenth century

The monumental complex also has an archaeological area with a thermal area dating back to the 1st century AD C. discovered in the post-war period. Inside the monastery there is also one of the cribs made in Naples during the reign of Ferdinand IV of Bourbon.

In respect of the Neapolitan crib tradition, the sacred representation is ‘ideally embraced’ by the life of the districts of ancient Naples. The Nativity is placed at the center of the scene and is placed in a ruined Roman monument. An emblematic image that signifies the birth of the new Christian era on the ruins of paganism. The installation is made of papier-mâché, cork and wood; the shepherds are made of spun iron, tow and terracotta.

Munasterio ‘e Santa Chiara is the title of the famous song dedicated to the suggestive and ancient Neapolitan complex. The piece was launched in 1945 by Giacomo Rondinella and, over the years, was taken up with great success by many other artists such as Roberto Murolo, Claudio Villa, Peppino Di Capri and the same Mina. The protagonist of the song is an emigrant who expresses with a heartfelt tone the desire to return to his Naples, fearing to find it in the rubble after the terrible war conflict. The monastery of Santa Chiara, destroyed by bombs, also thanks to this poignant melody becomes the symbol of a whole nation that wants to rise again after having experienced the horror of war.