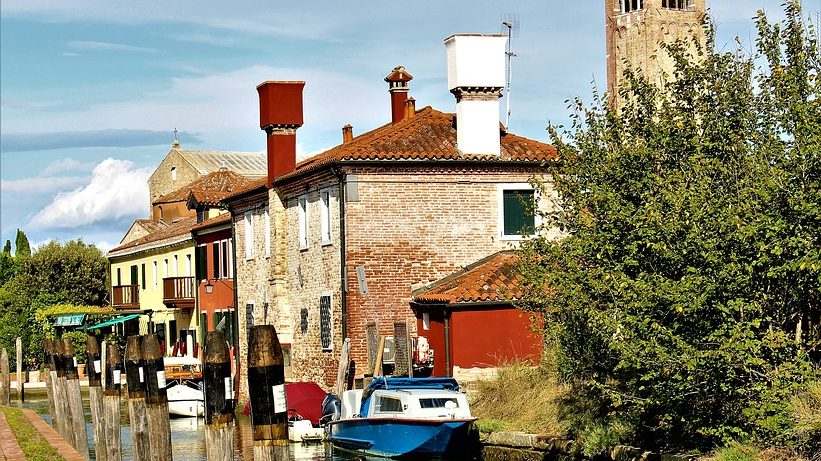 Torcello: the island that anticipates the myth of Venice

Torcello is one of the largest islands in the Venice lagoon but it is probably the least known of them. However, its history is even older than the island of Venice: its tranquility and its landscape take us to a peaceful and atypical dimension compared to what we are used to know about the lagoon.

As many inhabitants as the fingers of two hands

Leaving aside the summer, a period of greater meteorological stability and greater tourism, in the autumn-winter period Torcello has little more than ten inhabitants (13 in 2018). Very few people thus become custodians of the great beauty and history of which the island is rich. Gulls and herons are very numerous and love to fly over the lagoon and on the bare ground.

Far from the incessant swarming of Venice and just a vaporetto stop after Burano, Torcello looks like a wild island. The view is therefore completely different from the orderly architecture of Venice, almost entirely covered with Istrian stone and gray pavement. In the famous Cipriani inn, often also called “red house”, lived the American writer Ernest Hemingway around 1949.

Some historical evidences and ancient documents include the first inhabitants of Torcello already at the beginning of the Roman imperial era. The Latin poet Martial testifies to the existence of some country villas and fishermen’s houses in this small archipelago. However, the first real occupation of Torcello occurs after 639 AD, the period of the Lombard invasion of the Veneto territories.
It was the citizens of Altino who found refuge there, fleeing from the barbarians, and who gave it its current name (Turricellum) that derived from the altinate door where they lived. Not by chance, this is also the origin of the denominations of other islands of the lagoon such as Burano, Murano and Mazzorbo.

In the following centuries the island became an important religious center, an episcopate dependent on the Byzantine Empire. Trade also began to flourish, so much so that Torcello was considered an “empòrion mèga” by the Byzantines, or an important commercial hub. In the meantime, however, the group of Venetian islands began its ascent and, also due to the gradual swamping of the Torcello lagoon and the development of malaria, ended up completely stealing the scene, throwing it into decline already in the fifteenth century.

Torcello between architectures and legends

The Middle Ages was therefore its period of maximum splendor. It came to count 20,000 inhabitants employed in fishing, trade, wool processing and monastic centers. The most important was the Benedictine one of San Giovanni Evangelista which over the centuries welcomed offspring of the great Venetian patrician families.

The monastery included a church that emerged from the 1960 Polish excavations: it is one of the nine churches on the island. The most famous are Santa Maria Assunta and Santa Fosca, which are located in the main square. They absolutely deserve a visit as extraordinary examples of Venetian-Byzantine architecture. Some curiosities: the Devil’s Bridge, whose name bears witness to numerous legends in this regard, is a bridge with no railings as in Venice nowadays very few are found. Equally interesting is the throne of Attila: it is not clear from where this name derives since Attila, it is certain, never set foot on the island.

The “Last Judgment”: the work that leaves you speechless

The fame of the Cathedral of Santa Maria Assunta also derives from the incredible Venetian-Byzantine mosaic that you can admire on the counter-facade (that is, the internal counterpart of the facade). It is an admirable example of depiction of the Last Judgment. The decoration is divided into six registers (decorative strips) and deserves our full attention for the richness of characters and details that it presents. The gilded background is typical of the mosaic (but also pictorial) decorations of the early Christian, medieval and Byzantine periods since the gold refers to a mystical and sacred dimension. This work was carried out during the construction of the church, which took place between the 7th and 12th centuries. Other mosaics can be admired for example in the apse basin and in the triumphal arch, as is typical in the cathedrals of Byzantine inspiration.