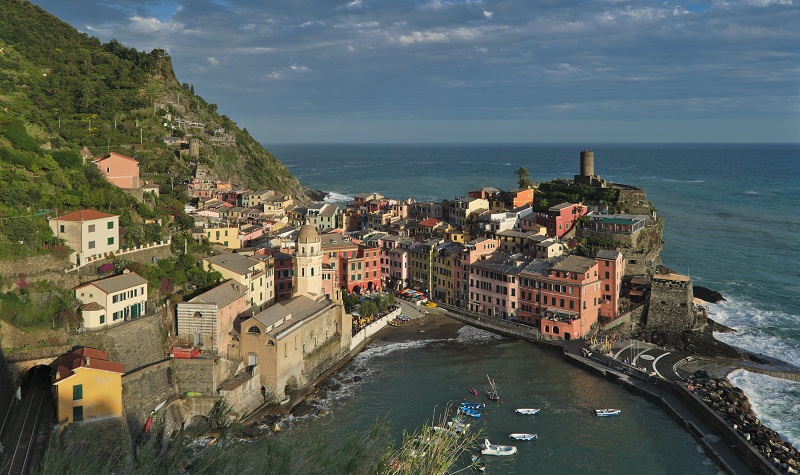 Vernazza, the most beautiful of the Cinque Terre

The panorama and the beauties of the maritime cities of Liguria are famous all over the world. The marvelous villages of Monterosso al Mare, Corniglia, Manarola, Riomaggiore and Vernazza constitute those that in Italy and in the world are known as the Cinque Terre. Today we want to talk to you about the latter, which is considered by many to be the most beautiful seaside town on the eastern Ligurian Riviera.

As mentioned, Vernazza is considered by many to be the most enchanting of the Cinque Terre on the coast of La Spezia. Together with its four sister cities, the city has been included in the list of UNESCO Heritage. Its isolated location makes this country even more characteristic. Immersed in the sumptuous colors of its houses and in the brilliant blue of the sea, Vernazza is a quarter of an hour from La Spezia and can be reached thanks to a winding and not exactly smooth road. Once in the village, all you have to do is leave your car in the two available parking lots and enjoy a walk to reach the center.

The main economic resources of the small Ligurian town are derived from agriculture, with the typical terracing of the Ligurian landscape and, obviously, from tourism. The cultivation of olives, lemons and, above all, grapes is of great importance. The Vernazzani wines and, more generally, the Cinque Terre wines are in fact much appreciated in the national territory.

The city is dominated by the Doria Castle, a medieval fortress built on the rocky ridge and about seventy meters high. The fortification dominates the natural harbor of Vernazza and the remains of its city walls almost merge with the jagged rocks of the coast. The first nucleus of the castle dates back to the domination of the Obertenghi, suggesting that a town already existed in the 11th century. Certainly the position of the city was particularly favorable for commercial exchanges and it is not excluded that its foundation is even coeval with the Roman Empire.
The other fortification of the city consists of Belforte, a quadrangular medieval bastion that stands on the rocks of the promontory, which dates back to the Genoese domination of the town.

The religious center of Vernazza is certainly the church of S. Margherita d’Antiochia, dating back to the early thirteenth century and built on an earlier Romanesque building. This parish has the particularity of developing on two floors and having one of its sides protruding directly onto the sea. The consecration to the saint derives from the legend that wants a chest with its relics to be found right on the beaches of Vernazza. For the interior of the church an unmistakably Gothic style was used (the tabernacle is of great value) and slate was used, a stone typical of the Riviera di Levante.
Not far from the center, however, is the Sanctuary of the Madonna di Reggio, which offers one of the countless views to visit with the camera around its neck. Vernazza, in fact, due to its scenery, is considered as a kind of paradise for landscape photographers.