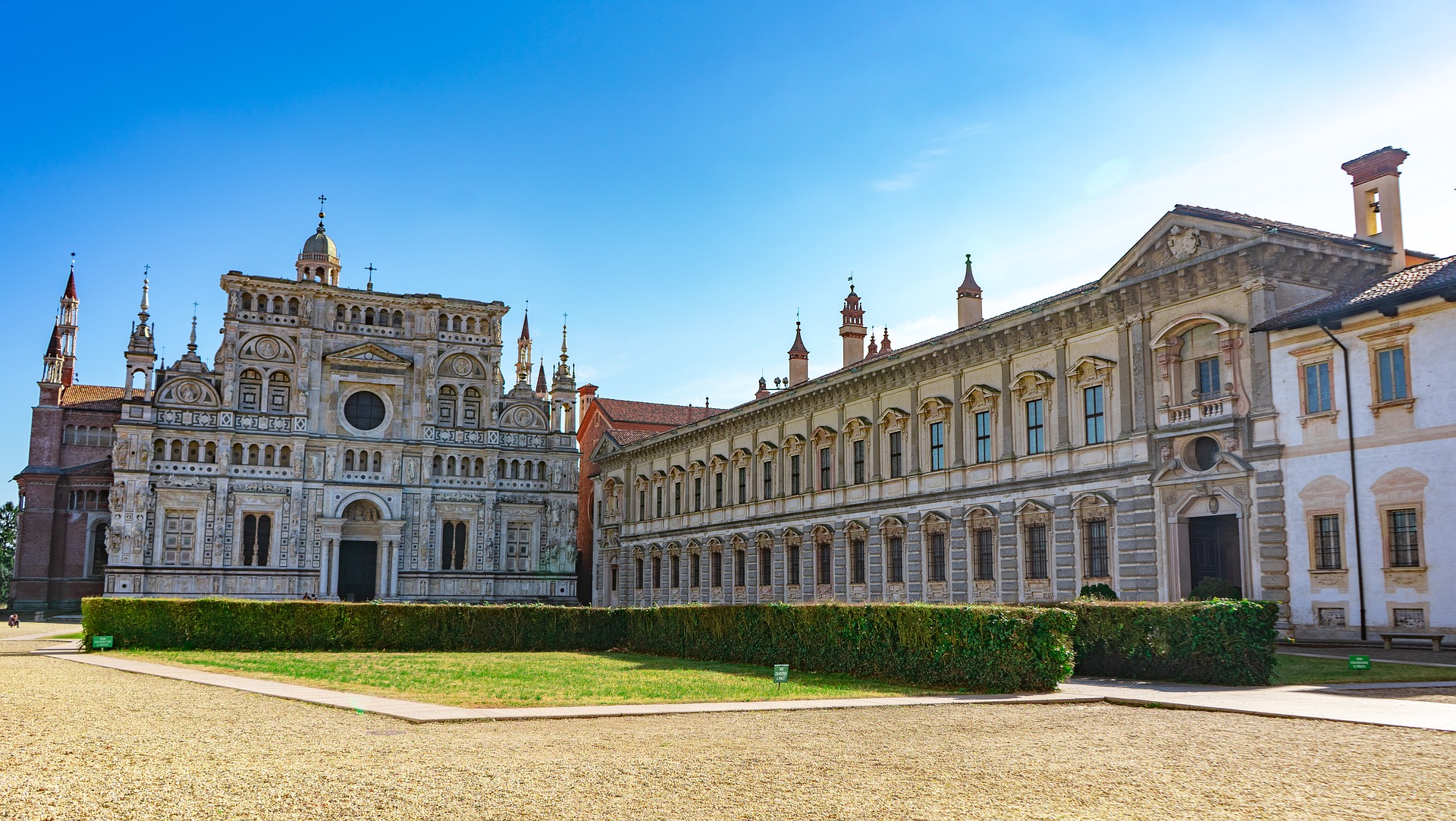 On May 3, 1497 it was consecrated. Exactly 523 years ago: half a millennium. A really important time in spite of which we can still observe it in all its magnificence. It seems to us lying immersed in the quiet of green fields. It is the Certosa of Pavia.

Certosa of Pavia: born from a vow

The story of a mother is at its origins. Caterina Visconti, wife of Gian Galeazzo, who in 1385 saw her first painful pregnancy fail. Caterina and Gian Galeazzo, Lords of Milan, relied on the Virgin by making a vow. That is, they would have named every male child they would have Mary, as middle name. And so it was in fact: Giovanni Maria and Filippo Maria Visconti were born. But it is not this vow that interests us, but a second pronounced precisely between the birth of one male child and another. In fact, between the two surviving heirs, Caterina suffered a very difficult third pregnancy. The baby passed away but his mother was miraculously saved.

In gratitude to the virgin for having spared her life, Catherine made her second vow, this time much more material: she ordered the construction of a Carthusian monastery near Pavia. The story is precisely witnessed by Bernardino Corio, who told it in his “History of Milan” of 1503.

The project was developed about 8 km north of the city of Pavia. An area very dear to Catherine. The works began under the Duchy of Gian Galeazzo but continued for years. Her children have presided over the first foundation. A work that continued even after the conquest of the duchy by Francesco Sforza. And up to Ludovico il Moro.

The Certosa had its official consecration on May 3, 1497 in front of a very large crowd who found themselves celebrating a building that was actually not completely completed. Another solemn ceremony had already taken place in 1474. A large procession, four thousand people who, starting from the Castle of Pavia, moved towards the construction site. A ritual to honor its founder, Gian Galeazzo, whose ashes were transported to the church.

The bas-reliefs that decorate the entrance portal remain today as a witness of that moment. The church had been designed as a dynastic mausoleum of the ducal family. They had imagined a grandiose construction with three naves. And then pinnacles and arches. Elements that weave different styles, derived from different architectural periods. From late Gothic to Renaissance. But the beauty of the church owes a lot to the context in which it fits. The monastery with its cloisters and galleries.

According to Bernardino di Corio’s story, Caterina pointed out that “a Carthusian monastery with twelve friars should be built”. And the cloistered monks who initially inhabited it were actually twelve. Income from fields and large estates gradually allowed the complex to be expanded. And several religious orders alternated over the centuries. Today it’s up to the Cistercians.

Next to the monastery, today there is the Museum of the Charterhouse, administered by the Superintendence for Historical Heritage of Milan. There, you will find in detail the historical and family notes that were the foundation of this Italian jewel that bears its 523 years with unchanged grace.