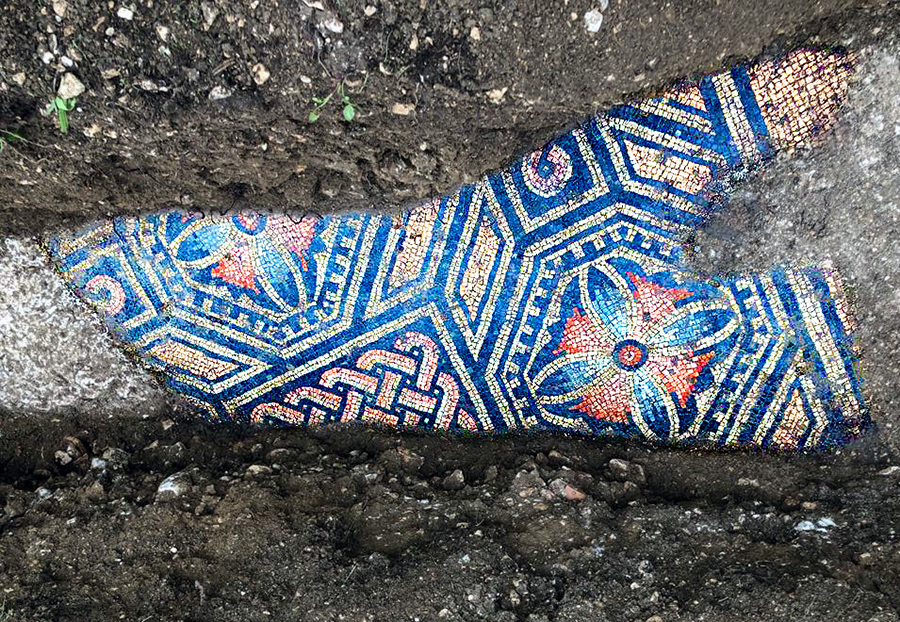 A Roman mosaic among the Vapolicella vineyards. An extraordinary discovery

They were really well hidden, but you know when the story has to be discovered, something always happens. And it was really a lot of beauty that emerged. Who would have imagined that under one of the largest and most important vineyards in northern Italy there was a Roman villa. That’s right one of those villas that belong to the history of our peninsula, rich in mosaics that tell a part of ancient history. A truly extraordinary discovery: a Roman mosaic among the Vapolicella vineyards in the Veronese area. These are the lands that give Amarone a fine wine produced in the area. Vine trees that we can say fed on a soil rich in history

A mosaic of the floor of an ancient villa

The finding took place in via Villa in Negrar. It would be a mosaic dating back to the third century after Christ. These are the floors of a villa which probably gives its name to the hamlet. And slowly the various parts of this precious place are emerging, which for years has been buried in the sight of man but which has been preserved. “There was a large central room measuring ten by seven meters – explained Gianni De Zuccato, archaeologist of the Superintendency -. Then there were other rooms on the sides, one with the apse. “

The discovery of the villa and the mosaic, a bit of history

According to the study that was done on the site, the mosaic of the Villa di Negrar hamlet and therefore the site was identified in 1922. The passionate archaeologist Tina Campanile is responsible for the discovery of some remains. Like those of other Roman villas on Lake Garda, in Brenzone and Desenzano. Then some documents also revealed that around 1925 the owner of the time came to terms with the municipal administration. His goal was to use the land for agricultural purposes. And in the 1980s even the construction on it was avoided. But nature has run its course. Above the villa, in fact, the vineyards of Valpolicella have flourished. Amarone wine has been produced for years, and the properties have changed. Now it belongs to the sisters Ferrari, Antonella, Simonetta, Elisabetta, Emanuela and Monica.

Hence the commitment of Mayor Roberto Grison to restore the villa to its history. And thus the negotiations between the Municipality, the Superintendency and the owners were started. Carotings and analyzes were then carried out on the ground with the Sap (Società Archeologica Srl) operating team. Excavations coordinated by the Superintendency have started and the first remains have emerged.

A find that has aroused great interest. The mosaic images that have been published by the Municipality of Negrar on social networks have also been relaunched by the CNN. “Now the constraint on the entire area is more stringent – added De Zuccato – so there should be no more mistakes.” It will be necessary to make a purchase proposal to individuals to have the area. But it even seems that an important foreign winery has asked to buy the entire vineyard, while leaving the archaeological site available to those who want to see it.

The hypotheses for the use of the site

And now that the site has been discovered, it is necessary to study possible hypotheses for its use. Also because in the post Covid and with the reopening of many archaeological sites, this too could attract many visitors. The Superintendency, the owners of the area and the Municipality are in fact trying to identify ways to make the site available and accessible.