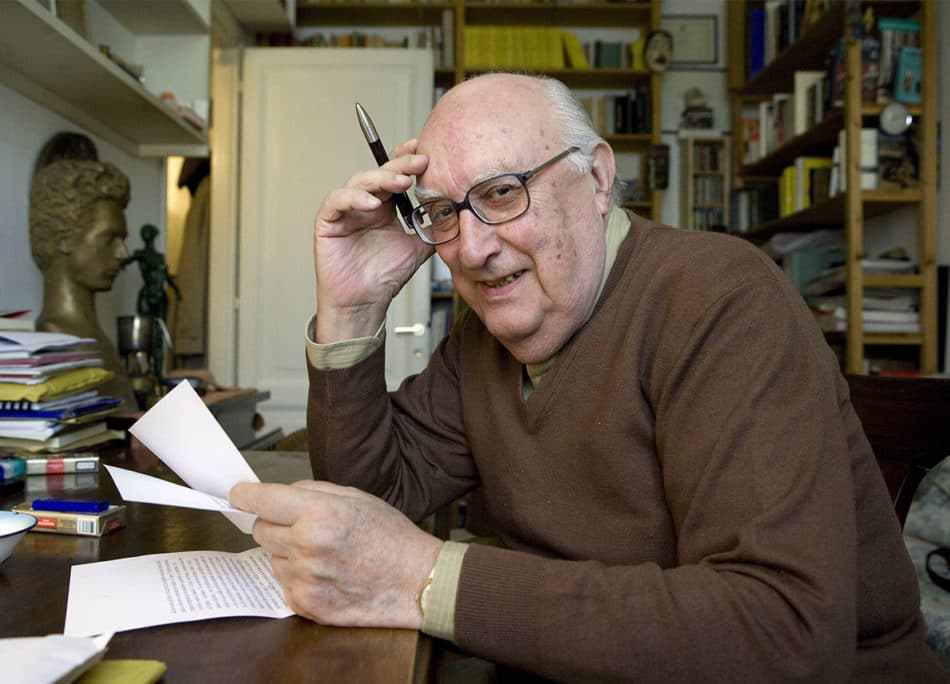 Andrea Camilleri, a successful author that the world cries

Andrea Camilleri, a life parable of more than ninety years, full of emotions, twists and a bit of luck.

Early twentieth-century Sicily was beautiful and Camilleri remembers it with nostalgia, when he went on a small boat with his father. It was romantic to fish, immediately fry the fish and enjoy it at the time, something that belongs to another era.

Andrea Camilleri remembers his grandmother, a personal friend of Pirandello, an intelligent and acute woman. In the writings of Camilleri also emerges a tender love for his father, a proud and righteous man who is very inspired by him. In the figure of the future Salvo Montalbano, there is that beloved father. During the war he does not suffer from hunger, but he sees poverty. The Americans arrive and one day behind a net, he sees an American soldier under arrest.

He feels sorry for him, since in the midst of war, he finds a peer far from home, a bit sad, probably in retribution for nonsense. Then give him the few cigarettes he has. Later the soldier looks for him, finds him and gives him sacks of “well of God” to thank him, including chocolate and linen. Generosity always pays. Andrea Camilleri, at that historical moment, does not yet know what he will do, but fate is looking for him!

Camilleri and the academy of dramatic art

The Sicilian author has always said he believed only in San Calogero and nothing else. After the war he wants to reopen the section of the communist party of his country, and only the bishop helped him. The high prelate gives him confidence, because he sees him as honest.

Sicily begins to stay close to Camilleri who goes to Rome and manages to enter the Academy of Dramatic Art, attending with Gasman. The experience at the Academy unfortunately lasts very little, due to the reversal of fortunes. Camilleri feels a little lost, and must return to sad Sicily. Life is strange, since many years later, the Sicilian writer will return as a teacher to that school, appreciated by the students. Once again destiny shuffles the cards and in RAI there is a little place for him, small but something. Since then Andrea Camilleri has worked hard as a screenwriter and author on state TV.

He starts late to look for a publishing house, and some time later, he publishes books that conquer the public a little at a time. That commissioner remained in the drawer for many years, then came to worldwide success. Even Leonardo Sciascia was not convinced of that particular language, but Camilleri sells thirty-one million copies all over the world! The world today mourns a unique and unrepeatable author; father of a language mixed with Sicilian dialect, which will remain unchanging.

That Montalbano, a character that more than anyone else captures readers and fans alike, will remain immutable for his pure honesty. On TV a similar success has few precedents, to the point that even the replicas capture thirteen million viewers. Literary Montalbano is viscerally Sicilian. The commissioner is full of defects, and readers know them and forgive them all, because he is honest, upright and crystal clear. Andrea Camilleri remains closely connected to his commissioner.

Vigata, where the inspector works, does not exist, but for readers it is real, like the honesty of the protagonist, which is that of the author’s father. The eternal girlfriend Livia and a pure Sicilian will survive! Over the years, debilitated and almost completely blind, the author, with his inseparable cigarette, leaves us on tiptoe at ninety-three years.

Today, the social media drip thousands of messages for him and all the highest authorities dedicate a thought to him. Physical absence will be milder, since the writings remain and will be a source of inspiration for those who can think of publishing even at the age of 67! Thank you for having explained “the shape of the water” and that “paper moon” exists!