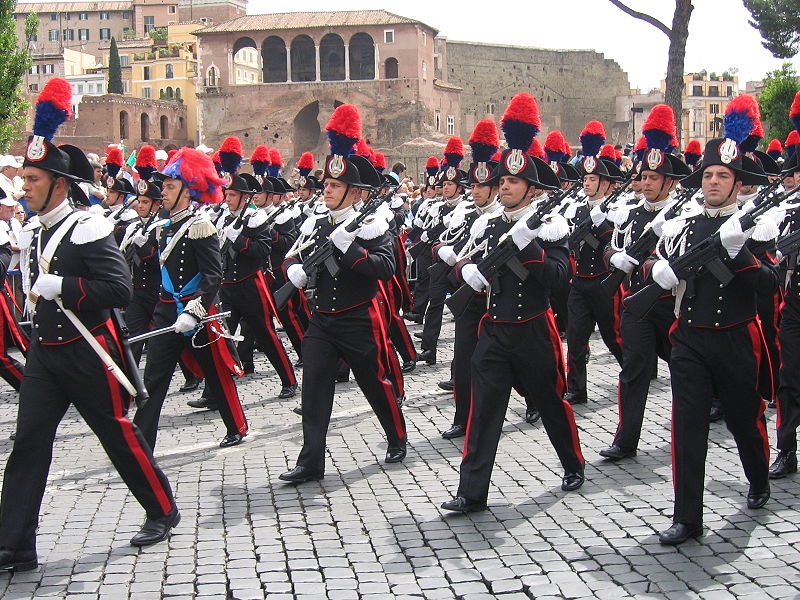 Arms of Carabineers, 206 years ago the Benemerita was born

Protection and defense of Italy, but also contributing to its growth. These are the principles behind the birth of the Carabineers Corps. The “Benemerita” was founded on July 13, 1814, an important date and part of the history of Italy. Even if the armed forces also celebrate on June 5, what is commonly referred to as the foundation date. So to understand a little more about this security corps, let’s try to retrace its history. And let’s do it today just two hundred and sixth year after the birth of the Corps.

Carabineers corps, the happy intuition of the sovereign Vittorio Emanuele I

Did you know that the merit of having created Carabineers corps is due to Vittorio Emanuele I king of the Sardinian-Piedmont Kingdom? In fact, as reported by the documents of the time, it was he who instituted it on July 13, 1814. Through the document on “the royal licenses”. “A Corps of military distinguished by good conduct and wisdom, called the “Royal Carabineers Corps” (…) – we can read in the document -. In order to contribute more and more to the greater prosperity of the state, which cannot be separated from the protection and defense of our good and faithful people, and the punishment of the guilty”.

It was therefore the then sovereign who promulgated the Royal Carabineers Corps with the Royal Patents in Turin. A historic stage because the role of this body was precisely to defend the state, protect public safety, but also a police body with special duties and prerogatives. And this is what the Italian Armed Forces still do today.

From the nineteenth century to the present day, a leading role in defending Italy

When Vittorio Emanuele I of Savoy promulgated the law it was the period of the Restoration, of rebirth for Italy, the prelude to a period that would have led to many battles and riots but would also have affirmed its unity. An all-national military corps therefore had a very important role for the state which took its most important steps in those years. Carabineers Corps, therefore, was a light infantry corps (with a cavalry component). It was a military corps made up of people selected in the excellence of the Piedmontese departments. So an elite body. As also reported by the official website of the Army, their first general was Giuseppe Thaon di Revel, called to hold the highest position since August 13 of that year. And then in 1833 Carlo Alberto di Savoia wanted it to adopt the colors of the plume that we know scarlet and blue.

The success of the police force is mainly due to its being at the service of the community. In fact, born in Piedmont, it was spread all over the territory. This is how the Army has accompanied generations of Italians with its vigilant and reassuring presence. Many roles and tasks from its birth to today: among the facts of the history of the Kingdom of Italy to the birth of the Republic. And today, in the roles it holds for the peace and security of the peninsula. There are many difficult and dramatic moments that have characterized Italy and in which the Army has always been present.

The appellatives and the words with which we know it

Many are the rewards for the flag and the awards of many soldiers. “La Benemerita” is precisely the name with which we all know it. As “Faithful over the centuries” it’s its motto. And then its loyalty is inspired by the march of the ordinance “La Fedelissima” as the prayer to Maria “Virgo Fidelis“, to which Pope Pius XII, in 1949, chose to entrust the Carabinieri, setting the anniversary on November 21.

So today we remember that anniversary for the Army. But many also celebrated June 5, commonly known as the foundation date, because we remember the date of granting, in 1920, the first Gold Medal for Military Valor to the Flag, for the participation of the Carabineers in the First World War.