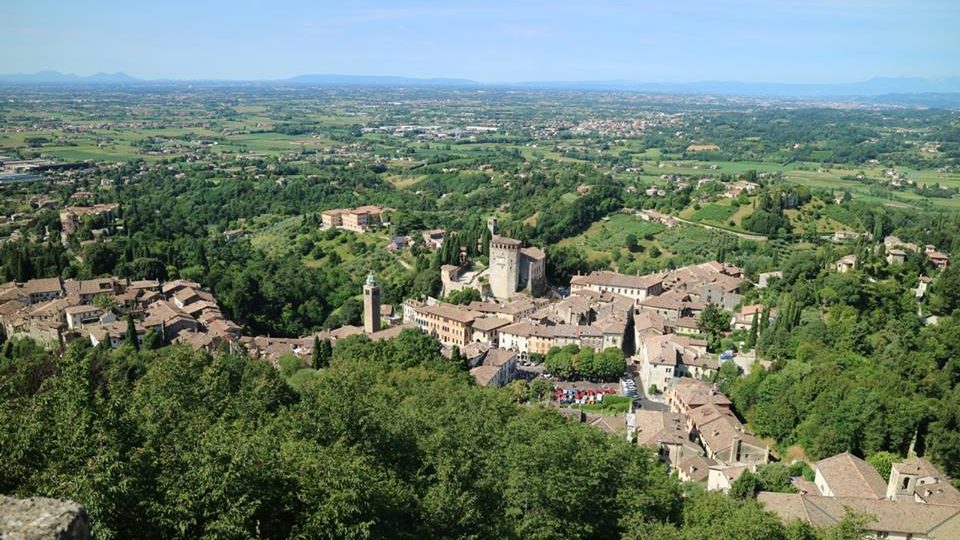 Asolo: “the village of a hundred horizons”, history and culture

Veneto is a land of assault tourism (just think of Venice) but also of inland visits where philosophy is slow. The village of Asolo is included in the famous list of the most beautiful villages in Italy. It is located on gentle slopes between the Brenta river, the Treviso plain and the Pre-Alps. An area rich in history and culture where you can walk endlessly.

From prehistoric men to illustrious writers

It seems that the hills on which it lays named him Asolo. The ancient name, Acelum, derives from a term that in ancient times means “sharp, pointed”, referring to the very top of the hills. Even before it had a name, however, Asolo was frequented by prehistoric nomads who left several traces of their passage there. Among these there are also bones belonging to a female mammoth dating back to about 35 thousand years ago.

Leaving Prehistory, Asolo continues to be inhabited. An important development is due to the Roman domination starting from 59 BC, when the Latins joined the already present Paleoveneti citizenship. His control then passes from hand to hand until the long rule of the Serenissima Republic of Venice. From the nineteenth century in particular it is populated by illustrious citizens, poets, writers and foreign artists. Such as Robert Browning, Eugene Benson, Gianfrancesco Malipiero and Freya Stark who find their ideal place of life there.

The “hundred horizons” of Asolo

Among the many who praised the beauty of the town there is also the poet Giosuè Carducci, who called Asolo “the village of a hundred horizons”. This is because from its privileged position, Asolo turns its gaze towards the Treviso plain to the lagoon. In perfect weather conditions you could also see the Venice islands. The profiles of the Berici Hills and the Euganean Hills in the Padua area can also be seen. While to the north you can admire the Prealps and in particular the Monte Grappa massif. Asolo is located 190 meters above sea level and from every corner you can enjoy a beautiful view. But for a spectacular view we recommend the top of the civic tower and, when it reopens to the public after the restoration, the medieval fortress. As the great German poet Goethe said, to get to know a city we must also look at it from above!

In Asolo you can enjoy a slow visit. A walk through the streets of the historic center, a visit to the rich Museum, an aperitif in the square admiring the flowered balconies and a meal with a view. It was the British writer Robert Browning who coined the term “asolando“, right here in Asolo, which indicates a sort of peaceful stroll surrounded by beauty.

Two steps in fact are always recommended and while you are walking you can visit the Cathedral (which also boasts an altarpiece by Maestro Lorenzo Lotto) and the small churches of Sant’Anna, Santa Caterina and San Gottardo. At the Civic Museum you can learn about the archaeological history of the village, admire paintings and paintings (including two whims of Bernardo Bellotto and two marble works by Antonio Canova) and the rooms dedicated to the three most important women lived in Asolo. They are Caterina Cornaro, queen of Cyprus, theater actress Eleonora Duse and English explorer Freya Stark.

If you want to spend a weekend in Asolo, there are many places in its immediate surroundings that are absolutely worth a visit. First the two Palladian villas: Villa Emo in Fanzolo di Vedelago (15 minutes by car) and Villa Barbaro in Maser (5 minutes by car), which is also a UNESCO heritage site. Still a 15 minute drive you can reach Bassano del Grappa, a gem at the foot of the Monte Grappa massif, or Castelfranco Veneto, a splendid town that gave birth to the painter Giorgione (and you can also visit the museum house). Asolo is located in a rural area devoted to the cultivation of vines. The hills of Prosecco extend from the hills of Asolo to the towns of Valdobiadene and Conegliano. The ideal in these places is a bike ride: an aperitif with a glass of Prosecco is a must, perhaps accompanied by other local products.