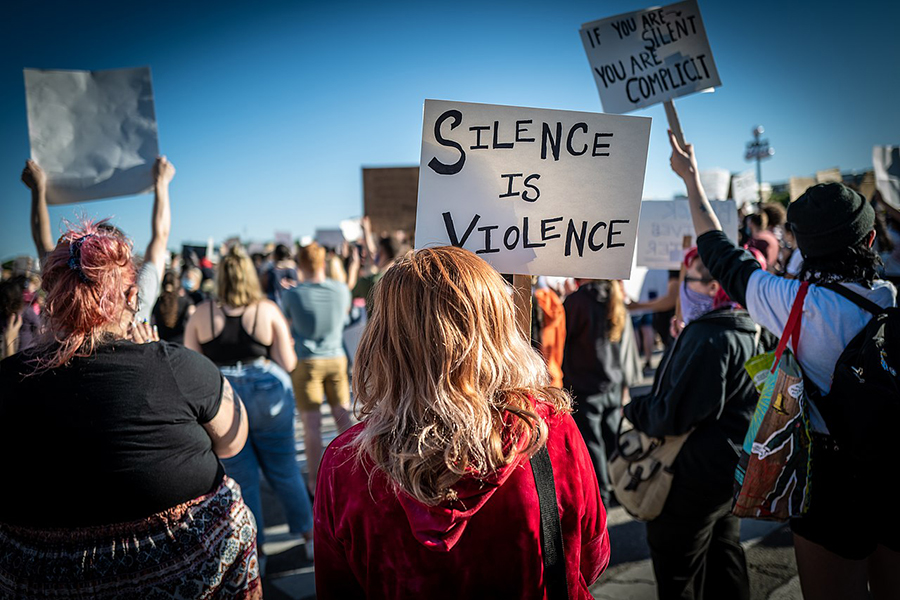 What is happening in America these days makes us think. Not only because the rampage of violence happens in a period of international health emergency, but also because the whole world cannot pretend nothing in the face of so much hatred. The death of George Floyd, the black man killed by the police, provoked outrage. Numerous protests have started in America with the “blacklivesmatter”. The US says no to racism and any form of discrimination. Group protests until yesterday, when America stopped for the funeral in Minneapolis of the 46 year old African American.

The demonstration in America was born with the international activist movement “Blacklivesmatter”, black lives matter, committed against racism. But unfortunately, alongside peaceful demonstrations, protests have provoked violence in some cities. Far from the ideal that pushed thousands of people to join the movement. And among the many names supporting the peaceful protests there is also that of an Italian, the musician Gabriele Ciampi.

Blacklivesmatter, a protest that is involving the world

Floyd has become the symbol of the struggle for African American rights. Those words “I can’t breathe”, I can’t breathe, extreme request for help before I die, have become the slogan to raise public awareness of what’s happening in America. A state that stopped for the last farewell to the 46 year old, after days of chaos, fury, violence. To tell what is happening in the United States is also the maestro Gabriele Ciampi, conductor composer and only Italian in the jury at the Grammy Awards. He was in Los Angeles during the fighting. Hell, he said.

“I was at the main market, between Firefox and 3rd Street, one of the main streets, to make some purchases – he told Ansa. I spotted about 500 people on the road holding signs against the killing of George Floyd in Minnesota. In a matter of minutes, everything happened, at least 2,000 people will have arrived and the protest, until then peaceful, has turned with extreme violence.”

Ciampi then decided to support the peaceful protest that spread within a few days also with the slogan #blacklivesmatter. “One of the scenes that shook me the most – he said – was seeing the police officers throwing tear gas at people, I had never seen such a thing before, it is really scary and also makes you think. A similar situation has not occurred since 1992, the last year in which a general curfew was declared. At dawn the National Guard also arrived near my house, they blocked roads and highways with tanks and riot trucks.”

The Obama family asked Ciampi for help in support of the Blacklivesmatter movement. “I am very close to the Obama family – he added -. And I’m proud to have received their invitation to support the commitment to non-violence and anti-racism in America. Carried out by the Obama Foundation. I support the #blacklivesmatter because, thanks also to the great commitment of the Obama family. It remains a non-violent social movement in support of the African American community in America. A movement in which, among the various arts, music has the task of educating. Music breaks down any barrier and allows, by closing your eyes, to see the light even in total darkness.”

And in Italy football stops, many in support of the blacklivesmatter

For several days, Italian football has also left a mark in the face of what is affecting America. The #BlackOutTuesday was launched, a day to reflect on racism. Many have posted on the social networks a black screen, as a sign of mourning, a silent protest just over a week after Floyd’s death. Among the players who play in Italy Dybala, Matuidi, Bonucci, Douglas Costa, Khedira, De Ligt, Pjanic and Bernardesch. And yet Eriksen, Candreva, Asamoah, Vecino, De Vrij, Borja Valero, Kessié, Paquetá, Calabria, Musacchio and Leao. Others such as Immobile, Koulibaly, Insigne, Mertens, Milik, Lucas Leiva, Luis Alberto, Rincon, Luca Pellegrini, Petagna, Ribery, Quagliarella, Juan Jesus and Florenzi. And then the symbolic image on the social networks of the Roma team.

And so while America stopped for Floyd’s funeral and the echo of the protests went around the world, the call for non-violence came from many sides. Protests, but as long as they are peaceful. In a time when all nations are on their knees for the Covid emergency, which unfortunately still causes many victims, the desire to huddle around the demonstrators arises. And against any discrimination. At the same time to spread the culture of non-violence. In memory of many Americans who remained in the hearts of many who made the history of defending human rights.