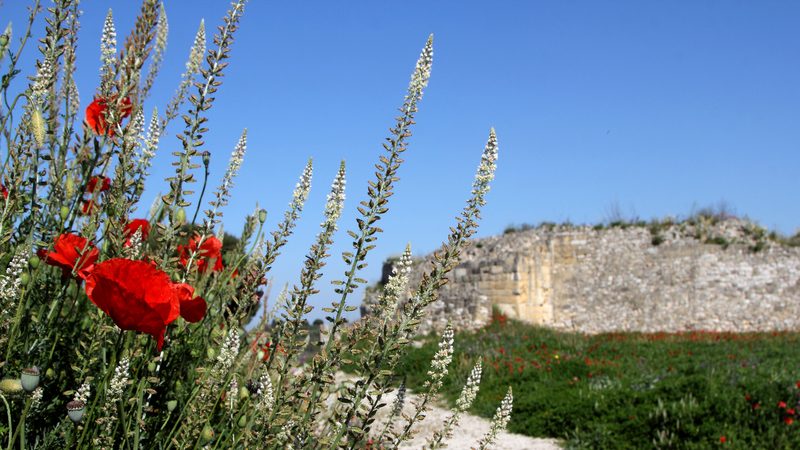 Spring and summer sun cover the soil of Canne della Battaglia with yellow flowers and red poppies. They are a mantle of freshness that, in union with the green of the vines, offer a deep peace to those who visit us. Looking out from the heights, the green fields are laid out as a backdrop to the remains of what was once an atrocious battle theater. Canne was an ancient city of Puglia: it was born on a rise on the right bank of the Ofanto river, once called Aufidus. Today Canne remains a large archaeological site with Neolithic caves, ceramics, statues, megalithic stones. These remains bring to light the clash of that August 2nd, 216 BC which in this article we will try to narrate.

Canne della Battaglia and the power of Hannibal

Theodor Mommsen calls him “the greatest general of antiquity”. Hannibal, son of Hamilcar Barca, is the key figure of Canne della Battaglia. An excellent strategist, he did not look favorably on the Romans, who tried to fight and fight tenaciously until the last moment. Annibale’s anti-Roman hatred stems from an oath addressed by his father at the age of nine. In fact, Amilcare, beaten by the Romans in the Egadi Islands in 242 BC, was a supporter of maritime commercial policies that led him to clash with Rome. In the footsteps of his father, Hannibal, unleashed the second Punic war, among the most terrible and ferocious of all antiquity.

“History says that the city was ruined when Hannibal came with his army to this part of ancient Apulia […]”. “Never had he had to fight such a vast space and never had there been a major clash between two such great powers”. Thus writes J.B. Claude Richard De Saint – Not in the prized book “La Puglia” by Editalia in 1983 in reference to the defeat of Canne della Battaglia.

Canne della battaglia and the arrival in Italy of Hannibal

Hannibal, Hamilcaris filius, fuit Carthaginiensis. The great General Barca as a child left for Spain alongside his father Amilcare. Become supreme commander at just 25 years. His qualities as a condottiero soon became known, so much so that Philip V of Macedonia wanted to ally with him after the Battle of Canne. After conquering Saguntum – a Spanish city of Greek origin, it caused the second Punic war. The great Hannibal conquered Spain, he crossed the Pyrenees passing through the Pertus and beating all the Pyrenean peoples who opposed him. Finally it reaches Italy through the Alps, on which it juggles with superhuman efforts. Even here, any resistance from local populations was completely useless.

Hinc in Apuliam pervènit. After entering Italy through the Alps and having defeated all those who crept into his path, Hannibal headed for Tuscany through the Ligurian Apennines. His ferocity is merciless: he beats the Padana consuls, he kills the Consuls Gaio Flaminio in Tuscany and Gaius Centenio. Finally from central Italy it arrives in Puglia.

The Battle of Canne among the most ferocious battles of humanity

Many scholars have arrived on the soil of Canne della Battaglia to reconstruct the fierce combat that led to the defeat of the Romans on August 2, 216 BC. In that year the new elections saw elected consuls Lucio Emilio Paolo and Gaio Terenzio Varrone, who were deeply in disagreement above all on the issues of war. The large Roman army was driven on alternate days by each of the two consuls and this proved to be fatal. Varro was in fact determined to challenge Hannibal on the pitch while Lucio Emilio Paolo proved to be more cautious. Varro, taking advantage of his day as a leader of the army, came ruinously into combat. The remains of Canne, walking in its archaeological area, tell us about this bloody battle that we briefly try to reconstruct.

Hannibal Barca: the greatest strategist of the ancient world

It is August 2nd 216 a. C. and Canne della Battaglia, in Puglia, Annibale annihilates the Romans for the fourth consecutive time. The nascent super-power will not however be Carthage although winner, but that defeat: Rome. The army of Hannibal is made up of about 50,000 men, while the Romans have between 65,000 and 80,000 at their disposal. The Battle of Canne is a battle in which a smaller army but with 20% of cavalry dominates over a larger army. That of the Romans, greater numerically but with cavalry to a minimum. The cavalry is deployed in the center and the infantry on the wings. The battlefield is flat and for the local peoples this part of the plain is still called “the Field of Blood”.

The General Barca on the battlefield

J.B. Claude Richard De Saint – Not in “La Puglia” by Editalia he writes: “It is said that this skilled general did not ignore how every morning at sunrise on these plains and along the Aufidus dominated a strong wind. Known, says Tito Livio, with the name of Vulturno, whose normal effect was to raise whirlwinds of sand and dust “. Hannibal takes sides in such a way that his army has this wind behind it, which would then have blown in the face of the Romans. The battle soon became a brutal melee, the space was delimited by the river on one side and by the infantry on the other. At the center the Romans launched their javelins, while Iberici and Galli started off against their opponents. We had come to the melee.

The Roman infantry converged ruinously in the center; and so he found himself surrounded by African infantry on both sides, which got the better of a skilled pincer operation. Over 50,000 Roman soldiers died. Hannibal’s strategy had worked. He orders the Spanish battalions and roosters deployed in the center to simulate losing ground, the Romans fall into the trap and enter the Carthaginian lines. At this point the Romans find themselves encircled and Hannibal orders a fake desertion to five hundred combatants. Thanks to this move, the Numids massacre the Romans, who were already surrounded on each side. Thanks to Pino Marchisella photographer for the photos.