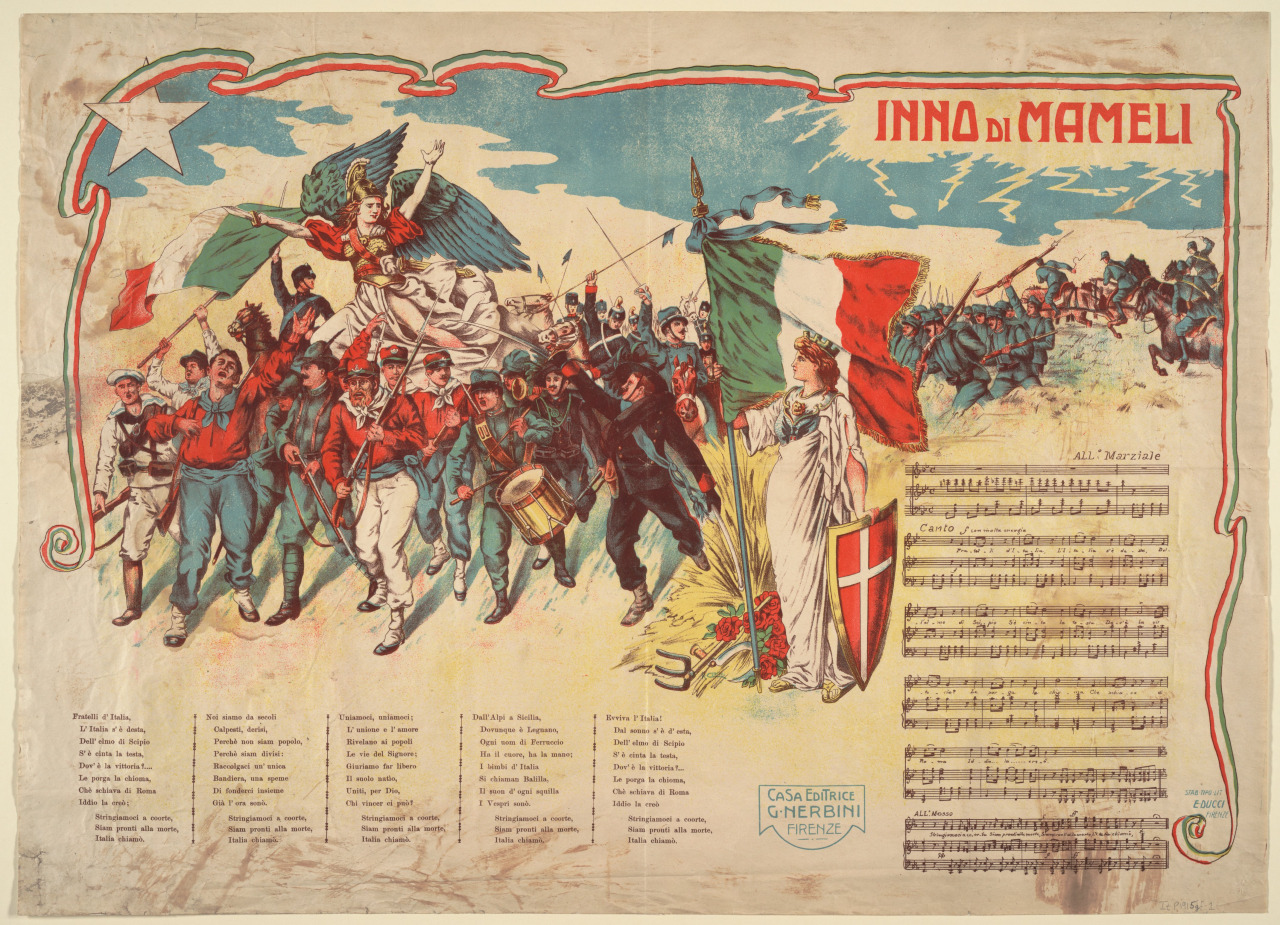 It is sung to commemorate national felling. It is the Mameli’s, the Italian National Anthem, that on December 10 celebrates 172 years from its first debut. A work that remained unofficial for a long time and that only recently received the statutory recognition. Behind it there is a story made of sacrifices and sweaty conquests. Principles that led to current modernity. Yet few are those who would be able to recite it in full. And so many have claimed to include it in school curricula for greater awareness of the country they inhabit.

We need to contextualize it to better understand. Italian National anthem is the son of the mottos that enlivened the national soil in the first half of the 1800s. A visceral and deep feeling. That of freeing oneself from foreign stranglehold and reaching ideals of redemption. It is within this framework that the Genoese Goffredo Mameli is one of many protagonists. As fervent patriot he composed the text of the “song of Italians” when he was twenty. It was September 1847 when the stanzas took shape from Mameli’s emotional ardor. But a melody was missing. That is why, in November of the same year, the work reached Turin.

Here the text was entrusted to the composer Michele Novaro who set it to music, so much so that he decided to make some changes. That final “yes” that we still hear screaming at the conclusion of the hymn. A movement of the soul that explodes, an impetus that knows no brakes. And so on December 10, 1847 “The song of Italians” lives its first debut. It happened in Genoa, on the square of the Shrine of Our Lady of Loreto. An intense text, certainly more understood at the time than today. Because the farther you move away from the time line of an event, the less you perceive its real value. And instead we should always feel the awareness that “what we are today is the fruit of what it was before”.

Words and parallelisms of meaning

The Hymn of Mameli knew immediately a certain success. Its catching melody and its important words soon made it popular. And yet for many years something remained unofficial. Why? With the unity of Italy in 1861, the Savoy Crown opted for a very different national song. Much more conservative, the Royal March seemed to fit in better with monarchical power. The work of Mameli was certainly the symbol of the Resurgence that alluded to Republicans ideals. And indeed a quick comparison with other hymns shows it well. The same Mameli seems to have taken inspiration from the Marseillaise. First expression of freedom, equality and brotherhood. Thus, according to some, that “let us gather at court” would be an allusion to the “Formez vos bataillon”, already present in the French anthem.

But also all the references to classical antiquity make us associate the Italian anthem to the Greek one. Moreover, these are lands that for centuries were the cradle of civilization. A recovery therefore of its grandiose origins. What about the clear reference to Austrian domination? In that stanza where “the eagle has lost its feathers” in which the winged animal refers directly to the Habsburg imperial coat of arms. But when was the national athemn made official? We are talking about a very recent period that perhaps many do not expect. Yet Mameli’s anthem was legally recognized only in 2017 when the Parliament conferred him the status of national anthem by law.

Among the stanzas of the Italian National Anthem

Today, compared to its original version, only the first verse and the chorus are repeated twice. But the national song is much longer. In its complete draft, in 1847, it consisted of five stanzas. A sixth was added only in 1859, not attributable to Mameli, who died ten years earlier. What does the hymn tell us? Ancient historical references and quotations of a certain importance. The Roman Scipione who won Hannibal thus freeing the peninsula from the Carthaginians. The battle of Legnano and the victory over Barbarossa.

And then Francesco Ferruccio, the hero of the Florentine republic. But also the allusion to the Sicilian vespers that during the XIII century drove out the Angevins. And then there is that verse: “the children of Italy are called Balilla”, obviously no reference to the fascist work. But to the certain Giovanni Battista called Balilla who in 1746 threw a stone at an Austrian officer. An episode that started the popular uprising towards the Habsburgs and that ended a year later with the liberation of the city of Genoa. And it is precisely from the commemoration of this battle that Mameli’s hymn debuted. So a set of historical episodes. When people from the past ages fought from north to south. Thus reaching, among ideals and principles, that sense of union that made us, and still does today, a single people.