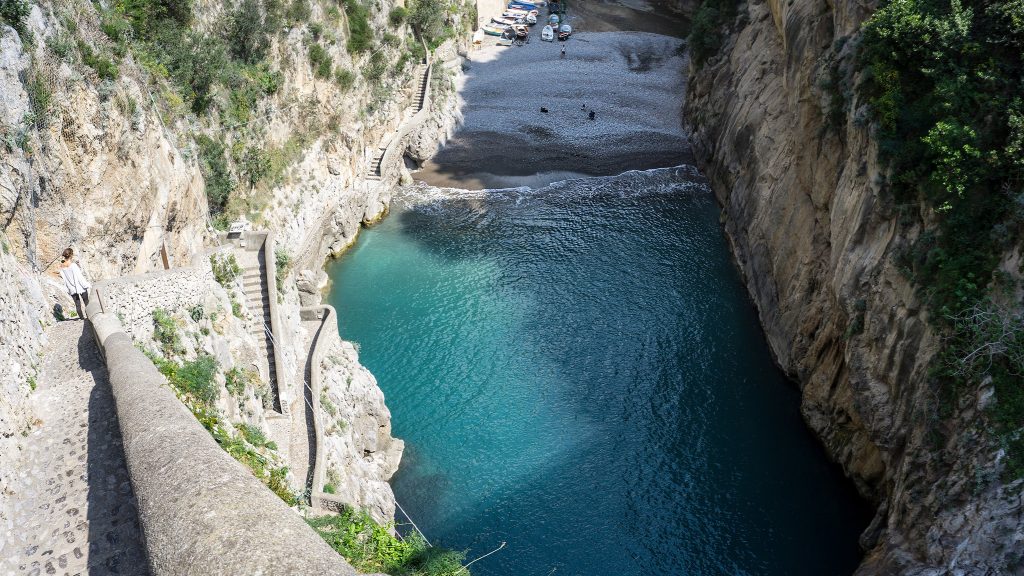 Fjord of Furore, a showpiece of Amalfi Coast

The Amalfi Coast is one of the most magical areas of Italy and it is precisely here that the Fjord of Furore is located, a corner of paradise among the Mediterranean seas. Here, the sun only arrives in the early afternoon and it is possible to have a mild climate even in the hottest summers. There is no real country, you can glimpse here and there some houses that emerge from the rock, which is why it is often called “the country that is not there”. Here you can admire the beautiful terraced vines from which fine wines of the Amalfi Coast were made.

The Fjord is an UNESCO heritage site since 1997 and, together with its 800 inhabitants, it has become one of the “most beautiful villages in Italy“. The Fjord is a very silent and peaceful place. Far from the most crowded and chaotic cities of the Amalfi Coast; some say that you can still hear the light voice of some nymph in love who remains hidden among the cliffs of the rock.

Where does the name of the city come from? Legend has it that the Devil arrived in Furore but the inhabitants of the country were inhospitable not enjoying his presence. The Devil took very aggressive nettles and subsequently ran away screaming and stamping his feet on the ground “furious“. Others instead explain that the name derives from “Terra Furoris“. At that time the territory beared this name because of the waves that crash noisily on the rocks.

Fjord of Furore was a great center for mills and paper production. Downstream there is still a spreader in which paper was dried. In addition to paper, another major economic use was the milling of wheat. The streets of the small village are indicated with the names of the most important families of the place: Li summonti, Le porpore, Li cuomi, Li candidi. The oldest one is the Summonti family who arrived in the Fjord of Furore around 1400.

When you arrive to Fjord of Furore you have the impression of having already been there, perhaps because there are many films set in this magical place. The Fjord leaves no room for imagination and shows itself in all its beauty: olive groves, vineyards, lemon groves, majolica and the great blue of the Mediterranean sea. Its beach is very small, about 25 meters, and can be accessed by passing through a path that starts from the Amalfi State road. On some days this small beach is very crowded but it is possible to visit the other areas of historical and naturalistic interest. Every year, in July, an international diving competition takes place. Athletes jump off the 28m high bridge.

If you are fond of walking, the paths that are around the village are really many: the Abu Tabela Path which is located in the Pino area and lasts about 50 minutes; the Path of Crow’s Nests a bit longer than the previous one. If you are a reckless instead you can walk the Path of the Crazy Bats which lasts about 30 minutes: you start from Fjord of furore and arrive at Punta Tavola; you will pass through dense vegetation that leads to the old paper mill, now inhabited by bats and surrounded by a mysterious and sinister air. The path of the Agave in bloom lasts about an hour and a half and will take you from Punta S. Elia to Marina di Praia; the walk of love crosses the large rock walls for a small stretch.

Fjord of Furore: a wonderful village

Fjord of Furore is a flagship of sustainable tourism, in full respect for nature. Here we can find the “Ecomuseum of the Fjord of Furore“, a project for the recovery and enhancement of the structures; such as mills and other water systems.
Among prickly pears, agave, aromatic plants and surprising views, Fjord of Furore remains one of the most magical villages in Italy and deserves to be visited.