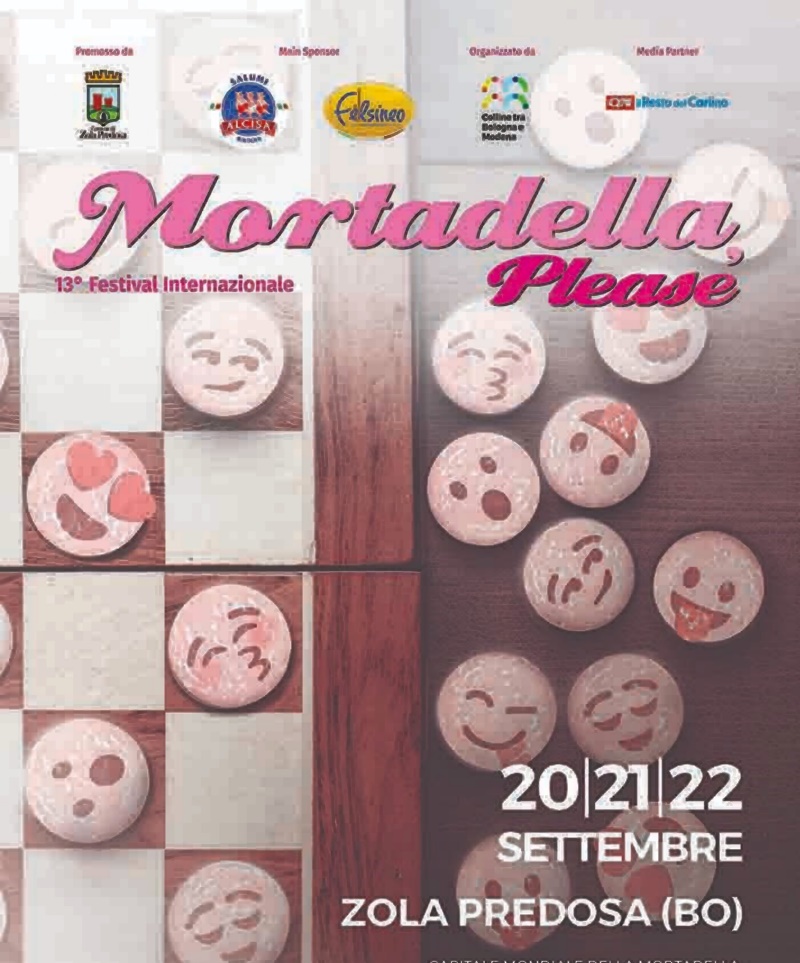 International Mortadella Festival for the thirteenth year from 20 to 22 September 2019.

La Mortadella, Queen of gastronomy, which boasts a centuries-old history, is back. Known worldwide as “La Bologna”, it is an PGI product.

International Mortadella Festival, to celebrate Italian excellence. The origins of this paradisiac sausage date back to the ancient Etruscan Felsina, or to the Roman Bononia. In the Archaeological Museum of Bologna, there is a stele from the Roman imperial era, with seven piglets in the pasture and a mortar with pestle.

Today, “Mortadella Please”, exists since 2007, and is the first kermesse in the world dedicated to mortadella, in Zola Predosa, the main production area. The festival is a moment of absolute enhancement of the mortadella of the Bolognese Hills in a thousand variations. For three days the city center will host tastings based on Mortadella, shows, and opportunities for deepening and entertainment. “Mortadella, Please”!

It is a fixed moment, also thanks to the collaboration of the synergies present in the territory of Zola Predosa. It starts on Thursday 19 September at 7.30pm at Villa Edvige Garagnani with a Round Table, “Ambassadors at the table: when passion is marketing”.

On Friday, on the other hand, the “Reno Lavino Samoggia” Pro Loco network opens at 17.00 from the manufacturers’ stands; in the presence of the Mayor of Zola Predosa and the other authorities. From 19:00, opening of the restaurant and street food points, and from 8.00 pm there will be on the stage: Energie Rock Festival. There will also be a competition for emerging bands, but also “Mortadella Experience“, and “Mortadella & Cocktail“, with cocktail tasting paired with Mortadella.

Special guest, Salvatore Catiglione, who left Italy in 2008, to conquer the palates of the French, then returning home, where he also worked with Chef Bruno Barbieri. From 9.00 pm ambassadors at the table, meeting the Savigno Truffle, and presentation of the 36th International White Truffle Festival. “Mortadella & Sport” will follow, with sports performances. The program is really vast and continues Saturday with Trekking in the Zolesi hills; stop and tasting of food and wine products.

The whirlwind of the program includes a Foosball Tournament in the afternoon and also the exceptional exhibition of “La Mortadella di LEGO” and many other lego works! In the afternoon, sports performances again, and from 7.00 pm, the restaurant and street food outlets will be opened, following the “Mortadella Experience”; pastry show cooking, and the “Today I cook“. And then Mortadella in Jazz!

From Sunday 22 September, we will discover the secrets of Mortadella production with guided tours. At 12:00 there is the opening of the restaurant and street food points, and again Showcooking: “RiCreaCaccia alla Mortadella”; an original Treasure Hunt for children. From 7pm to 10pm, “Mortadellino in Argilla” workshop with Claudia, and many games by the Ricreamente and Mortadella Country Association. In the afternoon and in the evening area “Mortadella & Sport”. From 18.00 on the stage there will be the awarding of the literary competition “Once upon a time and there … a pink queen”!

Well the mortadella knows no boundaries, not even literary! It is one of the most recognized Italian excellences abroad and it certainly doesn’t look good in literature! Thus the first edition of the literary competition promoted by Edizione del Loggione was born. A preview of the reading of the story set in Zola Predosa of the anthology “Mysteries and delicacies on the Colli Bolognesi” by the actress Debora Pometti.