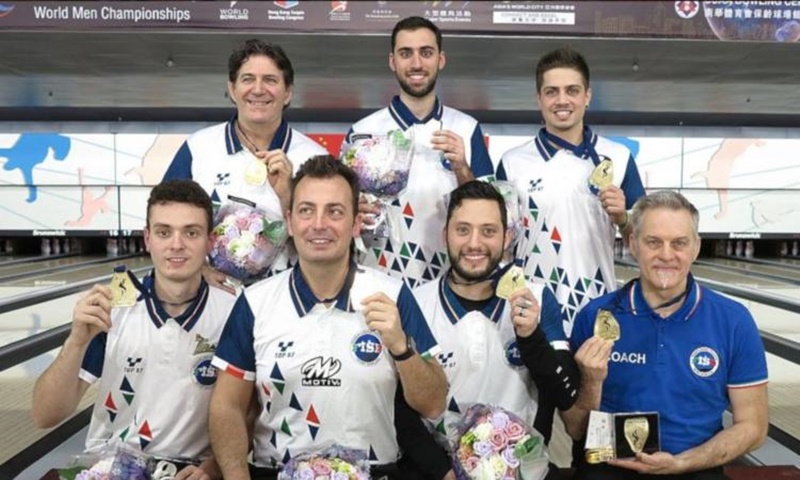 Italy bowling world champion beating the Americans in the final!

The team composed by Pierpaolo De Filippi, Antonino Fiorentino, Marco Parapini, Nicola Pongolini, Marco Reviglio and Erik Davolio has arrived incredibly on the roof of the world. The historic victory took place in Hong Kong at the head of coach Brandolini and seems like a dream.

The tricolor team, ahead of the Americans, beat Canada, which despite being shown a “hard bone”, was liquidated 190-179. Immediately after, the Azzurri competed head-to-head, getting the better of the Americans, beaten 2-0. It was an unthinkable result, as a handful of amateurs defeated the world champions in charge!

The final was broadcast by the Olympic channel of the IOC, and this was also an event. We must consider that before this great record, Italy had only one bronze at the 1971 World Tournament in Milwaukee. Now the medal collection becomes “golden”, and is in the company of other good results. The “Italian sextet” should have played the role of appearance, being composed of amateurs, and instead the role was the absolute protagonists! Rossi, president of the Italian Sport Bowling Federation, stressed that the trip was at no cost, apart from the hotel.

It was not easy, however, to arrive at a similar result, for which a very hard slope was recovered. The Italians started years ago from below zero, but rolling up their sleeves, despite the economic crisis, and the closure of many bowling, have re-emerged.

Only five years ago the federation was a commissioner and it is not cheap to consider it. Today in Italy the players affiliated to the federation are about 2,500, in addition to another thousand amateur players. It should be emphasized that the members self-finance, and this makes them even bigger. The Azzurri have arrived among the first four finalist teams, after a hard initial round.

Moved athletes have confessed to live and train for such intense and incredible moments. They face two of the best teams in the world by beating them after finishing 22nd at the last Las Vegas World Cup and it’s like a fantastic dream!

It would not be bad if the CONI rewarded bowling, which is one of the twenty-one associated sports disciplines, in light of this fantastic tricolor. This wonderful team of amateurs deserves praise, composed by De Filippi, owner of sandwich shops, Fiorentino, student, Parapini, who works in the Martesana Bowling Center; then again Pongolini, employee, Reviglio, building contractor, Davolio, baker. On the other hand, a group that earns millions of dollars, including the three best players in the world.

Six fans, including a baker and is legend

During the heart attack against the US, journalists and commentators of American TV, in front of Italian superiority, repeated “unbelievable”, “incredible! The American athletes gradually became more glassy, ​​petrified and could not believe what was happening. The Italians were showing cold blood, they believed in the enterprise, and so in Hong Kong the Hymn of Mameli resounded and the tricolor waved higher.

The greatest of us is fifty-three, the youngest twenty-two; you do not need to delineate them, everyone, because they are a group and as a group they have won making us proud of them. However, we can not fail to point out that the youngest, professional baker, at the world premiere, has won it!
Giovanni Malagò, president of Coni, proudly exulted on twitter in giving the news: “World Champions”. Italy bowling world champion and for a while we will talk about us.