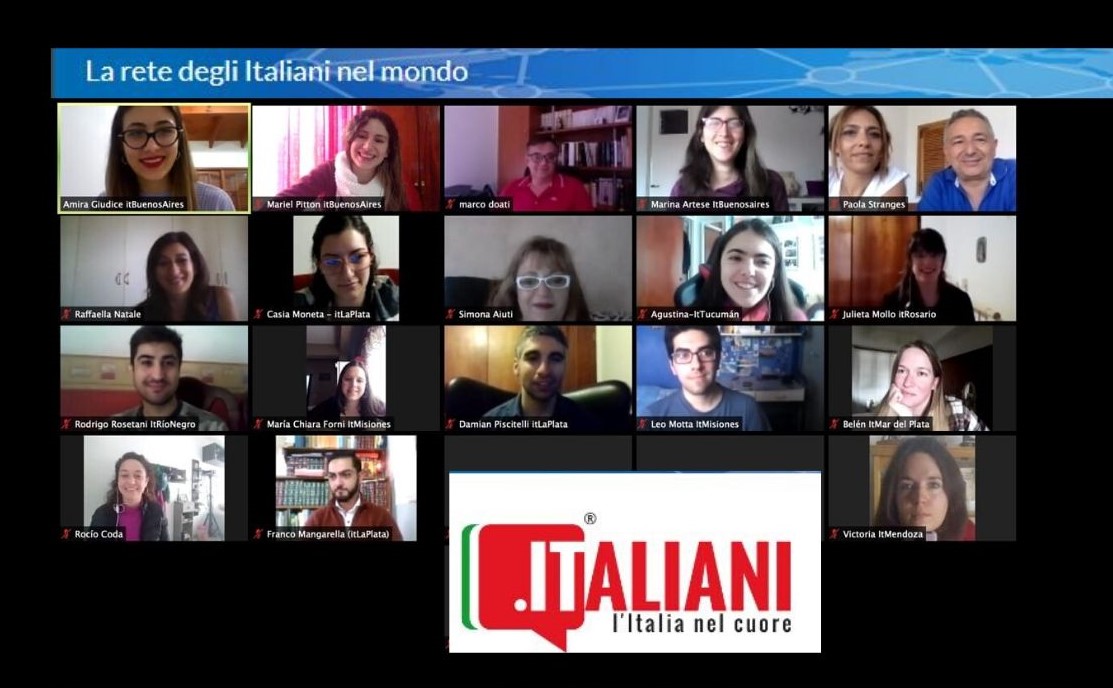 Italians in the world, we had a cup of coffee with South America

We had our first cup of coffee in videoconference organized by italiani.it last Saturday. It’s a series of events of the Italians in the world network. We will meet for a nice and pleasant chat on targeted topics and interest for our emigrants and their descendants. The project is part of the mission of italiani.it which was created with the aim of helping Italians around the world to stay in touch. But also to keep love for the country of origin intact in their hearts.

We met to have a cup of coffee (Italians it was after lunch while on the other side of the ocean it was the first coffee in the morning). Thi momento was dedicated to the Italian community in South America.

Here there is a dense network of bloggers who animate the partner sites of italiani.it. Websites that operate in major cities such as- Buenos Aires, Mar del Plata, Rosario, Misiones, Mendoza, Córdoba, Montevideo and Asunción. Bloggers tell us how Italians live in that country, what they brought from Italy and what cultures, traditions, desires and stories continue to accompany them. The new sites from the cities of Tucumán, Río Negro, La Plata and Corrientes are also ready to be launched. Often they are children or grandchildren of emigrants who will bring Italy forever in their hearts. Sharing a cup of coffee virtually was a moment of reunion and we enjoyed it and had a good time.

Great satisfaction in the eyes of those who set up this international project – italiani.it, the network of Italians in the world – Paola Stranges and Gerardo Ferlaino, and they did it chasing a dream, that of creating this splendid network that crosses borders and connects all Italians all over the world. “I am Italian but I live in Malta – said Paola Stranges – I am an emigrant like you but lucky because I can easily reach Italy. This network allowed me to do everything I wanted to do when I was young. “

The love for Italy remains in the hearts of our emigrants, their children and even more within their grandchildren. All this clearly transpired from the words of young South American bloggers. The boom in enrollments for the Italian language course that the italiani.it Foundation – which will fund 12 scholarships – organized in partnership with the Calabrese Association of Buenos Aires demonstrates it even more. The course is aimed at descendants of Italians (and much more) residing in Latin America who want to learn our language. During the coffee, the coordinator of italiani.it for Latin America, Amira Celeste Giudice, informed that the applications to participate were already more than 2000 in the first 24 hours only. Number destined to grow until registrations close on 30 July.

Focus on citizenship and passions in South America

During this first cup of coffee together there was a great desire to tell and get to know each other. An opportunity to go out enriched and exchange ideas. From Italy Simona Aiuti from itFrosinone underlined the importance of return tourism which can become a driving force for economic growth with an increase in jobs both in Italy and abroad.

Amira Celeste Giudice of itBuenosAires informed how strong the desire for citizenship is among Italian descendants; of the large number of requests at the consulates and also of the difficulty of showing kinship ties with the Italians. Jiulieta Mollo of itRosario thanked italiani.it for giving her the opportunity of this experience. This collaboration allows her, in fact, to cultivate her passion for writing and the Italian culture and language which remains “that of the heart”. Angelo Franchitto of itCassino pointed out that, thanks to the bloggers who write from Italian cities, our emigrants continue to have news from their countries. Furthermore, the traditions they left behind are revived: “With italiani.it we embrace the whole world”.

La Plata and Adria joined by the pipe organ

Very interesting was the intervention by Franco Mangarella who will soon animate itLaPlata website which is on the launch pad. He comes from Tucumán and his grandparents were Sicilian. Franco has always attended Sicilian clubs in Argentina and told how difficult it is to join it if you are not authentically Sicilian.

He spoke of the beauty of human relationships that over the years he managed to build with Calabrians or Sardinians who emigrated to Argentina. Franco is above all a pipe organ concert player. And soon after, the speech by Marco Doati of itAdria. Doati immediately invited Franco Mangarella to come to Adria where, in the cathedral of Saints Peter and Paul, there is a historic organ with 3000 pipes. In the city there is a strong tradition linked to this musical instrument so much so that a school has arisen. Doati proposed to create a common project. This is the essence and beauty of the network of Italians in the world: uniting, creating synergies, holding out hands.

We’ll surely have another cup of coffee together

Finally, there was a quick roundup of greetings from different places in South America: from Buenos Aires, Rio Negro in Patagonia, Misiones, Corrientes, La Plata, Rosario. All united by the strong bond of blood and love with Italy. Coffee therefore becomes a moment of union and above all an opportunity to talk about Italy in Italian. Tell about the country where you live and what you carry in your heart. In the new meeting we will discuss about a specific theme and will also host the bloggers of the main European cities of Italiani.it. Appointment, therefore, to the next coffee.