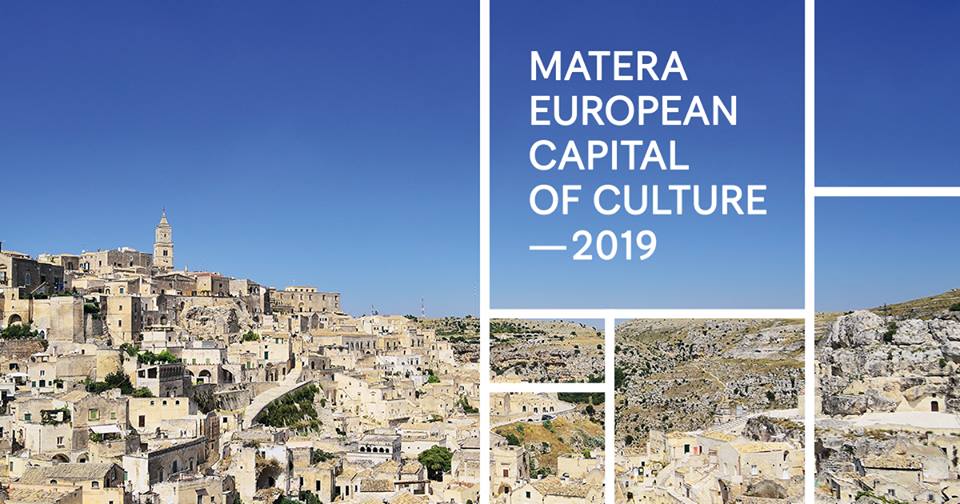 Matera, city of the Sassi, European Capital of Culture 2019

Matera, European Capital of Culture 2019. The ‘City of the Sassi’ is preparing to live an extraordinary year that will start on January 19th, with a rich opening ceremony and events. The organizational machine has been working for a long time to organize a series of events that will turn the spotlight on the city for 48 consecutive weeks. The Sassi and the rock habitat of Matera, in 1993, were recognized by UNESCO as a World Heritage Site. In October 2014, the announcement was made that the city of Lucania would be the European capital of culture together with Plovdiv in Bulgaria: a great recognition for Matera and for the whole of Southern Italy.

Opening the European year of culture will be the bands of the Lucanian municipalities and the bands of European cities that have already hosted the year of culture in the past. All citizens are invited to participate in the inauguration of the Cava del Sole which will be accompanied by symphonies and anthems from all over Europe. The band groups (about two thousand musicians) will play in the city’s neighborhoods alternating moments of music with moments of conviviality.

The city will become a home: all citizens will welcome the gangs and open the doors to homes, schools, parishes, associations. Thanks to the support of Coldiretti, more than 5,000 crapiata dishes will be prepared, one of the typical meals of Matera, to be distributed to the musicians. The President of the Republic, Sergio Mattarella, and the President of the Council, Giuseppe Conte, will attend the opening ceremony. EU Commissioner Tibor Navracsics will also be present. The event will be broadcast live on Rai Uno and will be conducted by the actor Gigi Proietti.

The long night of Matera

The inaugural evening of the European Year of Culture will see Matera ‘lighting up’ in every corner with different moments of entertainment. In Piazza Duomo the moon will rise in the sky and an acrobat fairy will turn on the spectators. The Compagnia dei folli will enchant the thousands of people who will crowd the streets of Matera with grace and poetry.

There will also be Supernova, a show that will illuminate the opening ceremony with an extraordinary performance. On the longest night for Matera, all public places will have the opportunity to animate the city with musical entertainment: DJ sets, live bands, live sets and more. The opening ceremony will thus be embellished with private entertainment initiatives. This will create the atmosphere of full involvement that will give life and life to the Sassi for 48 weeks, full of appointments.

The slogan that the European Union has chosen for Matera is “Open Future” with a special focus on social and cultural inclusion and collaborative innovation. What will you see in Matera in 2019? Everything: shows and cultural initiatives of various kinds along with major exhibitions. Among the exhibition routes to visit there is “Ars Excavandi”, a contemporary look at the history and culture of underground architecture. It is the first of the major exhibitions of the official 2019 program produced with the Basilicata museum complex.

Another exhibition is “Rereading the Renaissance”, a journey into the artistic past of Basilicata and Puglia. You can also visit “Poetry of prime numbers”, an exhibition on the central role of mathematics in the work of artists over the centuries. Among the many events scheduled, Matera will also host the first outdoor performance of the Cavalleria Rusticana opera in collaboration with the Teatro San Carlo. Furthermore, 27 projects have been developed with local creative communities and European partners.

So far there have been about five thousand “passports” sold to attend all the events designed by the Matera-Basilicata Foundation 2019 for the celebrations of the European Year of Culture.

The year will end with a very special initiative: anyone who arrives in Matera is asked to do so by bringing an object to leave in the city, as a memory of his visit. “All the gifts of visitors will be collected in an exhibition that – announced the president and the director of the Foundation, Salvatore Adduce and Paolo Verri – will take place in 2020″.