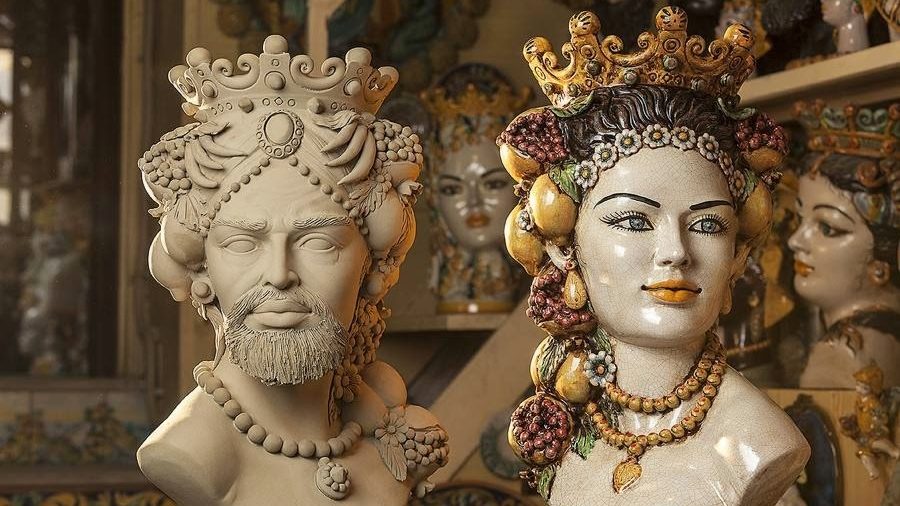 Moor’s heads, the story of a Sicilian brand

How many times have you ever seen the Moor’s Heads! In Sicily there is no tourist who is not fascinated by its colors, by its manufacture. And then there are also increasing the shops of artisans who make them by hand. Then there are different sizes. We decided to tell you something more about their origin when you are in Sicily and you will want to buy one, you will know their story. A tip though: buy both the male head and the female head. There is a tragic love story behind it, so never separate the man from the woman.

Who knows whether it is a legend or a true story. What is certain is that there is a troubled episode behind this custom. It is said that during the domination of the Moors in Sicily, around the year 1000, in the historic district of Kalsa in Palermo, which is called “Al Hàlisah”, an Arab quarter, lived a young girl. She was very beautiful and took care of her balcony plants every day. One day a young Moor felt in love with her . It was love at first sight. The two indulged in passion. But love soon gave way to a terrible truth. The young moor, in fact, had not revealed to the beautiful girl that he had a wife and children in the East. Soon he would have to go back to that place.

The head of a Moor and the revenge of the girl

So the girl, angry at what she considered a betrayal, decided to take revenge. And so one night she took advantage of his sleep and the darkness. She hit him to death, so he would have been hers forever. In fact, she decided that the face of that young man should remain with her forever. So what did the girl do? She cut off the young man’s head and created a sort of vase-like object. And inside she planted some basil.

The head for planting basil, a source of wealth

The girl decided to plant the basil, because it was said that it was a royal plant. It was considered the sovereign herb. So taking care of that plant, she would continue to take care of her beloved. And what happened to that head? It was put together with the other plants on its balcony. Her tears bathed the basil, which grew lush. And it was a plant admired by all those who passed by that road. And so many made themselves realize plants with the same appearance of the Moor, unaware of that terrible secret. In short, a real news story like those that unfortunately happen today. Who knows.

The legend of the beheaded lovers

But there is another story about the origin of these sculptures. It could be said to be less vindictive but still sad and tragic. It is said that a girl of noble origins had lived a clandestine love with a young Arab. But when they were discovered they were both beheaded. And both heads would have been placed, turned into vases, on a balcony, as a warning against any wrong connection. Hence the fact that Moro’s heads are always made in pairs, to remember the tragic fate of the two lovers.

Moor’s heads in Sicilian craftsmanship and in fashion

Moor’s heads or Turk’s heads, are however emblems of Sicily. A lot of the creativity of the artisans, who make them by hand. And there are many tourists who buy them. In Caltagirone they are very well known. In the city that produces ceramics par excellence in Sicily could not miss so many flat balconies of these sculptures. But not just the artisans. Fashion has also consecrated them by making them known beyond the island, creating a true brand. An example is the latest collections by Dolce & Gabbana, who recently chose Sicily, its colors and its landscapes.