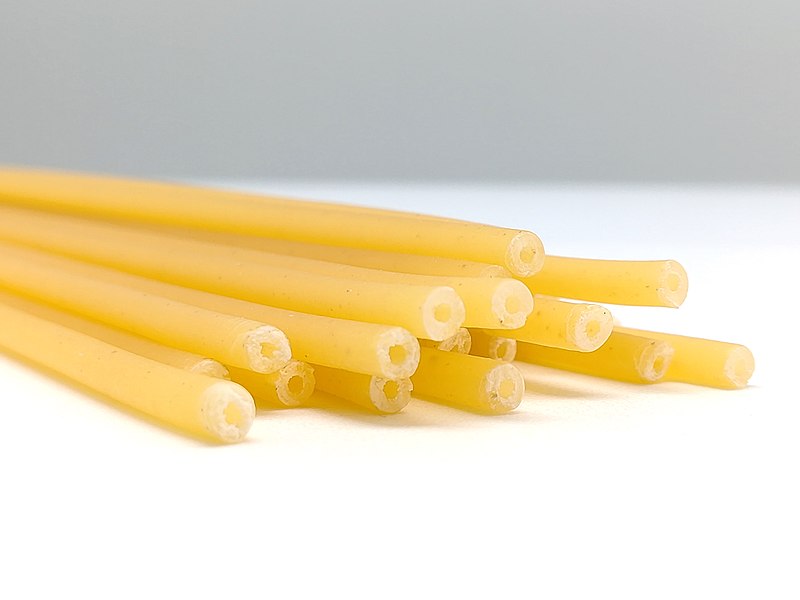 The attention to reduce or eliminate plastic permanently is more and more pressing. It is our own Earth that is asking for it, as it is no longer able to contain the polluting consequences of our lives. And so, between the protests in the squares on Friday and the European directives, the ears opened up to an important voice. But all of us can do something. In fact, there are those who have thought of some small steps forwardas. And Andrea Marangio proposed pasta straws.

It was the period between the fourteenth and fifteenth centuries when testimonies on the recipes that included the use of pasta begun to be collected. In particular, we Italians have endless types of pasta. From macaroni to penne, from vermicelli to spaghetti. But there are two types of pasta that give rise to the others. If on one hand we have the dough obtained from the use of the rolling pin, on the other hand we have the dough worked with the hands. Later, in the sixteenth century, Bartolomeo Scappi gave life to a new kind of pasta, from which the smaller formats useful for soups are derived. Furthermore, the pasta lends itself to countless ways to be cooked. The Roman cacio e pepe excites all palates, pasta with Bolognese sauce takes a long time. Instead the carbonara is rustic and delicious. And now comes another use: pasta straws.

Andrea Marangio: many years of experience and the idea ahead of pasta straws

Eco-sustainable alternatives to avoid plastic waste often represent a huge cost for companies. Nevertheless, it is human morality and foresight for the future to adopt them. And so, Andrea Marangio, a Tuscan barman with an incredible professional experience, had a brilliant idea. Eliminating the doubts on paper straws or the enormous economic cost for those made of metal, gave space to pasta straws. The type of pasta he has chosen is that called zite. Biodegradable, not fragile and also aesthetically beautiful. For the perfect cocktail, pasta straws are born slightly modified compared to normal pasta. Obviously, to adhere perfectly to the functions of a normal straw. And with a few little tricks, you can use them for a cocktail party.

From North to South: pasta straws are famous

The idea of pasta straws is tempting in many ways. In Italy, many have followed the example of Andrea Marangio. For example, the Dum Dum Republic beach in Paestum, eliminated 20 thousand straws in two months, recording surprising results. Always the beach site stood out for its avant-garde ideas, also winning the Fabbrica delle idee 2018 award. In Bologna, however, with the ButtaLaPlastica project, a group of female students convinced bars to replace plastic straws with those of pasta. And all these people who, in their own small way, try to do something will soon be a tide, showing that change is possible. Even if you start with a small pasta tube.