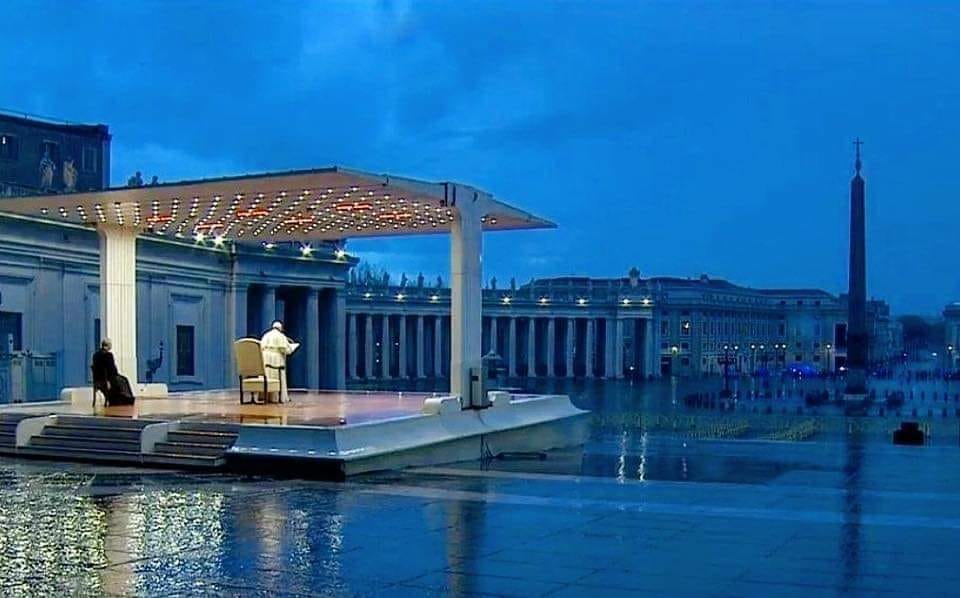 Pope Francis: “No man can save himself from the storm”

Pope Francis prays before the Miraculous Crucifix of San Marcello and the icon of the Salus Populi Romani to invoke the end of the pandemic. The whole world is witnessing a moment of great emotional and spiritual intensity.

A man dressed in white, who moves with difficulty and whose face is marked, prostrates himself at the foot of Christ on the cross to request that the ‘plague’ of the third millennium would end soon. The adoration of the Blessed Sacrament and the Urbi et Orbi blessing takes place in a deserted St. Peter’s Square. The holy place, heart of Christianity, is made even more sad by the cold and rain.

Pope Francis: “Lord, do not abandon us”

With his heartfelt prayer Pope Francis asks God “not to abandon us while we are in rough sea, not to leave us at the mercy of the storm”. The pope who came from the other side of the world bears the suffering of all humanity and presents it at the feet of Christ.
The Successor of Peter prays for the end of the Coronavirus pandemic in a lonely and silent St. Peter’s Square. The Urbi et Orbi blessing is addressed to the world but the people of God is not there! The danger of contagion does not allow the presence of the faithful.

“Afraid and lost in a furious storm”

“It seems it’s been evening for weeks – comments the Pontiff – thick darkness has gathered on our squares, streets and cities. They have taken over our lives filling everything with deafening silence and a distressing void. We found ourselves afraid and lost, taken aback by an unexpected and furious storm. We realized we were on the same boat, so frail and disoriented. But at the same time important and necessary, we are all called to row together and we need to be comforting each other. We are all on this boat. ” Pope Bergoglio urges everyone to “change course and return to God and true values, first of all solidarity, because we thought we would always remain healthy in a sick world, plagued by wars and planetary injustices. Instead we realized that we cannot go on each one individually. But only together. No man can save himself”.

Make sense of the time we live

“The Lord challenges us and, in the midst of our storm, invites us to awaken and activate solidarity and hope capable of giving solidity, support and meaning to these hours when everything seems to be shipwrecked. Embracing his cross – urges the Pope – means finding the courage to embrace all the contrarieties of the present time. Leaving for a moment our anxiety about omnipotence and possession to give space to the creativity that only the Spirit can arouse. Embracing the cross means finding the courage to open spaces where everyone can feel called. It means allowing new forms of hospitality, fraternity and solidarity ”.

The moment of prayer and reflection is also an occasion for the faithful to gain the plenary indulgence. This too is an extraordinary opportunity desired by Pope Francis who in his prayer does not forget who is facing the tough battle against the pandemic ‘in the trenches’.

Health workers, police, workers who are guaranteeing essential services for the good of the community. The prayer rises in the square of St. Peter’s Basilica also and above all for them. Francis, clearly worn out after the great tribulation to which the whole world is subjected, he does not hesitate to invoke divine mercy. He entrusts humanity on the mercy of God, heartfelt calls for the end of an epidemic that is reaping thousands of victims from all over the world. In a spooky St. Peter’s Square, Pope Bergoglio shakes the consciences of all, even of agnostics and atheists. That moment that will remain carved in the history of all humanity.