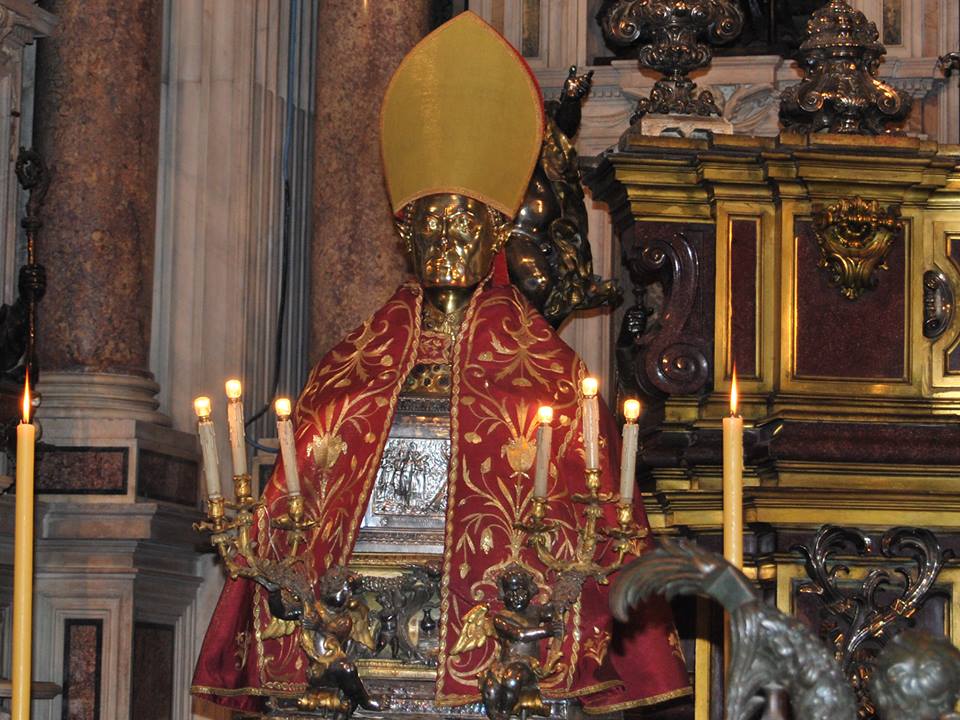 San Gennaro, patron saint of Naples, loved by the people

Naples is celebrating for its beloved San Gennaro, protector and patron of the city, which the Church remembers every year on September 19th. The love of the Neapolitans for the venerated saint is visceral, an ancient cult that has secular roots.

According to historians the term Ianuarius would be the real name of San Gennaro; his family, a descendant of the Roman gentry Gens Januaria, sacred to Giano two-faced god, moved from Rome to Campania. Still according to historical sources, Gennaro was born in 272 but there are no certainties about his birthplace. There are those who say that he was born in Benevento, where he later became a bishop, some say he was born in Naples.

His family also has no definite information: according to some he would have been born poor and motherless. Due to the extreme poverty of the family, his father sent him as a child to work as a pig guardian. At this juncture, he meets an ascetic monk and understands that he is the right man who can help him in his education. Further information on the life of San Gennaro can be found in the Bolognese Acts and in the Vatican Acts.

In the fourth century, during the persecution of the Christians by the Emperor Diocletian, Gennaro who is bishop of Benevento visits the faithful in Pozzuoli. Dragonzio, then governor of Campania, ordered Gennaro and his Christian followers be beheaded. Near the Forum Vulcani, the current solfatara of Pozzuoli, Gennaro is thus beheaded in the year 305.

The body of San Gennaro was buried in the Neapolitan catacombs of Capodimonte, after having remained for a little over 100 years in another place: the Agro Marciano. In the catacombs the popular veneration of the bones of the saint begins, which over the years becomes in fact the protector of the city.

San Gennaro and the relics kept in the cathedral of Naples

For 325 years the bones of the saint remain in Benevento, to then be transported to the safe shelter of the Sanctuary of Montevergine where, since then, the icon of “Mamma Schiavona” was venerated. In 1480, the relics of San Gennaro are found in the Sanctuary of Montevergine under the high altar, thanks to Cardinal Giovanni of Aragon. Some years later, in 1497, the relics of the beloved saint finally return to Naples thanks to the Carafa family.

Cardinal Oliviero Carafa, to properly host the remains of San Gennaro, had a crypt in the Renaissance style built in the cathedral of Naples: the Succorpo Chapel. In Naples, the domination of the Normans, Swabians and Angevins followed, but the cult of San Gennaro became increasingly strong and rooted especially among the people. King Charles II of Anjou had the gold and silver bust built to hold the bones of the skull. The display case, in silver, in which the cruets with blood are preserved, is commissioned by the sovereign Roberto of Anjou .

The miracle of blood

In the cathedral of Naples are kept the bones and also two very ancient ampules containing the presumed blood of the saint. According to the narration in the annals, the precious liquid was collected by a woman named Eusebia immediately after the martyrdom of San Gennaro. The ampoules are exposed to the veneration of the faithful three times a year: the Saturday before the first Sunday of May, September 19 and December 16.

These are three important dates that are now part of the most authentic and genuine expression of Neapolitan popular piety. Often, when the ampoules are exposed, we are witnessing the phenomenon of liquefaction of the blood of the saint. An event considered by the faithful a true miracle. The first liquefaction of blood, according to historians, takes place in August 1839. The Chronicon Siculum tells that during the festivities for the feast of the Assumption, the ampoules containing the blood of the saint were displayed. Suddenly solid blood becomes liquid, causing great wonder among the religious and among the people of God. Over the centuries the “miracle” has always repeated itself.

When the liquefaction did not occur, due to popular belief it was a fatal sign for the fate of the people and the city. Again according to popular belief, even if liquefaction is too rapid, it is not a good sign. Generally the blood melts in the presence of many faithful gathered in the cathedral and gathered in prayer. The “miraculous liquefaction” is generally greeted by the waving of a white handkerchief and the thunderous applause of the Neapolitans, more and more devoted to their beloved saint.

After many years the illuminations return to Naples for the party in honor of the most venerated patron. For eight days, Via Duomo is illuminated to coincide with the celebrations in honor of San Gennaro. That of the illuminations is an ancient tradition that had been lost over time. The last time the city was illuminated on the feast of the saint, it was before the great bombing during the Second World War.

This year, Cardinal Crescenzio Sepe asked the city to do more for the party dedicated to the beloved patron. His appeal was accepted by the Chamber of Commerce of Naples who had the lights installed on the streets, financing the whole initiative. Definitely a good news for the whole city and for the tourists who in these days have been able to admire, in the evening, a festive and wonderfully illuminated Naples.