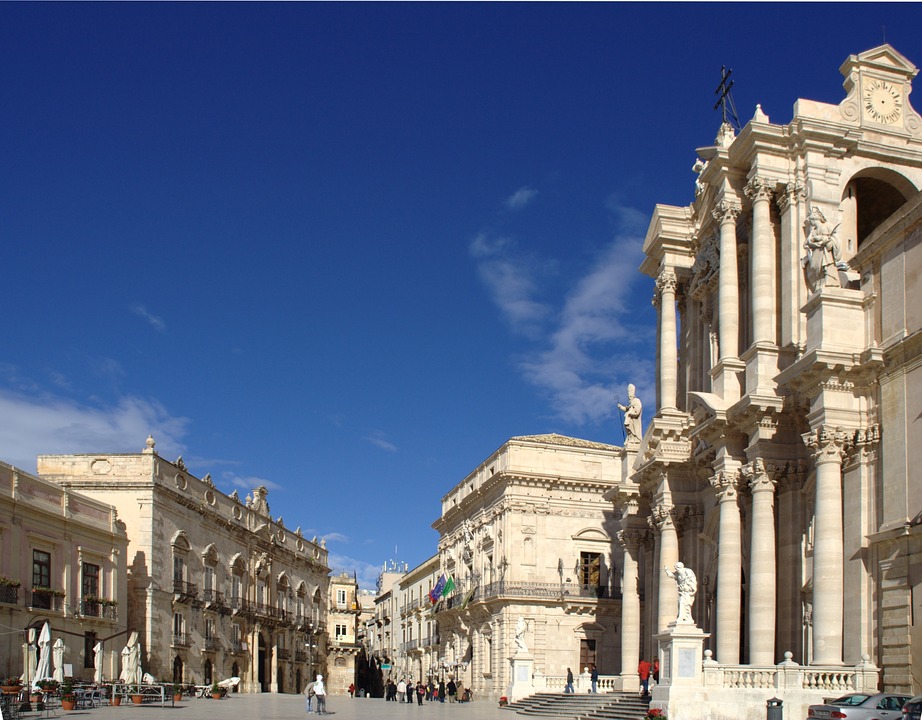 Syracuse, one of the oldest cities in the Mediterranean

Syracuse in ancient times was the most important city in the western world; can be seen with a glance from his “Archaeological Park”. There are so many things to see: the Greek Theater, the Ear of Dionysus, the Roman Amphitheater, and many other monuments. The Greek Theater is undoubtedly the most spectacular monument in the city, as well as one of the largest and best preserved Greek auditoriums. It was built in the rock with a semicircular shape, but over the centuries, it has undergone several changes.

Not far from the theater there is a small road that leads to the latomie, ancient stone quarries that were also used as granaries. However, the most well-known goal was that of prison; the latomia del Paradiso is the most interesting, also for the artificial cave 23 meters high and 65 long called “Orecchio di Dionisio“. The name derives from Caravaggio, who stayed briefly in Syracuse. We also see the elliptical Roman Amphitheater, with its monumental appearance, dating back to the 3rd century; one of the largest in the world. The entrance ticket to the park costs € 10 but visiting it with the archaeological museum or Palazzo Bellomo in Ortigia, is € 13.50. The first Sunday of each month entry is free.

The catacombs and the basilica

Also interesting are the Catacombs of San Giovanni. The catacombs that can be visited are those under the Basilica of San Giovanni. These catacombs were sought after because there was the tomb of San Marciano, the first bishop of the city. The catacombs can only be visited by taking part in a guided tour for € 8. Archeology enthusiasts can visit the Museo Archeologico Regionale Paolo Orsi, the largest archaeological museum in Sicily and one of the most important in Europe. The Sanctuary of the Madonna delle Lacrime is also enchanting, which can be seen from almost anywhere in the city.

The Basilica of Santa Lucia is very popular, buried inside the sepulchral temple, depicted in a statue; which seems to have “sweated” during the Spanish siege of the city as a message of solidarity with Ortigia, the ancient nucleus of Syracuse. Ortigia is a 1 kilometer long island just 500 meters wide where it is concentrated in which over 3,000 years of history are preserved. We continue with the Temple of Apollo, the oldest in Doric style in the area. Over the centuries the temple has undergone various transformations and adaptations.

The temple was a Christian church in the Byzantine era, an Arab mosque with the Muslims and a barracks during the Spanish domination. We also see the most beautiful square in Ortigia, and in all of Syracuse, or piazza Duomo. Here is the Baroque law. You can visit the Cathedral of the Nativity of Mary Most Holy every day from 10am to 6.30pm. Next to the Cathedral, on the corner with Piazza Minerva is the Syracuse Town Hall, a palace built between 1629 and 1633.

Church dedicated to the patron saint of Syracuse

Another attraction not to be missed in the square is the church of Santa Lucia alla Badia, dedicated to the patron saint of the city. It has a beautiful and slender façade, and inside is the stronghold of the church, the “Burial of Santa Lucia di Caravaggio”. The Piazza Duomo hypogeum is also interesting; an underground path rediscovered in 1869, consisting of a main gallery that connects Piazza Duomo with the Forum.

How to get to Syracuse

Then again we see Palazzo Bellomo, which houses a small but valuable museum where the lion is played by Antonello da Messina’s The Annunciation. The castle was very beautiful, built by Frederick II in the 13th century, built on the ruins of ancient fortifications. A visit to the Fonte Aretusa is fundamental, a semi-circular pond a few meters from the sea, fed by a freshwater spring where papyrus plants grow and many small fish swim.
The nearest airport is in Catania from where there are frequent buses that arrive in Syracuse in an hour and 15 minutes.