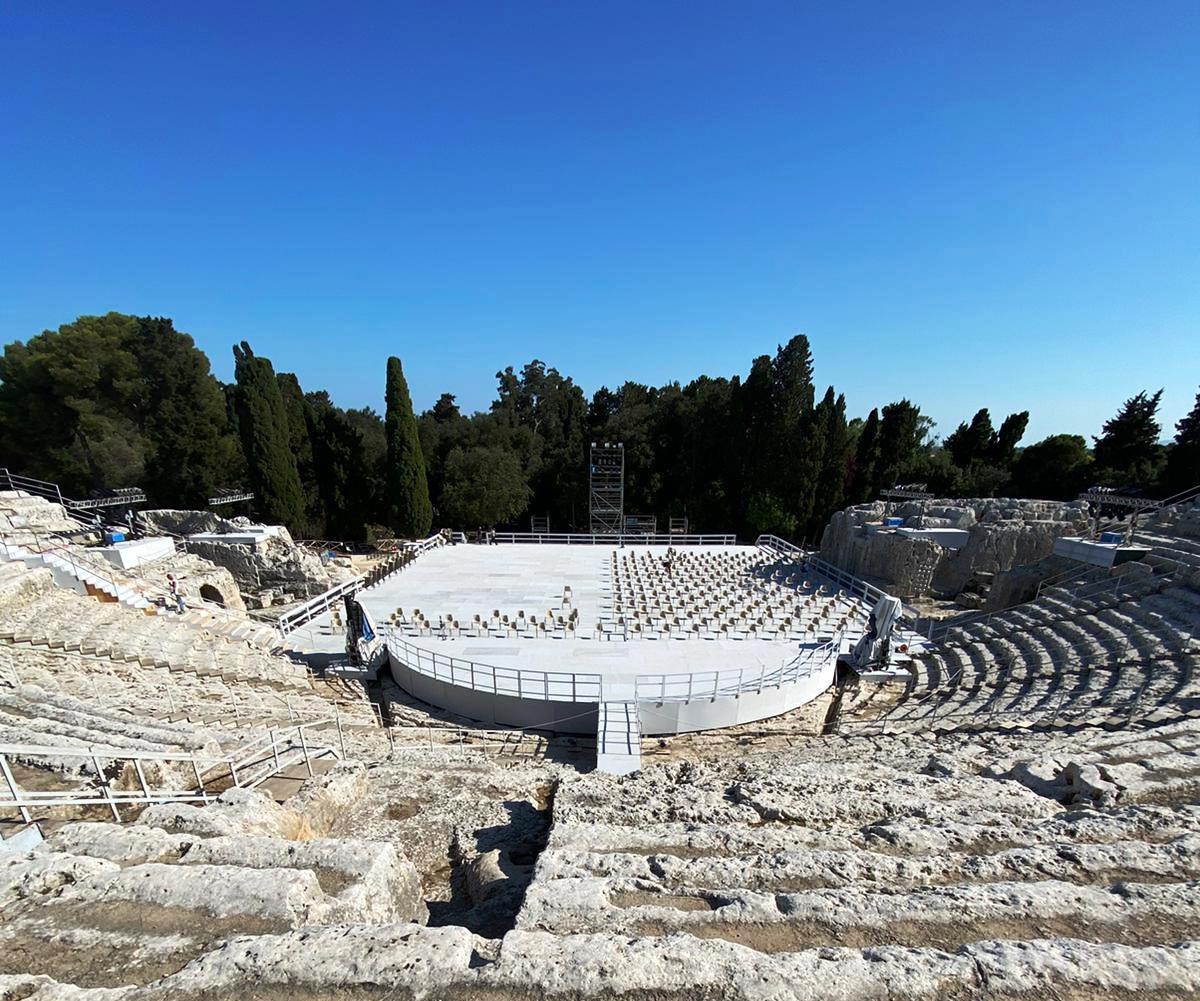 The historic theater of Syracuse reopens: here are the plays scheduled

The Oscar winner Nicola Piovani will “restore the light” of the Greek Theater of Syracuse. A project conceived by the Inda Foundation to restart the theater at the time of Covid-19 debuts on Friday evening, 10 July. The season of classical performances scheduled for 2020 has been postponed to next year. Instead, “Inda for solo voices” theather season has been conceived. Everything changes but the magic of the theater always remains the same. But from Friday at the Greek theater the number of spectators will not be the same, approximately 5 thousand spectators used to attend the performances in the past.

There will only be 480 seats. But the real news is that spectators will sit on the stage while the auditorium will serve as scenography. All the plays will be premiered with the artists who will measure up to the classical tradition, through texts inspired by the figures of ancient theater, and reworked by twentieth century authors.

“Inda for solo voices”, a project with big names in Italian theater: the opening with Piovani

The debut will then be with Maestro Nicola Piovani who will present the rewriting of “L’Isola della Luce”, starting at 8.30pm. It is a cantata for soloists, choir and orchestra, on verses by Vincenzo Cerami: the topic is that of the birth of Apollo, bearer of light. In reply on Saturday evening. Piovani will conduct 20 instrumentalists and 12 choristers. The show is produced by Inda, in collaboration with the Vincenzo Bellini Conservatory of Catania and filmed by Rai. On stage there will be Tosca, Massimo Popolizio and the soprano Maria Rita Combattelli.

The other “solo voices” that will resonate on the ancient auditorium

“Inda for solo voices” project will continue on Friday, July 17 with the actress Lunetta Savino on stage with “Da Medea a Medea” by Euripides, translation and adaptation by Margherita Rubino and Antonio Tarantino. The music will be performed live by the composer and pianist Rita Marcotulli. Supervised direction by Fabrizio Arcuri.

And then on July 25, Lella Costa with “La vedova Socrate” directed by Stefania Bonfadelli, a tribute to Franca Valeri who turns 100 on July 31 and who has written, directed and interpreted her play since 2003. Luigi Lo Cascio will present at the Greek theater “Aiace” by Ghiannis Ritsos on Saturday, August 1st. Live music by G.U.P. Alcaro. The dramas of Phaedra, Antigone, Clitemnestra and Lena will be interpreted on Saturday, August 8 by Laura Morante from the text “Fuochi” by Marguerite Yourcenar. The musicians Rodrigo D’Erasmo (Afterhours) and Roberto Angelini will be with her. Supervised direction by Fabrizio Arcuri.

On stage, on August 22, Isabella Ragonese with “Crisotemi” by Ghiannis Ritsos, in a dialogue with the live music of Teho Teardo, Giovanna Famulari and Laura Bisceglia will play the cello. Supervised direction by Fabrizio Arcuri. The artist Mircea Cantor, Duchamp Award 2011, will close the “Inda for solo voices” project with “The Sound of my Body is the Memory of my Presence” on August 30th. It is a site-specific performance with the participation of the students of the Academy of Ancient Drama, a ritual with a strong symbolic impact to celebrate the return to life.

After Mircea Cantor’s performance, Lucia Lavia, Anna Della Rosa and Galatea Ranzi will announce the next season. Some songs from “Baccanti”, “Ifigenia in Tauride” and “Le Nuvole”, the three shows that were initially scheduled this year, are scheduled for next year. The evening will also include Piera Degli Esposti’s extraordinary participation in videos. Finally, Eva Cantarella will be given the Eschilo d’oro Lifetime Achievement Award.

The plays will be free live streaming

To cope with this period of emergency, Inda project also takes on a symbolic value: the possibility of rediscovering the magic of theater for all those who love it. But since few will be able to access the theater, a digital partnership agreement has been made with TIM: plays on stage can be followed free of charge all over the world in streaming, both direct and delayed in the seven days following the performance. Just log on to the website www.indafondazione.org. In addition, to support Inda in this difficult year you can make a donation of 1000 euros, becoming a 2020 Patron. So you can attend the shows or give the ticket to another spectator.

The photographs were granted by the Inda Foundation press office