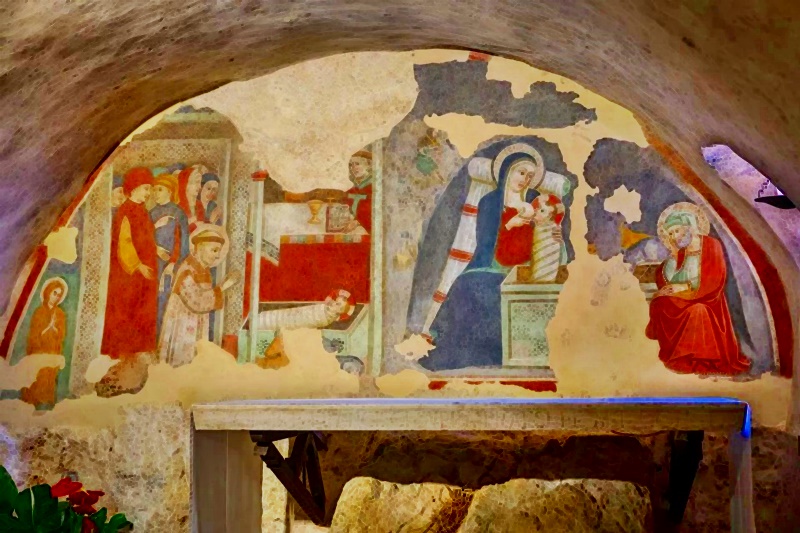 The Nativity scene of San Francesco has always been linked to tenderness and romantic memories tied to childhood.

And this does not differ from the legend that San Francesco wants to recreate a mystical and spiritual atmosphere at the same time.

The Nativity scene of San Francesco

The nativity scene, understood as we see it today in so many houses, with hut or cave, made of poor material, was born by the will of the poor man of Assisi. It was 1209 when Saint Francis went to Greccio for the first time, where he had managed to end serious calamities. The country among other things had suffered terrible assaults from wolves. In this Apennine locality, he had built a hut on Monte Lacerone, called precisely of San Francesco. Later a chapel was built there in 1712.

From 1217, the noble Giovanni Velita of Greccio became a good friend of St. Francis, and asked him to approach the city to preach to the people. In these places the desire to recall the birth of Jesus was born in the saint. Probably this desire matured after 1223, after the journey made in Palestine. It seemed to him that Greccio remembered Bethlehem.

Pietro Di Bernardone’s son, who became poor, expressed the desire to celebrate Christmas night in those places. Francis recalled the birth of Jesus, organizing the first living nativity scene. According to the stories, a miracle was performed during Mass. Saint Francis then commissioned Giovanni Velita to choose a cave, where he would build a manger, and lead an ox and a donkey. Francis, in memory of the Christmas of Christ, ordered that the first crib made of rags be assembled. He wished he would bring hay, an ox and a donkey and a doll made of patches.
The saint preached about the nativity of the “poor King”, and, while he prayed and contemplated the nativity, something happened. The knight saw the Baby Jesus in place of the one the saint had brought, and he was moving and coming to life. So it all happened during the Christmas night of 1223 in Greccio, today the province of Rieti.

A child of flesh and blood would appeared, and Francesco would picked him up. From this episode originated the tradition of the crib spread all over the world today. The scene is recalled by Giotto in a well-known painting, which however puts the scene in the presbytery, which recalls the lower Basilica of Assisi. The scene, as well as one of the most famous, is an extraordinary document of the time.

Spectator observes from the part usually reserved to priests, where the characteristics of the environment are represented with meticulousness and vivacity. A crowd of people attends the scene, and in the foreground is Saint Francis with the Holy Child in his hands. In Greccio the tradition and the memory of the poor man of Assisi and the rag doll have never been lost. That pile of rags really came alive with wonder. Today in Greccio the holy tradition is still alive.

The nativity scene of San Francesco recalled in Greccio

Since 1972 a living nativity scene has been set up by the Pro Loco of the small town in the province of Rieti. Some of the dialogues have been extrapolated from the texts of the first biographer of San Francesco, Tommaso Celano. The representation is divided into six living pictures, in which every peculiarity is treated in detail. Everything is coherent at the time in a meticulous way, from the costumes of the 1200s, which come from the Rome Opera House. Even the scenographies are very accurate, full of spirituality and enchantment, between places touched by the divine. The religious re-enactment of the first nativity scene in history is not only a reason for pride for Greccio, but also a moment of cohesion among the villagers. Every year it is an unmissable event and a truly unique show in the world.