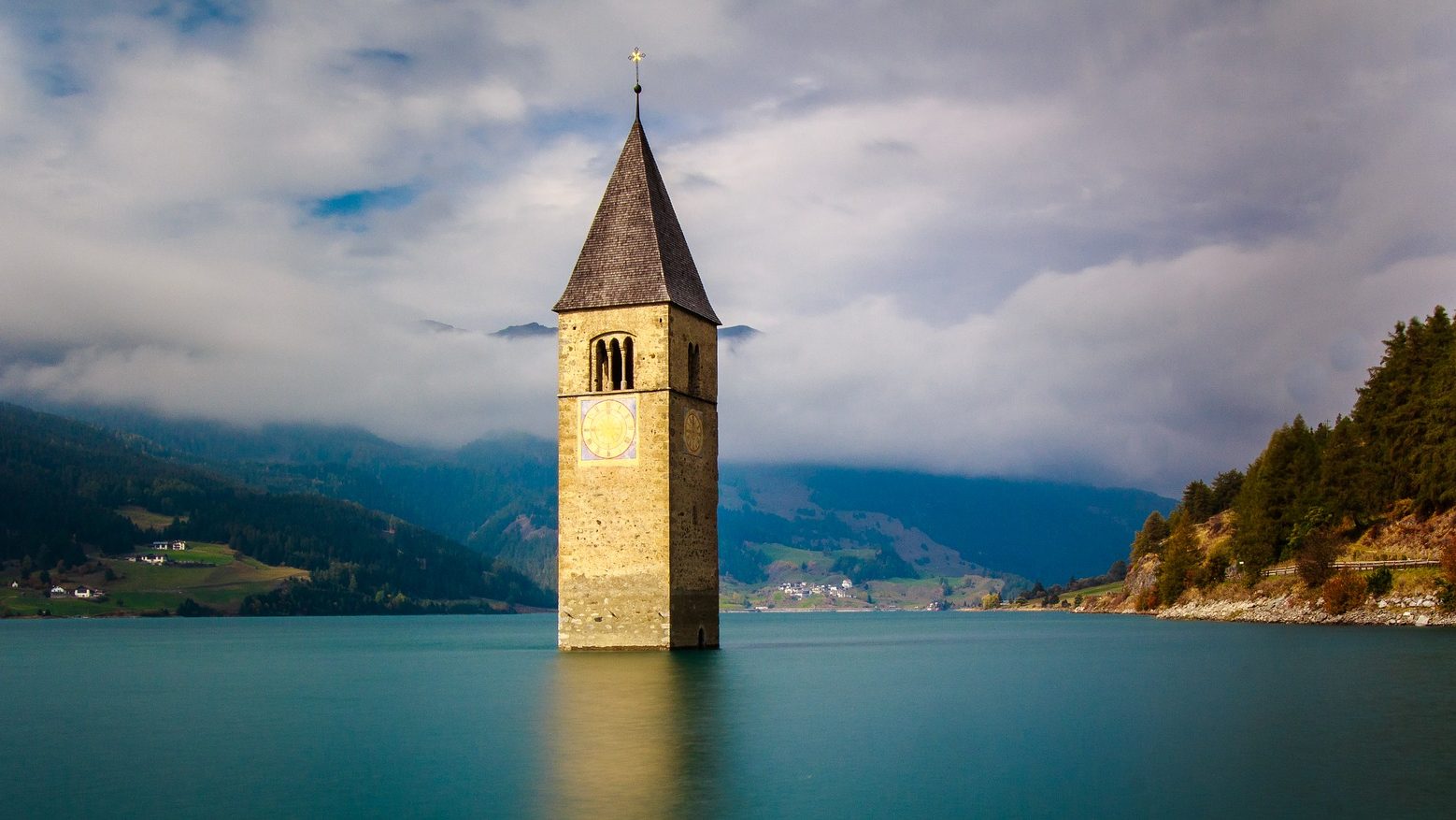 It peeps out from the water, rising to the sky. It peeks curiously around it from the arches of its belfry. And it is located in Val Venosta and is totally surrounded by the blue of the Resia lake. It is the submerged bell tower which, in its solitude, attracts the admired glances of numerous tourists. So unique that the German travel magazine Geo has counted it among the 15 places that seem to come out of a fairy tale. But its story is not pink and flowers.

If the view of the bell tower leaves us astonished, arousing a feeling between the curious and the amused, the spirit that explains its origin is different. The story that leads the bell tower to acquire today’s appearance is not at all happy. It was 1950 when the construction of a new dam for electricity production was completed. A project repeatedly abandoned and taken up that sees its beginnings already at the end of the 1800s. Objective the creation of an artificial basin that should have taken place in full respect of the surrounding villages. Yet things went differently.

In 1920 the raising of the water level to 5 meters was approved. Then, in 1939, the state decided to build a dam that would allow water stagnation up to 22 meters. Clear that the inhabitants of the common neighbors of Curon and Resia did not digest the thing and tried in every way to oppose it. Even the parish priest of the village came to the front and even asked for the support of the then Pope Pius XIII. Every effort was in vain. In 1947 work began which, after three years, marked the end for the nearby settlements. The arrest of the sluices caused the rising of the waters. The surrounding countries remained flooded. “Water rises fearfully”. With these words, published in the 1950 newspaper, an inhabitant took leave of Curon Vecchia.

What remains today of the submerged bell tower?

How to solve the disastrous situation caused by the “ingenuity” of man? Immediately after the damage, which saw 677 hectares of land devoured by water, the population was evacuated. Arranged in temporary barracks, at the beginning of the Vallelunga, the former inhabitants watched in disbelief at the loss of their most precious things. Houses, fields and farms. All wiped out. A real theft of the existence of these people of which half felt forced to emigrate. Among the buildings literally eaten by the dam, there are also assets of social interest. The church is an example. Today we see only the submerged bell tower. Built during the 14th century, it displays a Romanesque style. Next to it was the nineteenth-century church of which no trace remains. It must in fact be said that all the buildings incorporated by water no longer exist. A large explosion cleaned the bottom of the lake in the summer of 1950.

Therefore the bell tower should not at all stimulate admired and happy feelings. On the contrary it should be looked at for its solitary appearance. Nostalgic witness of what was there. However, the emotional charge remains, whatever it may be, which moves the many tourists visiting the area. An effect extended by seasonality. In summer the bell tower “comes alive” thanks to the many surfers and sailors who fill the waters and the sky with swollen and colorful sails. During the winter the bell tower turns into something magical. Thanks to the snow-covered landscape, the lake becomes white giving greater uniqueness to the only “inhabitant” of the place. The bell tower submerged in a soft white blanket. And legends flourish as usual. Among these, the one that tells the possibility of hearing, on particular days of the year, the ringing of bells. As if it were the voice of the bell tower that echoes from time ago to still tell us the unusual story.