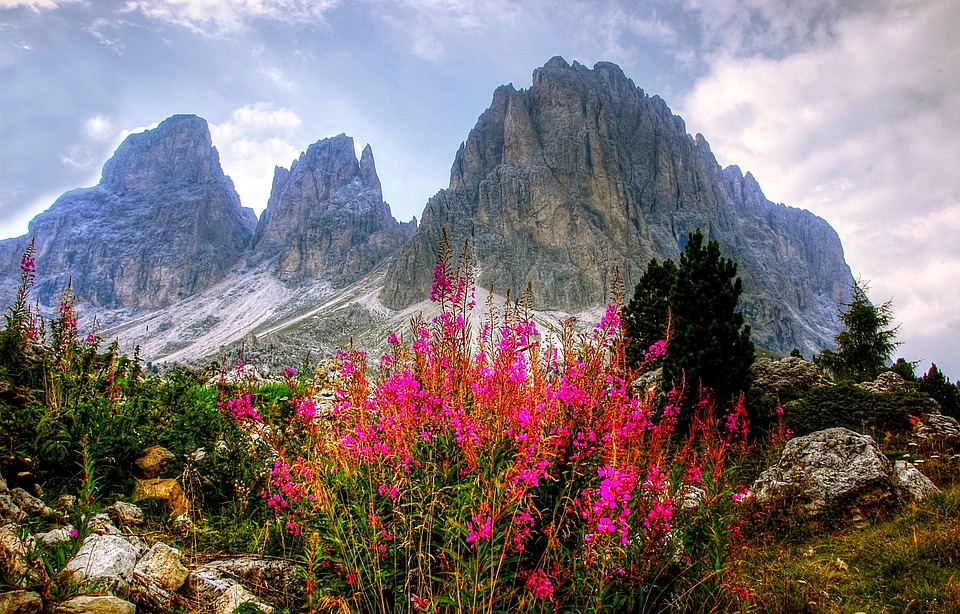 Val Gardena covers about 25 km in the northwestern part of the Dolomites, in Alto Adige. The territory goes from Ponte Gardena, rising up to the Sella Group, with the Sella and Gardena Passes.

The area of Trentino today lives a great “touristic breath”, starting from Pontives, where we actually find the linguistic border between German and the Ladin language. It is in this area that the Ladin valley opens up exactly.

Val Gardena, presents archaeological finds that indicate life forms in a remote era. Some of the interesting findings, found in Val Gardena, and precisely at “Plan de Frea” date back to the primitive age. Archaeologists frame them around the year 6000 BC; these are arrowheads, needles and many other tools, and prehistoric findings found throughout the Dolomites of Trentino Alto Adige. Probably it is a vestige of ancient hunters, who in the summer sought shelter under the huge rock near “Plan de Frea”.

The hypothesis is plausible, since in the most rigid months, a fixed stay would have been very difficult. Later findings on the “Col de Flam”, near Ortisei, relate to bronze buckles, jewels, iron axes, Gallic sabers and primitive rural tools. These finds date back to 400 BC, so we see a gap of five thousand years. Instead, the first documents on Val Gardena date back to the year 999.

In Val Gardena from sculpture to trekking

That year, Count Otto von Andechs handed over to the bishop Gotschalk, the “Forestum ad Gredine“, which is the woodland of Val Gardena. Impressive vestiges of the 2000-year history of the valley can be found everywhere: “Benunìte Gherdeina!” Thus greet the inhabitants of the place; defending their ancient language. Over time, local tradition developed craftsmanship in the mastery of sculpture, transforming craftsmanship into art.

What once served to round up a meager salary, today is an art appreciated internationally; a very important source of income together with tourism for Trentino! Particularly valuable works are exhibited in the Val Gardena Heritage Museum in Ortisei. Here is a permanent exhibition dedicated to Luis Trenker; the climber, architect and director, who lived the mountain as an adventure. This beautiful valley, once difficult to access, is today a destination for skiers and nature lovers who prefer hiking, trekking and climbing.

Trentino Alto Adige has a unique charm; the peaks of the giants of the surrounding Dolomites, which attract visitors and sportsmen with unique views. Jagged peaks follow each other in blocks of rock that adorn the Val Gardena in its entire length, from Ponte Gardena to the Sella Group. Dense conifer forests stretch out over the slopes like a regenerating green carpet.

Trentino has always had a great skiing vocation, in fact, when spring comes, at the foot of the Sassolungo, the Sella and the Odle you can still ski under the sun. Lower down you can enjoy the crocus flowering in Vallunga. A short break, and now the lifts are ready to re-open for the summer season! The Adige Valley, as beautiful as few, attracts thousands of tourists every year, as Garda Lake does, and the magnificent medieval castles.

Nature lovers are attracted in Trentino Alto Adige by the majestic oaks, chestnuts, spruce, larch and birch trees. It is not uncommon to see roe deer, and ibexes, which had become extinct and then reintroduced into the Stelvio National Park.

Until the sixties, deer were also encountered, while the marmot lives between 2000 and 3000 m. In the pre-Alpine region there are many gray hares. Therefore, those wishing to visit the Stelvio National Park, established in 1935, will not be disappointed.