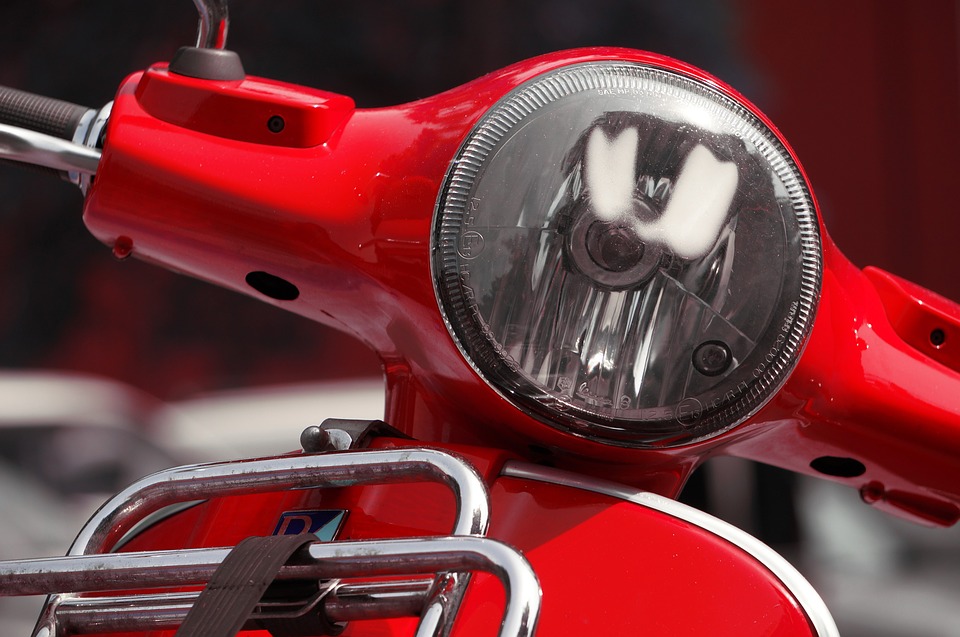 Vespa “spreads its wings” officially buzzing through the Italian streets on April 23, 1946, when Enrico Piaggio registered the patent. Thus a scooter is born that will change not only the habits of Italians, but that will go beyond our own borders.

Until then, Piaggio had dealt with something completely different. Founded in 1884 by Rinaldo Piaggio and his father in Sestri Ponente, it initially produced naval furniture and railway equipment. In 1915 it entered the aeronautics sector and in 1924 it began producing the first Jupiter engines and Dornier Wal aircraft.

Then it moved on to the construction of airplanes with which it conquered many records in the 1920s and 1930s. In those years the Piaggio technical staff directed by Corradino d’Ascanio developed and produced the DAT 3, the first helicopter in history. In the beginning the name of the scooter had to be “Donald Duck“. Perhaps Vespa is the acronym “Cheap Vehicles,  public limited company“. An other hypothesis on the name derives from Enrico Piaggio who, hearing the engine, has compared it to the buzz of a wasp. In any case, the scooter with 98 cubic centimeters, three gears, 3.2 horsepower, 60 km per hour, immediately had an incredible success.

After filing the patent, within months the Pontedera factories produced 2,500 scooters. The following year sales exceeded ten thousand pieces. The Vespa cost sixty-eight thousand lire, almost a year’s salary, yet paying it in installments was affordable.

Italian roads were populated by pilots with wife or girlfriend on the rear seat for the Sunday trip. The Vespa with a sidecar was born, with a cart, and then the “Ape” that still runs around Italy. Piaggio also produced the ACMA model for France between 1958 and 1964; ancestor of city cars. In 1955, France always asked the Piaggio for a scooter for the parachutists engaged in the Indochina war. Vespa riders soon became protagonists of important rallies, worldwide. The most famous was “Eurovespa”, forty editions, the last of which in 2006 in Turin to coincide with the 60th birthday of the Vespa.

A made in Italy scooter

There were 3,500 regular members, more than 4,500 non-members for a total of 8,000 copies present in the Stupinigi fashion show. Vespa riders came from all over Europe but also from the United States, Canada, Argentina, Algeria, South Africa and Taiwan. The following year the event turned into Vespa World Days and at the 2007 edition in San Marino over 5 thousand scooters paraded.

In short, Vespa is a timeless myth. It is now celebrated as one of the most famous industrial patents in the world and a symbol of Italian design; also entering museums, as in the Triennale Design Museum of Milan and at the MoMA in New York. However, the most romantic memory of the Vespa is in 1953 with the film “Vacanze Romane” with Gregory Peck and Audrey Hepburn. That was the true consecration, with the scene then passed to the history of cinema. Vespa becomes a carefree, youth and freedom symbol.

The two actors riding the scooter also ended up in the movie posters, with the Piaggio brand on display. The film acted as a flywheel, and it was not the only film. Vespa again acted in the “Quadrophenia” a 1979 English film set in the London of the early Sixties when the Mods went crazy in the streets.

There were lots of bikers riding Vespas or Lambrettas. Vespa is once again the protagonist in the film “The talent of Mr. Ripley“, “American Pie”, “The Interpreter” and in music with Cesare Cremonini. However, it remains in the history of Cinema, in beautiful black and white photos, in which Charlton Heston and Stephen Boyd riding a 1959 VNA1T; in stage costumes, they speed by on a Vespa to move to Cinecittà during the filming of Ben-Hur.