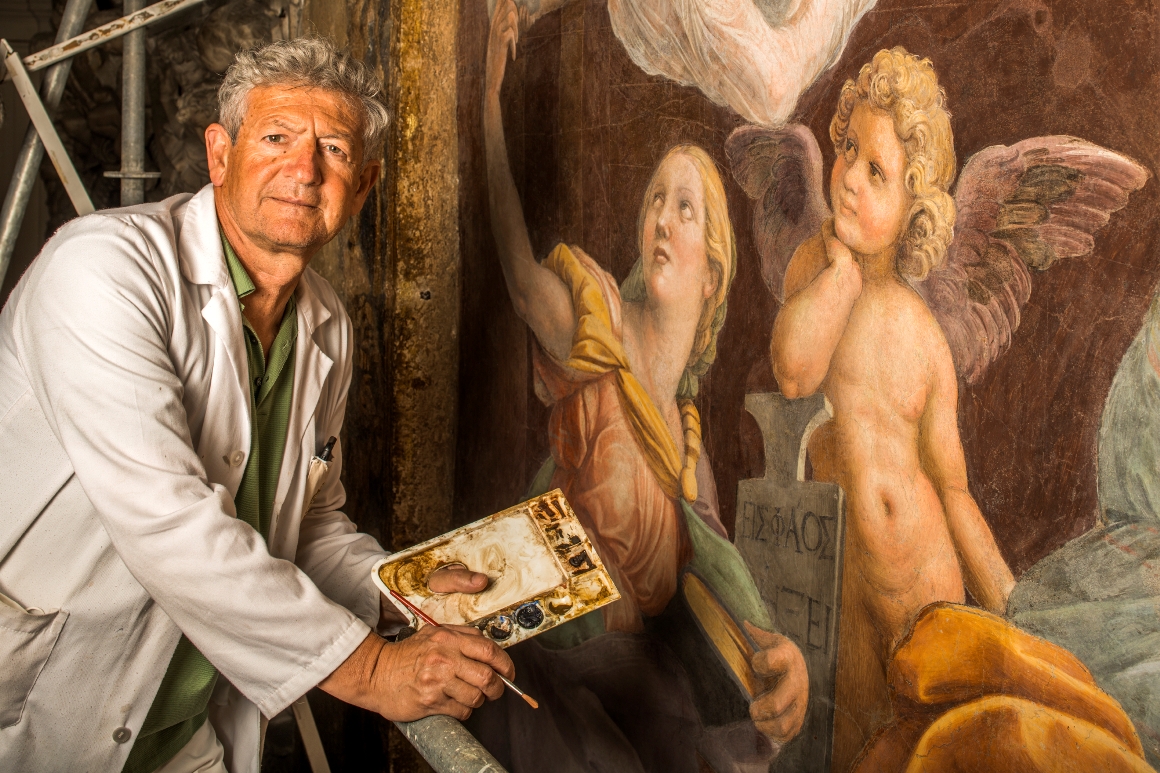 Antonio Forcellino, architect, writer and restorer, is considered one of the greatest experts of the Italian Renaissance. Together with his team, he recently completed the important restoration of the fresco by Raffaello Sanzio “Sibyls and angels”, preserved in the Chigi chapel of the church of Santa Maria della Pace, in Rome. The work, on which he worked together with Oliva Muratore, Emanuela Settimi and Maria Milazzi of the Special Superintendency of Archeology, Fine Arts and Landscape of Rome, was created during the celebrations for the 500th anniversary of Raphael‘s death.

It was an extraordinary job made possible thanks to the support of Lottomatica, always committed to the protection of the Italian artistic heritage: from the Tomb of Julius II in San Pietro in Vincoli in Rome, to the Medici Chapels in Florence. Of this excellent result, the president and CEO of Lottomatica Holding, Fabio Cairoli, said: “The Italian artistic heritage needs to be preserved and enhanced. We are proud to have contributed to the restoration of this important work alongside the institutions, in safeguarding and supporting art and culture”.

Antonio Forcellino: the details of the fresco

The sublime art of Raffaello Sanzio (Urbino 1483 – Rome 1520), one of the most famous Renaissance painters, who passed away at the age of 37, continues to amaze over the centuries. What arouses wonder, more than anything else, is not only the great skill with which the artist created his works, but what they still continue to give us in terms of emotions and real revelations. The last one, in temporal order, emerged with the restoration of this wonderful fresco, made between 1512 and 1514. And it could even be the last painting by the artist. “Sibille and angels”, a work strongly desired by the great banker and patron Agostino Chigi, who with the painter from Urbino established a real solidarity pact.

Antonio Forcellino affirmed it, the one who, in the various phases of the restoration, discovered, in the fresco, details so far unknown. Among these, a grotesque and gold decoration of the pilaster that frames it, previously hidden by the plaster. But what most impressed the restorers were the engravings that Raphael made directly on the work. A detail, the latter confirming the artist’s great skill.

Antonio Forcellino, born in Vietri sul Mare (Salerno), in 1955, is one of the greatest European scholars of Renaissance art. Great master of restoration, his hands “worked” on masterpieces such as Michelangelo’s Moses, the Arch of Trajan of Benevento, the facades of the Cathedral of Siena and the Cathedral of Orvieto. He was also responsible for the discovery of Michelangelo’s autograph of the statue of Pope Julius II.

Always attentive to all the richness of making art, to historical contexts, to techniques and materials, to the psychological and biographical roots of great masterpieces, Forcellino was elected member of the Committee for the celebrations of the 500 years of Leonardo da Vinci’s death, promoted by the Ministry of Cultural Heritage and Activities. But the well-known restorer and architect is also the author of numerous books. Michelangelo Buonarroti. History of a heretical passion (2002); Raffaello. A happy life (2006); Leonardo. Genius without peace (2016); The last days of the Renaissance (2008); The lost Piety. History of a rediscovered masterpiece by Michelangelo (2010); The century of giants: The marble colossus (2019), to name a few. In this interview, the great master reveals the details of Raphael’s masterpiece just restored to italiani.it readers, and also talks about his love for art and the Renaissance.

Doctor Forcellino, how long did it take for the restoration of the work “Sybils and angels” and what are, in detail, the discoveries that it allowed to bring to light?

The works lasted three months, if the two of the lockdown are excluded. The most relevant discovery regards the grotesque decorated pilaster, which had been covered in the seventeenth century. It was, to all intents and purposes, the “introductory” part of the fresco and gave monumental and three-dimensional spatiality to the painting. The discovery of the “direct engravings” around some figures was also very important. Raphael painted them without the help of the preparatory cartoons.

What does the painting mean?

It represents the announcement of Christ’s coming to earth and his resurrection. According to Christian tradition, some Sibyls had predicted the advent of Christ in their responses.

What tools were used to perform the restoration?

Decorations were freed with the help of scalpels that separated the traces of original pictorial film from the superimposed layers. The consolidations were made with hydraulic mortars. But the real tool used in this restoration was the critical judgment, which prompted us to investigate the pilaster. While writing my latest novel on Raphael, “The pearl clasp”, I sensed that the artist had done a much more important job for his client and friend Agostino Chigi, so I designed a restoration that would also be cognitive.

You are the author of numerous books dedicated to the great masters of Italian art. Who is the artist you feel most attached to?

It is perhaps Raphael, for his ability to turn everything for good. Raphael is a man who sees a happy and perfect world, and gives it to us. This is an invaluable gift. I am very close to him also because, today, he is the least known by the general public. Everyone thinks he was just a good painter. Few people know that he was a great innovator and, in certain aspects, revolutionized painting and the way of conceiving it.

The courage of the Renaissance

The trilogy “The century of giants” is dedicated to the greats of the Renaissance. What characteristics do the characters that inspired it have in common?

The artists of whom I wrote the biography, and around whom I set my trilogy “The century of the Giants”, have in common an extraordinary ambition, a desire and ability to cross the limit in front of which other men stop. Leonardo, Michelangelo and Raffaello were able to explore territories unknown to others and they did so also in strong competition with each other. A competition that must be considered positively as a stimulus to overcome and improve the research of contemporaries. I believe that this boundless ambition, this superhuman courage, is the characteristic feature of our Renaissance. Not only of the artists, but also of the clients and, in general, of the Italian ruling class. Factors that are completely missing in today’s Italian society.

You have also restored Michelangelo’s Moses. What did that experience give you?

I remember the fascination of the discovery of the secrets of Moses linked to the parts that are not very visible from below. That experience gave me the privilege of entering a world closed to everyone else.

I would like to restore the pulpit of the Cathedral of Siena, because I don’t like how it was restored and I believe it deserves more attention and intelligence. Today it appears very decompensated and the complex sculptural narrative appears mortified.

What is art for you?

For me, art is the wonderful world where I had the privilege of living my daily life. Art is the sublime coldness of marble, the color revealed by a cleaning on a fresco and the stimuli offered to that world that produced these works. In short, for me art is everyday life. It is the greatest privilege that can touch a man.